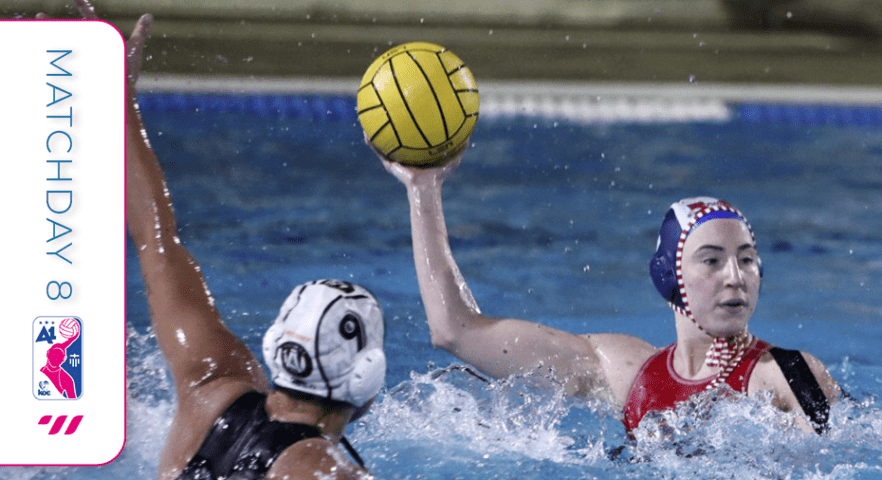 Before today, two teams in the Greek A1 were unbeaten.

On matchday eight, however, Olympiacos ended Alimos’ dream start to life in Greece’s top division with a crushing 20-5 victory that reaffirmed Olympiacos’ status as the best team in Greece.

This excellent performance by Olympiacos is timely, as they will travel to Rome for their first round of Champions League games, hoping to defend their title from the previous season.

Elsewhere in Greece, Vouliagmeni bossed their visitors from Crete,Rethymnou, with a 24-5 victory. Glyfada held off Panionios (13-7), while PAOK did the same against AEK (11-8).  Ethnikos made no mistakes against the Patra Dolphins (12-8), while Larissa picked up just their second win of the season over Peristeri (10-7).

Ethnikos and Glyfada both make their way to Budapest, and to Margaret Island next week for their Group B Champions League Preliminary Round 2 Clash. Vouliagmeni will accompany Olympiacos to Rome

Olympiacos’s absolutely world-class performance against Alimos dashed any hopes of a close match between the two unbeaten teams in the league this evening.

Tonight, the reigning Greek and European Champions demonstrated their superiority over the league’s newcomers in every facet of the game.

After eight minutes, it appeared that Alimos had found a way to keep Olympiacos out, but in the following sixteen minutes, the ruthless and dominant side of Alexander Ciric blew Alimos out of the water in a lopsided performance.

Eleni Xenaki, one of the best Centre Forwards in Europe over the past eighteen months, scored five outstanding goals in the game, while her backup, Maria Myriokefalitaki, scored four. Stefania Santa continues her excellent start at her new club, with another three goals.

The manner in which Alimos were defeated tonight is disheartening and demonstrates that they still have a ways to go before they can contend for national titles. Nevertheless, their winning streak up to this point was extremely impressive, especially for a newly-promoted team.

Vouliagmeni continues to pick up points in the Greek A1 with a dominant display over NC Rethymnou.

Ekaterina Tankeeva was the highest scorer in the match with five goals, while there were three goals apiece for Eleni Elliniadi and Despina Andreadi.

Kiki Liosi’s team will now prepare for their Champions League bout in Ostia, Italy, where they will face Olympiacos, SIS Roma and De Zaan.

Glyfada held off a small revival from Panionios to secure a fourth league win in a row.

Dutch International, Iris Wolves, led the scoring for Thodoris Andreako’s side, with four strikes in the game.

Alongside, Olympiacos, Ethnikos and Vouliagmeni, Glyfada are in Champions League action next week. They are coupled with Ethnikos in venturing to Budapest.

PAOK has its second win of the season, after a deserved 11-8 victory over AEK.

In a game that was tight for most of the match, Iro Karypidou was the match winner for Panagiotis Vergos’s side, netting five goals in the game.

Though PAOK started out ahead, AEK was able to pull within striking distance before the home team pulled away for a crucial victory. The first half ended with a score of 5-4, but AEK managed to pull it back to 8-7 with just under six minutes to go.Three late, unanswered goals gave PAOK the win..

AEK’s sole point this season was played out in a 9-9 tie with Rethymnou, nearly a month ago. They had to play the majority of the game without their coach, Marko Misic, who was dismissed for arguing with the officials.

Ethnikos have their fourth straight victory in the league with a tightly-fought 12-8 victory over Patra.

The Blue-Whites were pushed hard by the Dolphins, who trailed by a single goal in the third period, but with two of Ariadne Karabetsou’s three goals in the game coming in the last, that was enough to secure the points for Stefanos Leandros’s team.

Up next for Ethnikos is a game tomorrow against Larissa. They’ll expect to win that contest ahead of their  crucial Champions League visit to Budapest, where they will face the hosts UVSE, Greek rivals Glyfada, and Spanish side Mediterrani.

It was honours even after the first sixteen minutes of the match (4-4), however, a big last period from Kostas Galanopoulou’s side saw them outscore Peristeri, and claim their second win of the season.

Peristeri face a trip to Patra next, while Larissa’s game against Vouliagmeni will be rescheduled due to the Nautical Club’s involvement in the Champions League.