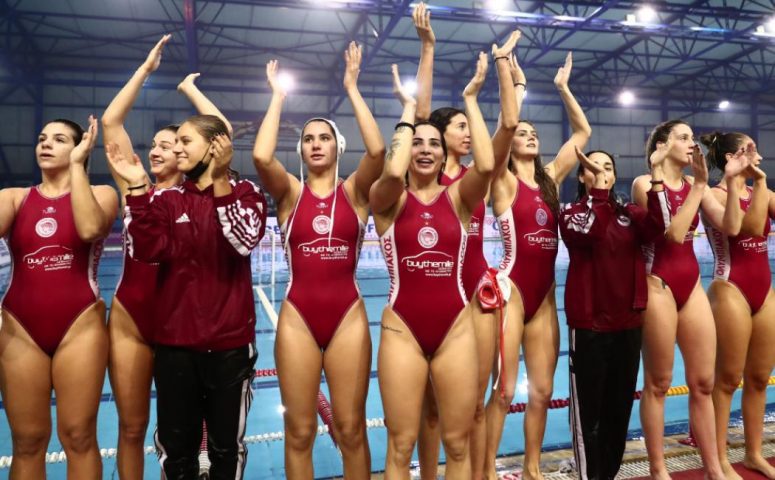 Olympiacos will fight to retain their European title in the Euro League final after seeing off UVSE 18-11 in today’s first semi-final. They had to be at their best today against a spirited UVSE side that made the hosts really work for the win. However, ultimately, the quality the two-time Euro League winners had was enough to see them through against a very young UVSE side.

The standout player for UVSE was Rita Keszthelyi, who found the net for the Hungarians a staggering nine times. It was a particularly impressive achievement given how well the Greeks defended at certain points in the game.

Olympiacos deserve to be in what is their second successive final, but they were worked hard. They amassed a decent lead early on and shut out UVSE from creating anything of any real substance. In the second half, UVSE managed to find a way through with more frequency, but they did struggle to create enough throughout the game to really worry Olympiacos.

Before the game, the atmosphere inside the Papastratio Hall was immense. The stands were packed with a large number of spectators, nearly all of whom were supporting the home side, with the famous call and response of ‘Olympiacos, Olympiacos’ roaring around the stands. 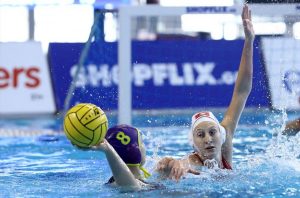 Olympiacos were the better side to begin with, and made full use of their advantage and defended well. UVSE had some decent shots on goal, but would probably have been satisfied to only be trailing by two scores after the opening period.

However, Olympiacos built an unassailable lead early in the 2nd period that really knocked the stuffing out of UVSE – who at this time struggled to create anything in attack. Every time the Lilacs tried to build an attack, it seemed inevitable that the ball would be coming back dangerously in the hands of a white Olympiacos hat.

UVSE had a little resurgence at the end of the half that carried through to the third quarter. They were the better side in the third period, but it didn’t translate into a significant comeback on the scoreboard.

There was a brief moment at the start of the fourth period where you thought that UVSE might come back into it when Keszthelyi netted her remarkable eighth goal in the game, but two quick scores from Olympiacos essentially wrapped the game up from there.

Olympiacos will now await the winner of this evening’s second Semi-Final between Sabadell or Plebiscito Padova.

The reigning champions started brightly. UVSE’s captain, Gabi Szucs, was caught impeding in the pit, and Eleni Xenaki made full use of the forthcoming man-up with a rifled shot that hit the underside of Alda Magyari’s goal before heading in.

However, UVSE came to play, and Natasa Rybanska finished from close range from Brigitte Sleeking’s exclusion to pull the score level.

The Greeks restored their lead almost immediately through Christina Siouti’s shot that Magyari could only divert into her own net, before Vasiliki Plevritou picked her spot right in the top left-hand corner after some swift passing to give Olympiacos a 3-1 lead.

UVSE were struggling with the 6 on 6 attacks, with Rybanska working really hard in the pit, however a fantastic turnover from Kamilla Farago led to Kyra Christmas giving away a penalty in an attempt to recover the ball that Rita Keszthelyi would never miss.

But Olympiacos got the next score to restore a two goal lead. It was Maria Myriokefalitaki with a typical centre-forward turn, and then finish beyond Magyari. Moments later she had a backshot that rattled off the left post, which was a massive let off for the reigning Hungarian champions.

UVSE had a few half-chances on goal, firstly from Kamilla Farago on the man-up on the left, and then Keszthelyi from a tight angle on the right, but Chrysoula Diamantopoulou was barely tested and made the saves with comfort.

Margarita Plevritou then scored a beautiful lob from position 2 on the right, but then gave UVSE a goal when she excluded; with Rita Keszthelyi-Nagy’s beautiful leaning bounce shot evading Diamantopoulou. 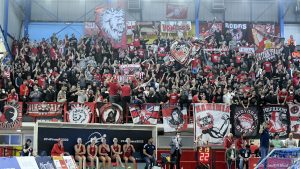 The second period started very badly for UVSE, with Marton Benczur’s side gifting Olympiacos a goal far too easily . When Natasa Rybanska was excluded from CB, the Hungarians did not react quick enough, leaving Eleni Xenaki completely unmarked on 2m to score her second of the game.

Then within seconds, Olympiacos were back on the attack. Vasiliki Plevritou was afforded far too much time on the top, and made it 7-3 to the hosts. And before UVSE could mount another assault on the Olympiacos goal, it was 8-3 to the Greeks –  Maria Myriokefalitaki grabbed a second from the pit, after a period of sustained pressure from the Red-Whites.

Mid-way through the second period, after both teams had worked hard for a significant period of the game, both coaches call time-outs without, however, having too much of an impact. 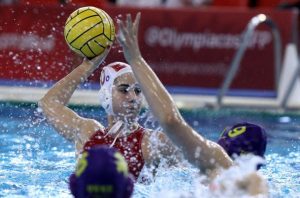 And while both keepers made decent saves, a goal was finally scored by Olympiacos courtesy of the America, Jordan Raney – who beautifully bounced her shot past the outstretched arms of the UVSE keeper.

At 9-3, UVSE really needed to start making use of the chances that came their way, and while Farago fluffed her lines on the man-up, a great long ball over the top from Alda Magyari found Rita Keszthelyi-Nagy – who scored 1 on 1 for her third of the game.

Suddenly a big chance fell UVSE’s way again when Panni Szegedi also had a 1 on 1, but Chrysoula Diamantopoulou made an outstanding close-range save. The Greek keeper, however, could not keep out another goal from Keszthelyi to bring UVSE back within 4 goals.

With a minute left in the quarter, and indeed the half, Margarita Plevritou scored her first of the game, wrong footing the UVSE defence to make it 10-5. While Olympiacos had the last say in the quarter, UVSE had improved massively in the last two minutes, showing that Olympiacos could not be too comfortable and rest on their laurels.

To start the third, Farago got UVSE on the front foot with one of her typical steals, and Dora Abel-Antal’s shot looked for all the world that it would go in, but for an outstanding stretching save from Chrysoula Diamantopoulou.

Diamantopoulou then thought she got down well to save to another Rita Keszthelyi-Nagy shot , however VAR was correctly consulted that the ball had actually crossed the line – something that most missed in real time.

So at 10-6, UVSE were right back in it, and you could really feel the momentum shift. And with the momentum, another goal came, via a Rita Keszthelyi-Nagy for her sixth of the game.

Olympiacos needed something to remind UVSE who was in charge, and Nikoleta Eleftheriadou stepped up and made it 11-7 to the Greeks with a cheeky no-look shot. The goal did the trick and halted the Hungarian’s momentum as Kyra Christmas popped out from the post to score shortly after for Olympiacos to make it 12-7.

No sooner had Olympiacos reinstated their 5 goal lead, did they make it 6. Time was running out on their man-up, but Vasiliki Plevritou placed her shot confidently into the top-right corner to give Olympiacos breathing space. 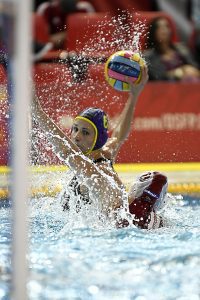 17 year old Eszter Macsai made her impact in the game with a backshot goal she will remember, but Eleni Xenaki’s effort from the centre-forward position gave the home fans something big to cheer, as Olympiacos now led 14-8.

However, the fans were silenced with 2 seconds to play when Rita Keszthelyi-Nagy showed why she is considered to be one of the greatest players in the world, when Alda Magyari launched the ball up field, the most delicate touch from Keszthelyi diverted the ball beyond Diamantopoulou in the Olympiacos to end the third period at 14-9. 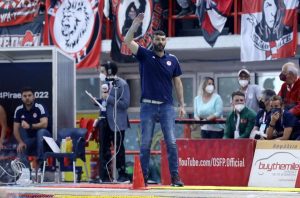 UVSE needed to start the last period with a goal, and they did, from (guess who), Rita Keszthelyi. It was her eighth goal in the match, which even by her very high standards, is incredibly impressive.

But when Nikoleta Eleftheriadou unexplainably found herself on her own, clear on goal, she was never going to miss, and made it 15-10. And moments later, when Dora Abel-Antal was dismissed, Kyra Christmas converted with a finesse shot on the right to all but seal the outcome of the game.

Two Plevritou goals (Vasiliki and Margarita) separated Rita Keszthelyi-Nagy’s incredible ninth goal of the game – which were the last scores in the game.