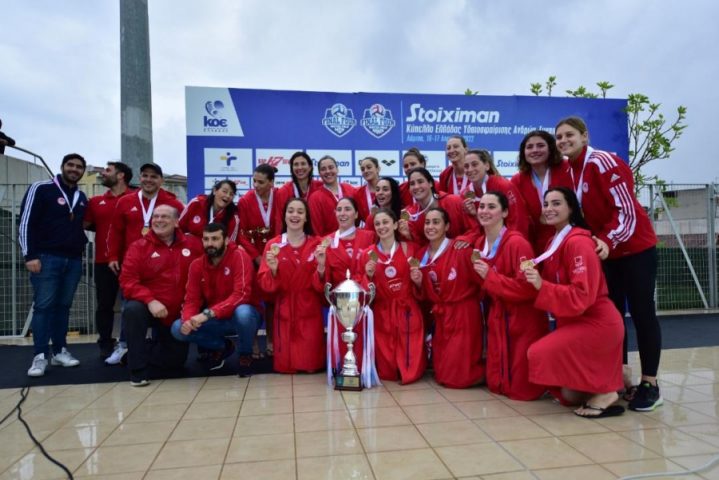 Olympiacos have won their third major title this season, beating ANO Glyfada 14-7 in the Greek Cup Final in Larissa this afternoon.

Elena Xenaki was the top scorer in the game for Olympiacos, scoring four goals, while Nikoleta Eleftheriadou, Vasiliki Plevritou and Kyra Christmas all netted braces.

Glyfada were decent for a short period of time in the back end of the 1st period, but after a really damaging second period, they could never really recover.

All Olympiacos need to do now for a historic quadruple is to secure the Greek domestic League. Under Alexsandr Ciric this season, they have already won the Euro League, the LEN Super Cup and now the Greek Cup.

Olympiacos were strong from the start, rushing to a 3-0 lead. Christina Siouti scored the Red-Whites their first within a minute, before Elena Xenaki doubled their initiative from a 5m penalty. Maria Myriokefalitaki then made it three, putting Glyfada on the back foot.

However, there was a big momentum shift towards the end of the period – Eleni Antoniadi and Ilse Koolhaas got goals back for the team in white.

Edina Gangl, the veteran Hungarian keeper, then kept Eleftheria Plevritou’s penalty out, before the extremely talented young Greek international, Irini Ninou, managed to convert her 5m penalty, to level the scores up at the end of the quarter.

However, it seemed like that comeback had taken a lot out of the Glyfada team, as like in the opening quarter, they then conceded three goals on the trot; Xenaki, E. Plevritou and V. Plevritou all were on target, to put Olympiacos Piraeus 6-3 up.

The real gap was opened up with two scores from Nikoleta Eleftheriadou – who scored twice in under a minute to put her side 8-3 up at the end of Q2.

The third period was fairly uneventful. Stamatina Kontogianni and Angeliki Grigoropoulou both scored in hope of reviving their side, but Kyra Christmas established herself on the scoresheet, putting the score at 9-5 before the end.

If Glyfada wanted to turn the game on its head, they desperately needed a strong start to the 4th. But they couldn’t make up enough ground from the off. Irini Ninou’s second goal of the game was made irrelevant by scores from Xenaki and Christmas, before two of the Plevritou sisters (Vasiliki and Margarita) added further goals to really rub salt in Glyfada wounds.

The cherry on top for Olympiacos was the fourth and final goal for Eleni Xenaki, who has been a wonderful signing for Alexsandr Ciric. The game finished with the current European Champions double scoring the side from the Athenian Riviera.

Olympiacos are just one trophy win away, the league title,  from winning an incredible 4 major titles this season – however, there is still much water polo to be played in the domestic league. Their closest rivals are Ethnikos Piraeus, NC Vouliagmeni and ANO Glyfada.