Olympiacos defeated Novi Beograd 12:9 in Belgrade in the “super derby” of the Champions League 2nd round in Group A.

The second round offered a lot of thrills. Serbian champion Radnicki and silver-medalist in the 2021 Champions League Ferencvaros shared the points 11:11. Radnicki, the home team in this match, was four goals down, but it earned a point.

Everything was open until the very end of the encounter between Brescia and Barceloneta. Brescia prevailed at the end – 14:12.

Jadran Split defeated Dinamo Tbilisi, but the margin at the end of the game was smaller than expected – 15:13.

After two rounds, Olympiacos is the only team with all six points.

Both teams had ups and downs in the derby in Belgrade. Still, Olympacios dictated the pace and was almost always in front. Novi Beograd took the lead only once – Dusko Pijetlovic found the net for 2:1 in the 4th minute. After that, the Greeks kept the hosts goalless for more than eight minutes. Olympiacos produced a 5:0 run and gained a big 6:2 lead in the middle of the second period. However, Novi Beograd, boosted by great fans’ support, managed to come back, and scored three goals in the last 03:24 minutes of the first half. Just 0,2 seconds before the middle break, Pijetlovic added his second goal for 5:6.
But, after the middle break, the Greeks silenced the fans of the home teams. Their defense, commanded by Marko Bijac worked perfectly. Early in the third period, Genidounias and Filipovic gave Olympiacos an 8:5 lead. In the middle of the quarter, the hosts lost one of its best players, Dusko Pijetlovic, who was red-carded. By the end of this period, Genidounias scored two more goals, and the visitors earned a 5-goal advantage (10:5).

But, Novi Beograd tried to come back once more. Nika Shushiashvili scored two goals n the opening minutes of the fourth period. The hosts’ captain Dusan Mandic made it 8:10 in the 29th minute, while Shushisashvili found the net shortly after for 9:10. But, the Serbs couldn’t keep their momentum. Two minutes before the end, Chrysospathis scored for 11:9. FIlip Filipovic fired the shot from a distance with 81 seconds to go for 12:9 and closed the game.

Olympiacos had 12 players on the roster because Dervisis’ suspension from the last season hasn’t expired yet. Besides, Djuro Radovic wasn’t on the team because of FINA’s suspension. Olympiacos still hasn’t received official information about suspension, but the club’s coach Theodoros Vlachos said that Radovic probably wouldn’t play for Olympiacos until the end of the season. Radovic was punished because he didn’t deliver the necessary files for FINA And WADA (World Anti Doping Agency) to know his exact location at any moment.

“We had serious problems with the team due to the suspensions, but we played a really good game against a great team composed of excellent players. This is a great win because we beat a strong opponent, which is difficult to defeat in their pool”, Olympiacos’ coach Vlachos said.

The game was played in front of packed stands.

“I thank very polite spectators. We played in front of our friends, not in front of our opponents. I enjoy coming to Belgrade and playing with my teams here. But, I haven’t had many opportunities to win in Belgrade. This time, it happened. We are happy because of a win against the quality team”, Vlachos underlined..

“It’s nice to come to my home town Belgrade, and it’s even better to win here. Our defense in the first three quarters was decisive for the outcome. We played good defense even though we had only 12 players. Our goalkeeper Bijac was outstanding. We recorded a big win, but this victory means nothing. The season is long, the road to the Final Eight will be difficult. As for Novi Beograd, which is directly qualified for F8, I am sure that they will reach a much better form until the Final Eight.”

“The atmosphere in the pool was spectacular. But, we failed to take advantage of that. We were nervous, especially in attack, made mistakes, and didn’t find the right solutions in front of Olympiacos’ goal. We were chasing Olympiacos all the way and even managed to cut the deficit twice. But, Olympiacos is a team that plays simply, stabile and concrete. It’s hard to come back in the games against the teams like Olympiacos is. We have to learn from our today’s mistakes and prepare better for the next match.”

Radnicki proved that it would be one of the strongest contenders for a spot at the Final Eight. The hosts earned a point against Ferencvaros, although they were four goals down three and a half minutes before the end.
The first two periods were relatively balanced. The lead was constantly changing the side, but the distance between the teams was never bigger than a goal. In the 20th minute, the score was 7:7, and then Ferencvaros started controlling the match. Damonte gave the hosts an 8:7 converting a man-up, while Ferencvaros dominated the first half of the final quarter. Experienced Jansik, Varga and Vamos scored goals to give the Hungarians an 11:7 lead with 03:59 remaining on the clock. It seemed that the contest was over.

But, Radnicki didn’t say its last word. Step-by-step, the hosts came back, and they reduced the gap to one just 63 seconds from the end (10:11). Ferencvaros’ Jansik hit the post with 33 seconds to go, and Radnicki had the last chance to secure a point. Only 14 seconds before the final buzzer, Milos Cuk netted an equalizer for 11:11 and the home fans started celebrating. 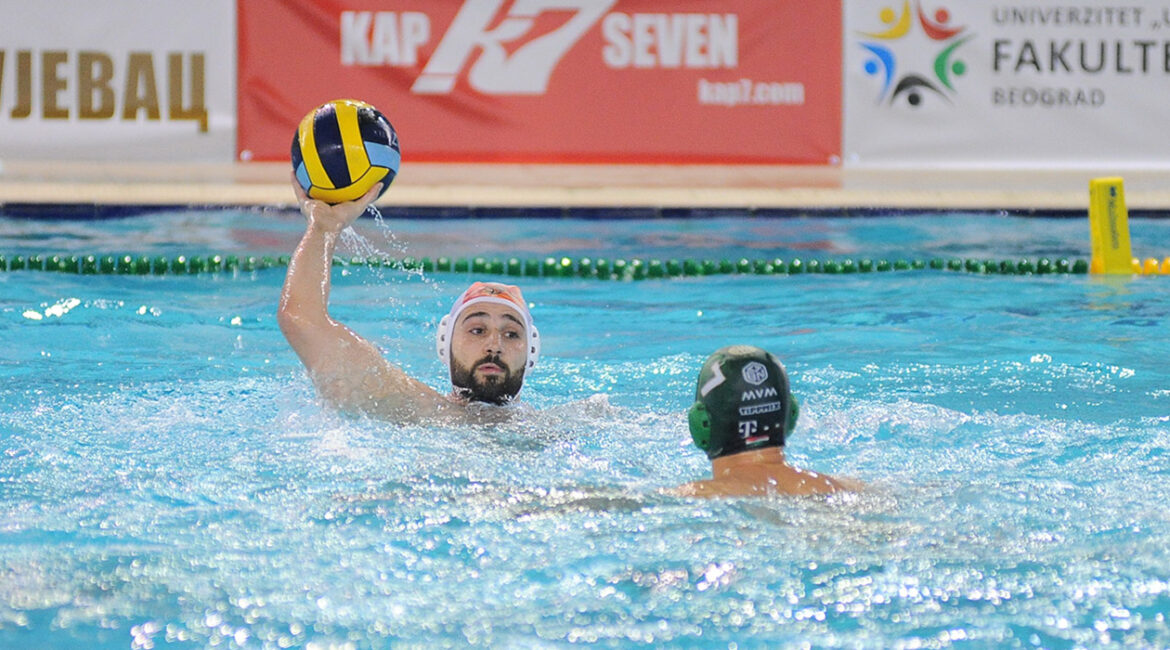 Brescia recorded the first win in the season after a big battle with Barceloneta. The Italian champion was in front for most of the time, but the game was an even contest. Until 8:8, it was an exchange of goals. Brescia earned a 1-goal lead eight times, but Barceloneta equalized on each occasion. After Barceloneta’s eighth goal, Brescia netted three and had a solid 11:8 lead before the final eight minutes. That wasn’t the end of the hosts’ series, because they increased the margin to four early in the fourth period. However, Barcelona didn’t give in. The Spaniards came very close to the rival in the 30th minute(12:13) end the game entered the thrilling ending. After a few missed chances on both ends of the pool, Alesiani decided everything seven seconds from the end with a goal for 14:12.

As expected, Jadran Split defeated Dinamo. The hosts built a big advantage before the final eight minutes. But, they ran out of gas for the fourth quarter. Still, Jadran saved the win.

Dinamo kept up with Jadran in the first 12 minutes. In the middle of the second quarter, only one goal separated the rivals (Jadran had a 5:4 lead). However, Jadran proved who the boss was in the following minutes. The hosts dominated and went to 14:7 before the final period. Five and a half minutes from the end, the score was 15:8, and everybody thought that the match would have a quiet ending. But, Dinamo scored the last five goals in the match. The visitors trailed 13:15 in the 30th minute. But, they didn’t go further, Jadran kept all three points.