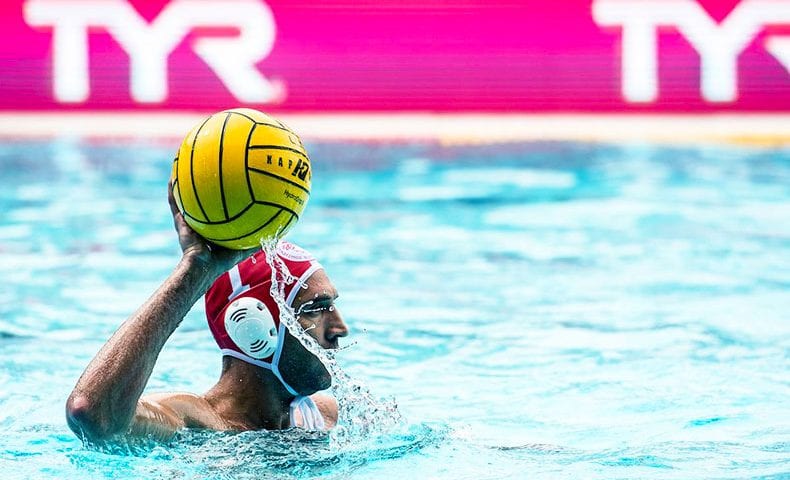 All eyes are on Piraeus where the title-holder Olympiacos Piraeus (GRE) and the 2017 champion Szolnok (HUN) clash in a match which might turn out to be a live-or-die encounter.

Since only the top three can make the Final Eight from Group B, this is an absolutely crucial encounter for these two, seeded third and fourth respectively, currently with even points. The loser might find it difficult the catch up with the others in the remaining four rounds.

In Group A the game of Recco (ITA) and Barceloneta (ESP) promises a brilliant battle, though unlike Olympiacos and Szolnok, these two sides should not worry about making the cut. Recco is in top form, just retained its Italian Cup title and ready to maintain its clean sheet in the League. At the same time, Barceloneta was badly beaten in the last round in Brescia (ITA) and another loss would threaten the Spaniards to slip back to the fourth places.

The other Friday match features an all-Hungarian clash which offers the last chance to host Eger to save some hopes to qualify. Ferencvaros looks much stronger, though, and another win might even put them on equal points with Barceloneta.

Brescia is on a tricky mission in Moscow (RUS). Though unlike last year Dynamo has already bowed out from the race to the finals, the Russians can still be a threat to anyone at home, even to Brescia which enjoys a 9-game unbeaten run in the League. In Belgrade Crvena Zvezda (SRB) also has a kind of last chance against 7th ranked Steaua (ROU) to earn its first points this season as in the last four rounds only tougher challenges await for the young Serbians.

In Group B the showdown of the champions is the absolute highlight. Olympiacos has a bit unbalanced season though the Greeks are still unbeaten at home (but won only one out of five away encounters). After a victory on Day 1, Szolnok had a five-game winless streak including a draw against the Greeks which saw a dramatic end with one goal apiece in the last 11 seconds. The Hungarians won their last three matches so they are definitely on the rise – so sheer excitements are guaranteed for Saturday afternoon.

Jug is set to go on winning against F8 host Hannover on Friday, while BPM (ITA) faces Mladost, that game also ended in a draw in Zagreb. For the Italian side, the win is a must now since they face the champions of the last three editions (Jug, Szolnok, Olympiacos) on the remaining days. Jadran and Spandau have no hope left to go through so it’s a battle of prestige where the Croats look for some revenge after their surprising loss in Berlin.

“A hardened Barceloneta is waiting for us. They will want to show that there is no such gap we saw in the first match at their home, especially in the first two periods as we both aim to win the Champions League. We are playing in Turin, an exceptional host that has always responded very well to the big water polo events: it’s been sold out for days and I’m sure it will be another show for our sport and its lovers.”

“This week we have not been able to train together nor prepare this match for the commitments with the national team. In addition, Recco is proving to be in a great moment and come to this match after winning the Italian Cup in a convincing manner and this sets up a very difficult game for us. Our last match in the league against Brescia was the worst of the season and our intention is to improve our performance in this game where Recco is the favorite.”

“This is the sixth time we meet Eger this season. We both know each other very well, we know it will be a tough game, but we need to collect these three points in order to reach our goals, to qualify to the F8!”

“This is the 10th day of the Champions League, it means that this is the play-off from here to the Final8. Ferencvaros is a really strong team, one of the best in the world. We will be at home, so we have to show 110%.”

“At the moment Brescia is in the top three Champions League’s teams because of its line-up and the game which they show. This team has high quality now. But our team has our own strengths too. We will play in our pool with the strong support of our fans so we have to demonstrate our best. We expect a great game.”

“We are back from a hard defeat in the National Cup’s final, where we faced an excellent team who played an excellent game while we did not play as we can. But now there’s no time to regret: in Moscow, we have a very important appointment, we want to reach the finals in the best position and we have to react immediately so we have to start again very strong. Dynamo is a very good team and we’ll do our best.”

“We really respect the Romanian team, although they have good players and they are very difficult opponents we will do our best to gain our first points in the Champions League.”

“My only concern at this moment is the team that I will field on Saturday since I have five players with flu.”

“Waspo has great individual quality but this season they play in ever-changing form. For the third season, we are playing in the same group and all our games were tough. This one will be the same. Hope we will continue with our winning streak.”

“It’s not easy to play against Dubrovnik. And it will not be any easier if the game is in Dubrovnik. We will try our best…”

“The defenses of both teams and the details in tactics are the two factors that will determine the final result of our game against Szolnok. The winner of this game will have a clear advantage in qualifying for the Final Eight.”

“This game will be a great challenge for us as we are playing in the home pool of the title-holder Olympiacos. The outcome of the encounter is very important for both teams, given that we stand with an equal number of points. We had two days to prepare for this game, as five of our players have been away with our national team. The good news is that Gergo Zalanki is healthy again, we can count on him too in this very important game. We are expecting to have a tough encounter, we will have to do our very best until the last minute for a good outcome.”

“My team is in good shape. We look forward to playing once more against Spandau. We should have won the game in Germany, we were leading throughout the match, but we lost in the end. The Regional League has one more round until the end of the regular season, we clinched the spot in Final Four and now we have a part of the in front of us where every match is important, both in Regional League and then in Croatian Championships. In LEN Champions League we don’t have a chance to go in Final 8, but we want to be at our best in every match since we want to grow…”

“Jadran Split is a tough opponent, when playing at home. They won against BPM Management and have already caused problems for many other teams. Nevertheless, we want to play concentrated and have to give everything to keep our position in the table.”

“We are going to meet a great team, a very strong opponent, that just has won the Adriatic League against the Jug Dubrovnik. There will be our ex-player Petkovic and for sure they want to do well. We have to play this game with a great determination as we did against Brescia in Bari in the Italian Cup. That was a big game because in such games our team always manages to give something more and the guys have to do it also now against another very valuable opponent.”

“Even it’s hard at this point to think that we will qualify for the Final 8 in Hannover for sure we won’t stop playing the best way we can in all our remaining games. We know Management from the game in Zagreb and we will use all tactical skills. We have to play a hard and good game and maybe we return home with three points.”