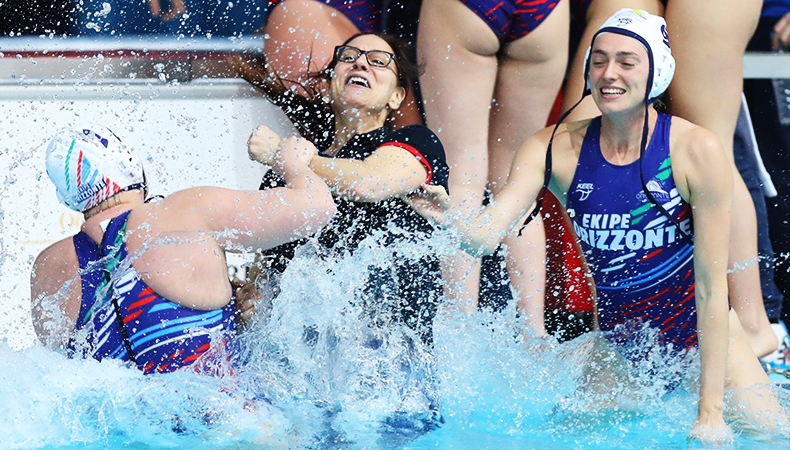 Europe’s most successful female water polo club Ekipe Orizzonte added another trophy to its treasury already featuring eight Euro League (Champions Cup) titles. The Italian side could lift the LEN Trophy after a hard-fought win over UVSE Budapest (HUN) in the final. This was the first time in the cup’s history that a female head coach – Martina Miceli – led the victorious team. Host Kinef Kirishi finished third.

Orizzonte lifted the first trophy of the European club season as they won an outstanding final against UVSE. A year ago, these two sides clashed in the Euro League Final Four tournament’s bronze medal match here in Kirishi, now they played for the LEN Trophy – both times the Catania based side could celebrate (last season they won in the shootout).

Though the Hungarians took a 2-3 lead in the first period, the second proved to be crucial as the Italians managed to kill their rivals’ man-ups in succession and score at the other end to gain a 6-4 lead by half-time. The Sicilian team could maintain its lead until the fourth period when Gabriella Szucs scored his third to equalise from their first possession for 8-8. However, Valeria Palmieri put away an extra immediately for 9-8, then came seven long minutes if huge physical battle but no goals. With 57 seconds remaining Roberta Bianconi hit her third from a man-up and that secured Orizzonte’s win, Kiley Neushul’s goal from a 6 on 4 came only 4 seconds before the end.

The Italians could celebrate a historical first for their club, this was the first time that they could clinch the LEN Trophy – 11 years after their last big European triumph, the record-breaking 8th Champions Cup (now Euro League) title. At the end of the game head coach Martina Miceli was tossed to the pool by her players – it was also a novelty in the competition’s history as Miceli became the first winning female coach here (and the second at the European stage after Alexia Kammenou led Greece’s Vouliagmeni to Champions Cup triumphs in 2010 and 2011).

Orizzonte, beating newcomer Sant Andreu in the semis with ease, claimed the Italian clubs’ 10th victory in the LEN Trophy. At the same time, they managed to halt the Hungarians’ march as the last two editions went to Magyar clubs, to UVSE in 2017 and to Dunaujvaros in the last season.

UVSE enjoyed a magnificent match in the semis and beat the home team – winner of the Euro League in the previous two years – Kinef Kirishi 10-8 on Friday. The Russians got some consolation in the bronze medal game where they took an 8-0 lead against Sant Andreu and never looked back.

Easter-time will see the other Final Four tournament for the Euro League, in Sabadell the host Spaniards face Padova (ITA) and the two top Greek sides, Olympiacos and Vouliagmeni, the latter two shall see each other in the semis.

Quotes from the last day

“We are absolutely happy. Orizzonte is a very successful club, but before we didn’t have the LEN Trophy. Now the team cannot stop and still continues to celebrate a victory. Regarding the final, first of all we won because we did a solid teamwork during the game, an even better one than yesterday in the semi-final. The final turned out to be very difficult and everything was open till the end.”

Marton Benczur, head coach, UVSE:
“I congratulate the team from Catania. It is a pity we could not get a victory, we were a bit unlucky today. Nevertheless, I want to congratulate my team too!”

“It was visible that at the end of the game we laid back a bit. It has to be avoided, despite of the substantial lead we got at the beginning. It could have become absolutely dangerous. It is a pity that it was a game for the third place, we prepared to play the other one today.”

“The first two periods were unlucky for us, but then we began to play better. Though against a team like Kirishi it is always quite difficult to do so. In general it was a very good experience here. For our team it was the first Final Four therefore each game served as a benefit for us.”