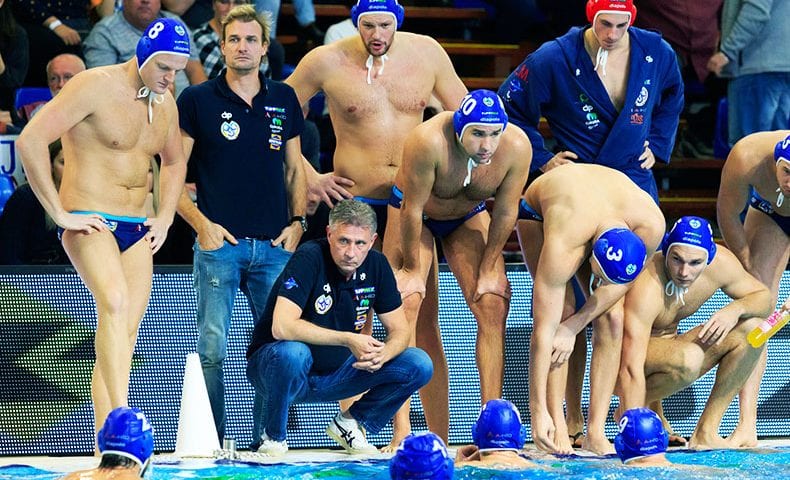 KSI got its first victory in the fifth round of the midseason, followed by two draws in other matches. OSC kept on proving its worth in the Upper Stage, while Miskolc and Eger shared the points.

The fifth round of the Lower Stage started early with KSI – Tatabanya clash. The match started promising for Tatabanya as they scored three goals against KSI’s zero in the first quarter. In the second quarter, János Horváth’s boys turned the tables, scoring with Pető and Schmölcz on top. From that moment, the lead remained in KSI’s hands.

Meanwhile, two other games were played. Kaposvar played a draw with PVSK (11:11), the same as AVUS v Racionet who ended up with the same score.

In the last match, Vasas struggled against Szentesi, losing by a five-goal difference at the end of the match – 5:10. Szentesi’s head coach commented:

“Motivated by recent games, we wanted to continue our favorable performance, getting our hands on every point we could get. We already won at home, and I’m happy to see my team winning at the opponent’s pool.”

the first half of the match played between Szolnoki and BVSC, the third-placed team didn’t slow its momentum. Though the game was tight and the score kept on jumping the line between the teams, Szolnoki managed to win by a goal difference as Andrija Prlainovic led the attacks efficiently. The last two quarters were the most dangerous ones as BVSC showed some hard resistance, but it wasn’t enough to beat the great team. Zivko Gocic, the head coach of Szolnok, commented:

“We played a nice match and I was obviously pleased by the first half-time. Our defenses were at their best and we got that crucial goal which offered us the three points. We are now focusing on Spandau and the Champions League.”

The defending champion – FTC – rushed the game against Debrecen, beginning with 5:1. Until the break, Zsolt Varga’s team scored 10 goals, sending Debrecen spiraling down into the second half-time. Dénes Varga and Aaron Younger climbed the scoreboard with three goals each. Zsolt Varga commented:

“We started the match really well. We were firm at the back and effective in the attack. There were ups and down during the match, but we were fortunate enough to get back on our feet quickly and control the game. I am glad to see we are back in our element.”

The first-placed OSC played a killer game against Racionet, barely allowing the opposing team to reach their goal. 2:11 was the score, and many of OSC’s players got their names on the scorer list.

Last but not least, Miskolc and Eger played the only draw in the fifth round in the Upper Stage. After the equalizer, both Sike and Dabrowski gave an afterword.

“We fought a dramatic battle with Eger,” said József Sike. “There have been a few mistakes on our side, but so was on the other side of the pool. Both teams were facing a great opponent and we both have much developing to do. A lot awaits us in the future.”

“After the fiasco last week, we organized our ranks and started off very good with a three-goal lead. It was an important match for both teams since we are fighting for the middle-ranks at the moment and we are both approximately equally strong. By the end of the match, we got a little tired, and we were not playing at home, which affected us. But more challenges await, and we are looking forward to meeting them,” commented Dabrowski.