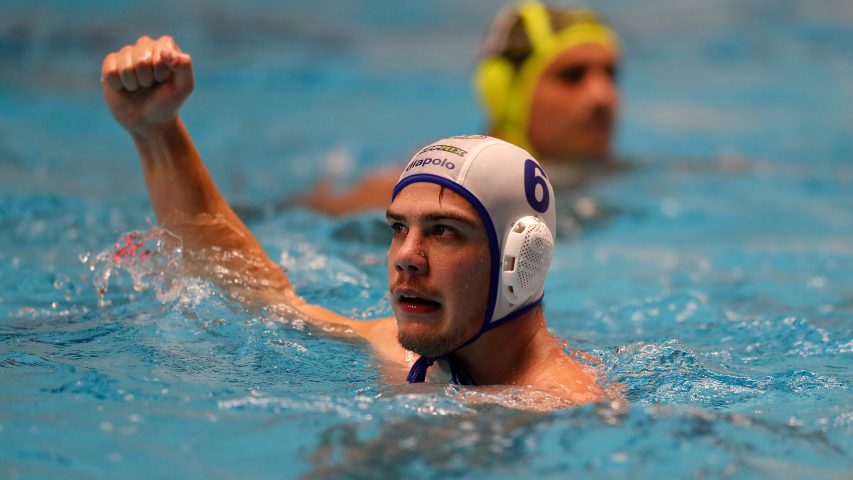 OSC earned the three points in a thrilling game and ended its bad run, after taking only one point in the previous three rounds (it suffered two home losses to Marseille and Recco and won a point in Hannover). Since there were no surprises in the other matches in Group B, the Budapest-based side consolidated its 4th place in the table. The Hungarians have won five points more than 5th-placed Hannover.

Steaua took its first points in the season. The Romanians defeated Crvena Zvezda 11:8. They caught up with Crvena Zvezda in points and moved from 8th place in the standings.

Besides four matches in Group B, the last game of the 6th round in Group A was played today. Novi Beograd defeated Dinamo Tbilisi with ease (17:8)

Jug and OSC were in a neck-and-neck race from the first whistle. Csacsovszky scored an opening goal, but Kakaris replied with an extra player. There were a few twists and turns in the first half. The lead was constantly changing the side, but two goals never separated the rivals. OSC earned a 5:4 lead in the 14th minute. In the next possession, Jug didn’t convert a man-up, and the Hungarians had a nice opportunity to double their advantage. Still, Popadic saved a shot from Burian. Less than 20 seconds after, Filip Krzic leveled at 5:5.

OSC opened the second half in the same way as the first – with an early goal. Mate Dala found the net to finish a counterattack. Jug answered with two goals from extra player shots (Argyropoulos and Zuvela) quickly and had a 7:6 advantage in the 18th minute. But, OSC dominated in the next few minutes. The visitors, led by Erik Csacsovszky, produced a 3:0 run and went to 9:7 (23rd minute). For the first time, a team had a 2-goal lead. The Hungarians had a man-up in their last possession in this quarter, but they didn’t convert it.

OSC stretched the margin to three shortly after the last pause. Erik Csacsovskzy scored from 6 meters, added the fifth goal to his tally for 10:7. Still, Jug came back into the game with two goals in a span of 50 seconds. Kakaris ended the hosts’ goalless phase that lasted more than six minutes. His fellow countryman Argyropoulos narrowed the gap to one (9:10) and the big battle continued. Five minutes from the end, MAnhercz found the net for 11:9. After that, there were no goals for a while. Jug played rashly in attack and wasted a few nice chances with an extra player. However, Kakaris converted a man-up at 01:43, and Jug trailed by a goal again (10:11). Burian replied 31 seconds after, also with a power-play advantage (12:10). It was clear that Jug couldn’t win three points, but the hosts still had a chance to secure a point. Marin Tomasovic scored for 11:12 with 44 seconds to go. In the remaining time, both teams lost the ball in their last possessions and OSC celebrated the minimal victory, while Jug suffered the second loss in the season.

Two days after winning the Super Cup, Pro Recco continued its winning streak in the Champions League. Recco, which played without a few experienced players (Figlioli, Loncar) was too strong for Hannover. The first quarter determined the rest of the match. The Italians rushed to a 5:0 lead in the first seven minutes. Hannover got on the scoreboard only 30 seconds before the end of the first quarter when Schuetze converted a man-up. The visitors were keeping a four-goal lead through the second period. After the big break, they dominated.

Marseille started slowly. Prlainovic scored the first goal in the match after only 24 seconds of play, but the French champion needed some time to break Spandau. The Berliners equalized three times in the first half (1:1, 2:2, 4:4). In the last two and a half minutes of the first half, Marseille scored two power-play goals (Kovacevic and Crousillat) to head into the third period with a 6:4 lead. They doubled the advantage by the end of the third quarter (9:5). Early in the fourth, Marseille stretched the margin to six (11:5) and there was no way back for Spandau.

Steaua got took a flying start. The hosts jumped to a 4:0 lead in the 10th minute. Crvena Zvezda, still without captain Milos Vukicevic, recovered from an opening shock and started coming back. The visitors netted three straight goals by the middle break and trailed 3:4 before the third quarter. Neamtu gave Steaua a 5:3 lead in the 17th minute, but the visitors responded with two and leveled at 5:5 midway through the third period. But, Steaua finished the third quarter in an excellent way. The hosts scored three goals in the last two and a half minutes of the period. Gheorghe added an action goal in the 25th minute, and Steaua regained a 4-goal lead (9:5). Crvena Zvezda didn’t manage to come back once again.

The 6th round in Group A has been completed by an encounter between Dinamo and Novi Beograd. The visitors arrived in Georgia without the most experienced players – Dusko and Gojko Pijetlovic, but they recorded an easy win. The Serbian team opened the match with a 3:0 lead. The hosts reduced the gap to two goals three times (1:3, 2:4, 4:6) in the following minutes. Then Novi Beograd scored three goals in a row, went to 9:4 to prove a big difference in quality between the two teams.