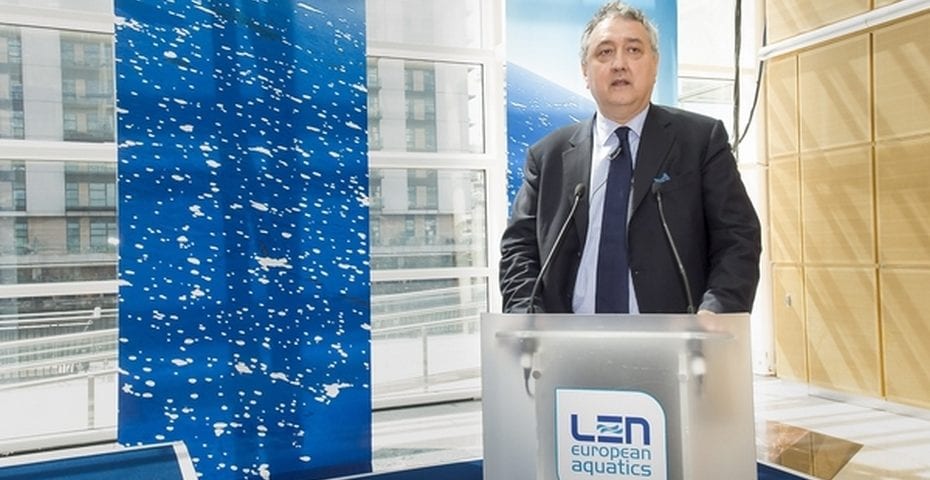 Paolo Barelli has been re-elected as LEN President for his third four-year term.

The 2020 LEN Elective Congress was held online today due to the coronavirus pandemic. Special software was used for the voting process

David Sparkes (Great Britain) will continue to work as LEN General Secretary. He has been in office since 2012, when Barelli was elected for the first time.

Fernando Carpena (Spain) is a new Treasurer. Carpena was LEN Vice President and Water Polo Liaison in the past four years. Carpena, who is the Spanish Swimming Federation President, replaced Tamas Gyarfas (Hungary), who was the LEN Treasurer from 2012 to 2020.

Paolo Barelli, David Sparkes, Fernando Carpena and Dimitris Diathesopoulos will represent Europe in the FINA Bureau from 2021 (and two more European candidates will be elected at the FINA Congress next June).

Barelli: We are on the right track

“Even if we came together only on the web, this Congress was once again the celebration of our unity and a sound approval on everything we have achieved so far. In the past years, European Aquatics enjoyed a really successful period and the benefits were significant. We were able to share those with our National Federations offering them financial support and with our athletes who could earn ever-­‐growing amounts of prize-­‐money at our events. They are the frontrunners in this success story, they deserve all credits for making Europe the No. 1 continent in aquatics.” 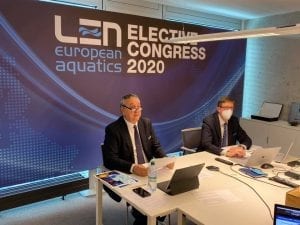 Paolo Barelli and Executive Director Gianni Minervini at the LEN headquarters during the webcongress Photo: LEN/FB

“We are on the right track to continue our stable growth” the LEN President added. “I know that this year has been challenging for all of us – and LEN wished to support its federations by distributing one million euros to ease the pressure the pandemic may have put on them. Still, I’m convinced that soon our life can get back to normal, all the pools will be reopen and we can enjoy the same vibe and excitement at the LEN Events as in the past.”

(The source of the quote: LEN Press Release)

-LEN General Secretary since 2012, was Bureau Member and Liaison for the Medical Committee since 2008.
-FINA Bureau Member since 2017, previously member of the FINA Disciplinary Panel.
-CEO of British Swimming between 1994 and 2017, led an organisation with 350 employees and a turnover excessing €45M.
-Oversaw bidding, preparing and delivering the 2016 European Aquatics Championships in London.
-Involved to bidding and organising the 2012 Olympic Games in London.
-Held numerous roles in British sport (including membership of the National Olympic Committee), was advisor besides the Government and the City of London in sport matters.
-Qualified engineer in thermodynamics and fluid mechanics, did post graduate studies in management and became a professional swimming coach and referee.

-LEN Vice President since 2018, Liaison for Water Polo, was Bureau Member since 2012.
-FINA Bureau Member between 2013-2017.
-President of the Royal Spanish Swimming Federation since 2008, before he was President of the Madrid Swimming Federation (2004-­2008), was member of the Federations WP Committee (1988-­1996) and chaired its Swimming Committee (1996-2000).
-Chair of the Organising Committee for the 2018 LEN European Water Polo Championships in Barcelona and Co-Chair of the OC for the 2013 FINA World Championships in Barcelona.
-Executive Member of the Spanish National Olympic Committee since 2013.
-COMEN Treasurer between 2009-­2018, Vice President since 2018.
-As a swimmer and water polo player he competed at the national level.
-Graduated as a lawyer, professor of sports law.

-LEN Bureau Member since 2016, Liaison for Swimming and for the Learn to Swim programme between 2016-­2018.
-CEO of the Danish Swimming Federation (2001-­2020), currently responsible for international affairs. Vice Chairman between 1993-­1999.
-Chair of the Organising Committee for the 2013 and 2017 European Short­‐Course Swimming Championships (Herning, Copenhagen)
-Vice President of Team Denmark (National Elite Institution) 2018 – 2020, since 2016, member of the Board. Team Denmark and NOC media committee member between 2006 and 2014. Member of the Board of Anti-­Doping Denmark (2009-­ 2012). Internal auditor of the European Lifesaving Federation (since 2016), Vice President (2012-‐14), then President (2014-­16) of the International Federation for Swimming Teachers’ Associations.
-Worked as swimming coach (assistant and head coach in various clubs), graduated as master of Political Science, then of Public Administration, has degrees in business economics and sports management.

-LEN Bureau Member since 2018.
-President of the Royal Dutch Swimming Federation since 2017, former President, now Honorary President of swimming club AZ&PC.
-President of the Royal Military Fencing Association (2005-­2016),
-Former swimmer, water polo player and pentathlete
-Active in CISM (International Military Sports Council) as organiser of major international tournaments (1995-­2016)
-Educated at the Royal Military Academy and graduated in addition at the University of Amsterdam (Certified Public Accountant) and the Nyenrode Business University (Master of Science in Management)
-Served in the Royal Netherlands Army, was on international duties in several continents, achieved the rank of General.

-President of the Croatian Water Polo Federation between 2010 and 2018 – called the new golden era of Croatian water polo with Olympic and World Championship gold medals – now Vice President responsible for international matters.
-Led successful bid for 2022 European Water Polo Championships to be held in Split.
-Board member, then President of water polo club Primorje Rijeka.
-Studied and worked in the maritime, then became a businessman and led a logistics company.

-LEN Bureau Member since 2012, Liaison for Water Polo.
-FINA TWPC Member between 2009 and 2017.
-President of the Serbia­‐Montenegrin Water Polo Federation between 2002 and 2004, Vice President between 2014-­2017. Director of WP Club Partizan Belgrade since 2001.
-Director of Directorate for Sports in the Ministry of Education and Sports (2004-‐ 2007), Deputy Minister of Youth and Sports of the Serbian Government (2007­‐2009),
President of the Sports Federation of Serbia (2009-­2017).
-Olympic champion and Olympic bronze medallist water polo player, World champion, 2‐times European Champion, 3x silver medallist, 2-­times World Cup winner, Champions League winner. Inducted to the International Swimming Hall of Fame in 2011.
-Graduated in the faculty of Mechanical Engineering.

-LEN Bureau Member since 2016, Liaison for Masters.
-Creator of the idea of LEN Swimming Cup, launched in 2020.
-President of the Luxembourgish Swimming Federation since 2014, was Treasurer since 2009.
-Chair of the OC for the annual Euro Meet, now Leg 1 of the LEN Swimming Cup. President of the Swimming Club le Dauphin Ettelbruck.
-Graduated in IT at the Institut Supérieur Economique de Jemelle, worked for various companies as System Engineer, Sales Executive, Team Leader, Senior Account Manager and Director in IT and Business Development.

-LEN Masters Committee Member since 2008.
-President of the Finnish Swimming Federation since 2013, Vice President in 2012, Board Member in 2010-­‐11, Member (2003-­‐2006), then Chair of the Technical Committee (2007­‐2013).
-President of the Nordic Swimming Federation (2013-14), member since 2012.
-Chair of the OC for the 2018 European Junior Swimming Championships in Helsinki and the OC for the 2014 European Junior Synchro Championships, worked in various roles in the organising committees for the 2000 European Aquatics Championships and in the 2006 European Short-­course Swimming Championships.
-Swimming referee at national level since 1991, FINA referee in swimming since 2007 and in open water swimming since 2011, was Chief Referee in OWS at European Masters Champs (2009-­2016), Technical Delegate for SW and OWS in 2018.
-Graduated in Mechanical Engineering, Industrial Engineering and Management.

(The source of the biographies: LEN Press Release)