Penalties the difference between Australia and Canada, the Dutch win comfortably

It took penalties to separate Australia and Canada in the second 5th/8th semi-final of the day as the Aussies came out winners after a tense game against Canada.

The game was on a knife-edge and both sides had chances to win the game, but five goals from Zoe Arancini in regulation time helped her side to the shoot-out, with Keesja Gofers converting the winning penalty.

Canada fought hard against an Australian side without their Head Coach, Predrag Mihailovic, due to a red card in the previous game, but Rebecca Rippon stood in to ensure her side beat Canada twice within a week.

Australia will face the Netherlands in the 5th/6th final after they cruised past China with ease in the earlier game. Maartje Keuning netted five to set up a reply of the group stage contest played earlier this week that Australia won by 15-12.

China and Canada will fight it out to not finish bottom of the classified nations.

The Netherlands put the disappointment of losing to Hungary in the quarter-final behind them to secure a well-deserved victory over China.

Maartje Keuning was by far the outstanding player of the match with five goals, however, Joanne Koenders in the Dutch goal was in fine form making 18 saves.

The first quarter saw only a single goal, but the Dutch pulled away in the second and never looked back.

It took nearly six minutes before we saw the first goal of the game, and it was the only goal of the first quarter. Yineng Shen couldn’t quite keep out Simone Van der Kraats’s central shot on the breakaway. China then had a glorious opportunity to convert from a 5m penalty, however, Joanne Koenders got down well to the right to deny Huan Wang. 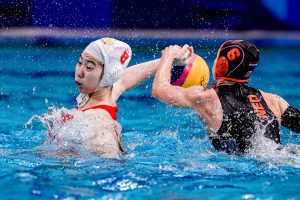 Despite the penalty miss from China, the game was incredibly tight with only a single goal being scored in the game. However, the Netherlands put a cushion between the two sides into the second period thanks to a hat-trick from Maartje Keuning in the second quarter. Sabrina Van der Sloot netted on the counter before Maartje Keuning converted a man-up from Ying Zhai’s exclusion.  Liwen Yu then scored China’s first goal of the game at the midway point of the second quarter but not before Keuning had made it four with a clever finish on the move.

Keuning couldn’t stop adding to her goalscoring tally twenty seconds into the third, as the Sabadell player was having perhaps her best ever game for the Dutch before Kitty Lyn Joustra of Cal Bears put away a technically fantastic backshot from the pit. Xiao Chen pulled one back from the pit too for China, but at 8-3 going into the last, the contest was really over.

Two goals from Zewen Deng in the last quarter made the score look half-respectable, but conversions from Keuning, Genee, Van der Sloot, Van der Kraats and Megens ensured that the Netherlands efficiently came out winners to fight for 5th place against Australia.

The battle between Australia and Canada couldn’t be settled during normal time in a game that was level throughout, and instead was won by Australia in a penalty shoot-out.

At times, both sides looked good for the win as the momentum of the game shifted with every attack, however, the dreaded penalty shoot-out was required and Australia held their nerve.

Canada played with passion and spirit, but they just missed out on matching their best-ever finish at the Olympics.

Shae La Roche put Canada on the front foot with an accurate shot from range, but Keesja Gofer levelled up in an equally nonchalant fashion from 6m. Monika Eggens and Zoe Arancini then added scrappy goals for each side to make it 2-2. La Roche’s shot was then diverted by Abby Andrews past Lea Yanitsas to give her a second goal that separated the two sides after the first eight minutes.

Four-time Olympian, Bronwen Knox, equalised two minutes into the second period with a fizzed bounce shot past Claire Wright and Australia then maintained the pace set by Canada when Amy Ridge’s finish cancelled out Axelle Crevier.

Then, for the first time in the game, Australia took the lead via an excellently executed backshot. They probably should have added another when they received a double man-up opportunity with a minute left in the first half, but Andrews’ shot was apprehended.

A Matilda Kearns exclusion with 15 seconds left in the quarter provoked a David Paradelo timeout – which was converted by Monika Eggens for her second of the day, to draw the teams level at 5-5 after two quarters.

Into the third, Emma Wright gave Canada a lead for all of twenty seconds, but Browen Knox took a speculative shot which was misjudged by the other Wright Sister, Claire, and the scores were level once more. 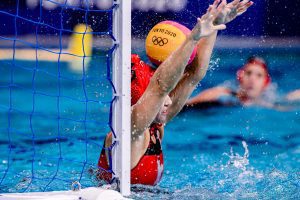 The Canadian will be scratching their heads at how Zoe Arancini found herself in acres of space on the far side in front of the goal, but the Aussie was most grateful for the sloppy defending and gave her side the lead with three minutes left in the period.

Australia’s lack of cutting edge costed them temporarily as Kyra Christmas’s shot took a horrendous deflection off Hannah Buckling’s block before dropping in, but ten seconds from the end of the quarter, the Aussies were back on level terms courtesy of Zoe Arancini’s third of the game.

Arancini went on a further goal spree into the last period to give her side the lead. Her beautiful cross-cage shot on position two gave Claire Wright no chance. Whilst Canada equalized yet again from an Aussie exclusion via Emma Wright, taking the score to 9-9, Arancini was giving the Canadian defenders no chance as yet another shot from her right arm nestled in the top right corner.

With two minutes left in the match, Kaleigh McKelvey pulled an unbelievable cross-cage shot out of the bag to make it 10-10, and Canada then had another time-out opportunity with fifty seconds to go to try to go for the win, but the sides were level at the end of regulation time.

McKelvey converted the first penalty for Canada, as did the standout player of the game for Australia, Zoe Arancini. At the other end, Joelle Bekhazi’s shot rattled the underside of bar but not over the line, allowing Amy Ridge to give Australia the lead in the shootout.

Axelle Crevier scored her penalty from 5m, as did Hannah Buckling.

Lea Yanitsas then stopped Emma Wright’s shot to give Keesja Gofers the chance to win the game – which she did.

Australia will now play the Netherlands in the 5th/6th play-off final, whilst Canada can secure 7th if they beat China in their play-off final.