PODCAST: Emmolo: “I love the way we (Italians) do our water polo” 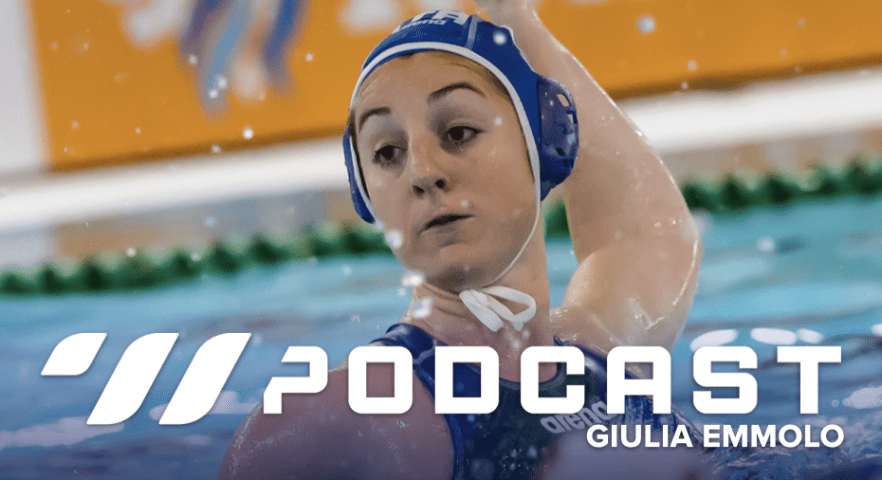 This week’s episode of the Total Waterpolo Podcast was with Giulia Emmolo, a key member of the Italian women’s national team and Ekipe Orizzonte.

Giulia firstly talks about her first moments with the Italian national team, competing at the 2007 World Championships as a teenager:

“I started playing with the young national team in 2006, and it was my first experience outside of Italy, and it was an explosion of emotion because I was very young, fourteen years old, and I had never played high level Waterpolo before. I realised that this kind of feeling I wanted to have for as long as I could, and because it’s something that you can’t get anywhere else. In 2007, I went to my first world championship with this senior squad in Melbourne, and I was a baby, but I remember every single minute that I was there because It was my first, and I felt like I was in another universe. Everything felt magical since I was playing next to the finest player in the world. So I was only trying to learn. As much as I possibly can.”

The left-hander on the Podcast then discusses the heroics of her first club, Imperia, as they climbed the Italian ladder to win the national title and LEN Trophy:

“And what we accomplished with my team was incredible. We started at the bottom and worked our way up to win the first title in the Italian championship. So we did something, I believe that cannot be repeated, and this is nice if you think you are with your teammates that you grew up with, we wrote the history, and we arrived to make people talk about Imperia in Europe. And no one knew where Imperia was, but we did it, and it was really nice.”

Emmolo talks on the Podcast how much she enjoyed her time in Athens, and how she has formed friendships for a lifetime:

“After nine years, I decided to move from this small town to Athens, and as you can imagine, I was like oh my god what have I done!? This was my best experience because I was playing with some of the world’s best players. They assisted me in maturing as a person and as an athlete. They give me a lot, and all I can say is thank you. I have very good relationships with almost all of them, and they are like my best friends. We talk every day, and I have a great relationship with the three Plevritou sisters; I am like the fourth in their family, and this is something you will remember forever, and all I can say is thank you. Because of them, I can now communicate with you in English. And we have a great time there when we are all together. I remember what we did in these three years, and it’s ah it’s ah amazing. I always tell the younger girls, if you have the chance to go outside of Italy, do it. Because it’s something that opened your mind and made you like a person, not just as an athlete”

But Giulia returned to Italy to play for Ekipe in the Italian League, which in her view is one of the top leagues in Europe:

“Last year I think we had a really good level because the top four teams were so strong. So l you are going to play for the semi-final and you are fighting for it. It’s not like a game that you know that you are going to win, and this improves the championship but also the players. Every Saturday is like a final where you have to prepare for every Saturday match. So every week is like ah with a different title. And it is not boring, you are fighting every Saturday for the three points that you need when you arrive at the end because every point counts at the end. Even for the schedule if you are playing at home or not this is very important when the playoffs start so I think that every Saturday and every week you are working hard for the match. So next year I think it will be the same or maybe better because maybe more foreigners will move, the level will be higher and we will enjoy it I think.”

And Giulia admits she is deeply proud of the Italian culture within water polo, and the tactics they deploy to win games:

“I love the way that we do our water polo. It’s very mental because we make a lot of hours of tactics to try the same movement until you can play without seeing your teammate in the eyes. You don’t need anything more because you try so much time that you can just feel your teammate, and what she’s doing you can read her mind and I agree with them. So we are one of the best teams. To do this kind of defence has helped us many times in the past. And we won a lot of medals because also the defence was very strong and you can keep your power in the offence when you are so strong in defence”

Later on the show, Giulia talks about her Olympic experiences, the highs of winning a silver medal in Rio to not being selected for the Tokyo qualification tournament. The Ekipe and former Olympiacos player also talks about the future of the Setterosa, as well as answering questions that you have sent in via social media.

Listen to our episode with Giulia now! All the episodes of the Total Waterpolo Podcast are available on all major Podcast streaming services, such as Spotify, Apple Podcasts and YouTube.
Don’t forget to head over to www.wearwaterpolo.com and use our discount code ‘PODCAST10’ for 10% off your next order