PODCAST: “Every match is an hour of fun” – Di Fulvio 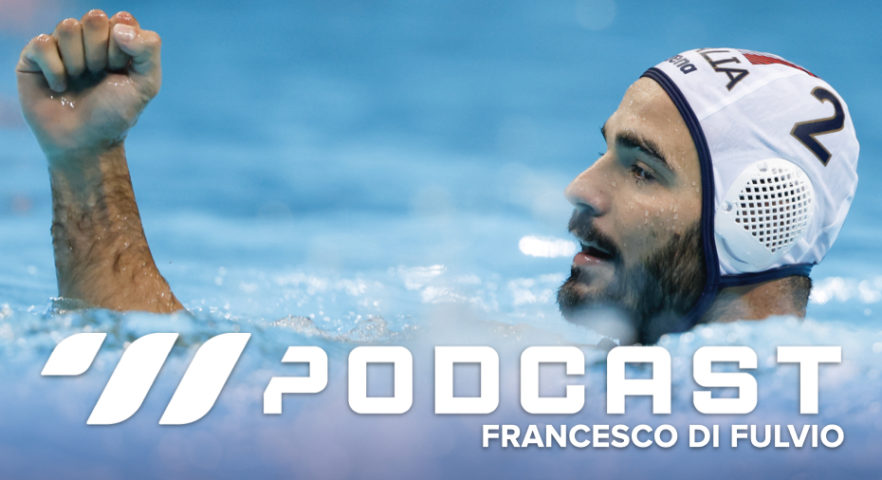 We are thrilled to release our first podcast episode of the new year, featuring our star guest, Total Player Award winner for 2022, Francesco Di Fulvio.

In an engaging conversation with the best player of the past year, the Pro Recco and Settebello star discusses a variety of topics, including a review of the previous season and his expectations for the upcoming one.

However, Francesco begins by discussing his water polo journey. Di Fulvio was born in Pescara, the home of one of Italy’s most successful teams. While his father played there for many years and the team enjoyed tremendous success, including winning the national championship and the Champions League, the team soon entered a period of decline, which saddens Francisco:

“The city has a great tradition; players like Manuel Estiarte have played there. So I wish they came back to the top division as soon as possible. I just played with the junior teams of Pescara because I left at 17 to go and play for Roma, which is where I started my pro career. My brother is playing for Pescara this season, and my father is now coaching the same team, but they are in the second division.”

“I think they were pretty important steps for my growth. I learned a lot because I had several coaches. But I think that the first thing you learn when you are still young is not a water polo thing, but an education in being humble and polite, knowing how to be part of a group and respect people around you.I think that if you don’t have these things, you cannot become a champion. You need to put the right effort into every session into the relationships that you have with the people around you”

Di Fulvio eventually got his big move to Pro Recco, which he describes as “every water polo player’s dream”. Despite his increasing status as an important player for the club, he never takes what he has for granted:

“Pro Recco is one of the best teams in the world, so it’s logical that the club has the best players in the world. I think that I am still lucky to be a part of this club. This is my ninth season here. I’m playing with a lot of champions: Olympic champions, World Champions, and also other players who didn’t win a lot with the national team but who are so important to us as a team. You know we work like a clock, all together.”

You could be excused for assuming that a player who has won as many trophies as Di Fulvio would have lost some of his hunger and desire to win medals. The top goal-scorer of the Italian league last season, however, takes a typically romantic view of success, and that drives him towards his biggest aim of his career, to become an olympic champion:

“The desire of winning came with the winning itself. When you win, you realise how beautiful it is to win a trophy, a cup, or something else. I can say that my biggest goal for the national team is to win the Olympic gold medal, and I know it’s very difficult to do. Every day I train in a gym and in the pool with this goal.”

Di Fulvio acknowledged that the upcoming two years would be extremely hectic. He’s right. However, when asked about his perspective as a player, he responded candidly, as one would expect from a player who is enjoying the prime of his playing career:

“Personally, I like playing every match. It’s like an hour of fun. It will be an incredible two years. I can say that I like it; there is an opportunity to win a lot of medals. Of course, it will be tough; there will be a lot of trips and a lot of games – more matches than training even. I think we can do good things in 2 years, and I tell you again that, of course, the Olympic Medal is my best goal and dream as well.”

Among other topics, Francesco discusses a summary of 2022, his time at Pro Recco, and how he prepares for each match.

In part two, Francesco answers questions that have been sent in via social media.

The Italian talks us through his Total 7, as well as talking about the best player he has ever played with, the truth about his hat number, how much coffee he drinks before a game, and what he gets up to in his free time.

Listen to our episode with Francesco now! All the episodes of the Total Waterpolo Podcast are available on all major Podcast streaming services, such as Spotify, Apple Podcasts and YouTube.

Don’t forget to head over to www.wearwaterpolo.com and use our discount code ‘PODCAST10’ for 10% off your next order!

Find all episodes of the Total Waterpolo Podcast here