PODCAST: Halligan “We have a vision to become a powerhouse in international water polo” 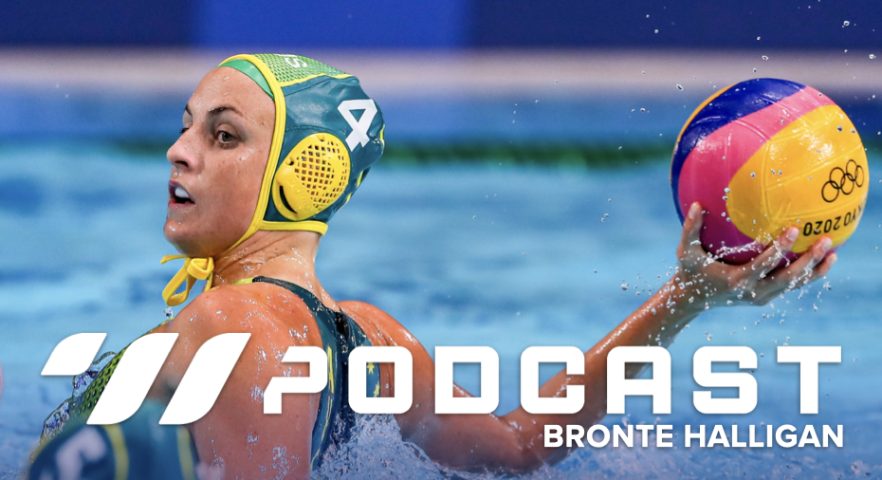 This week’s episode of the Total Waterpolo Podcast is with a leading figure of the Australia national team, Bronte Halligan.

In our latest Podcast episode, Bronte joins us from Australia’s pre-tournament training camp in Zeist, an environment she is happy to return to:

“It’s always so lovely to be back with the national team. I’ve spent a few years apart from Australia playing and training in different locations. So. It’s always so much fun to come back, and the band is just flowing and the girls are laughing. So yeah, it’s a good time when we get to rejoin and come together as a group.”

Halligan assesses the current condition of her team, as well as the United States and the Netherlands, who have all shared training sessions this week:

‘The USA and the Netherlands have quite new groups here in Zeist. It’s a weird time of the year for international polo in November. It’s not really heard of for us. They’ve got new groups, we’ve got a new group as a byproduct of a lot of people retiring last year. I think everyone’s been trying new things, seeing what works and what doesn’t work. It’s a very experimental week. It’s been high energy. In the finals next week, we will take it game by game. You never think too far ahead. We’ve got 3 round games and it’s a different setup where you don’t have a quarterfinal to fall back on, you go straight to the semi-finals.”

Despite being only twenty-six years old, Halligan is regarded as one of the senior players on a relatively young team, a responsibility she is enjoying more and more:

“I love the role I’ve taken on in this cycle. I am considered old in the Stingers now, which is mind-boggling to me because I still feel like that little 16- or 17-year old. It’s weird that I am considered old or a grandma in this, since I am only 26. Our average age is something like 23, and we’ve got eight girls born around 2000 or younger.”

Moreover, the Stinger’s number four believes that the current age-profile of the Australian national team is cause for optimism:

“That’s what’s exciting about the group: they’re all high-energy. They’re all excited to be there. It’s almost like they have a chip on their shoulder, they have something to prove, and they are hell for leather the entire time. We’re aiming to build and grow as a team and hopefully bring more girls in and grow them as well. So then this sport and this squad,  hopefully,  will get bigger and bigger and better. I think that is the vision that we will progress to be a powerhouse in international water polo”

Halligan attended the Olympics with Australia in Tokyo, fulfilling a lifelong dream, but five years earlier, she was dealt a devastating blow when she was left off the team for the Olympics:

“Rio was a really good lesson for me. I’ve never missed out on a team in my life. But I was definitely disappointed. I think I am more confused than anything, because I felt I had probably done everything I could to make it.”

But a disappointed Bronte recalls a story on the podcast about how her father, legendary Kiwi Rugby player Daryll Halligan, supported her in the aftermath of being left out of the Olympic team:

“After the phone call saying I didn’t make it to Rio, my dad took me down to the beach.  It was the middle of winter. absolutely freezing. I’m obviously hysterically crying. I am really disappointed. He made me jump in the ocean. At that first kind of initial impact of the ocean when it’s winter, it kind of knocks your breath out of you a little bit, and in that moment, instead of knocking the breath out of me, It kind of put the breath back into me and kept me. Then we sat down on the beach and dad told me a story about when he missed out on a world cup with the All Blacks that kind of changed the trajectory of his life. He then moved into rugby league, and he made a name for himself in rugby league. He taught me the lesson that sports are competitive. There’s always going to be a winner. There’s always going to be a loser, and there’s always going to be someone that gets discarded, someone that gets selected, and that’s why we love sports, because we wouldn’t like sports if everyone could win. That’s not just sport, but that’s life too, you have winners and sometimes you don’t get the job you’re going for, you miss out on something and that’s okay. It’s totally okay to fail and not get there because you’ll learn a lot more about yourself. “

One of the other topics of conversation on the podcast is Bronte’s time in the United States with UCLA. Amongst many things, Halligan describes how eye-opening the experience was from a water polo point of view:

“I think I learnt the importance of attack when I went to America. That was probably the main thing, and I learnt the importance of everyone being on the same page when it comes to tactics because they  run so well, especially in college. They run such a tight ship on plays and different things. So I learned a lot about that, and Brandon Brooks and Adam Wright, my coaches,  taught you really important lessons like doing the basics and having your skills right. And then also being on the same page when it comes to a different tactics that we’re running or a different scheduled play. Adam had written up some booklets, and that was a completely new style of water polo to me. I’d never played like that before in Australia. In Australia, It’s more like here’s what we do, but let’s go play hard.”

On an intriguing podcast, Bronte talks about playing for the Aussie Stingers at the age of 17 and how the current Australia team compares to previous teams. Halligan also discusses a number of topics including studying in the USA, playing for one of Europes top clubs, and all-round tips for improving your play.

In part 2, Halligan answers your questions that you have sent in on social media on topics including: developing Australia’s youth set-up, the reason behind her hat-number, her coach at Ekipe Orizzonte Martina Miceli and her part-time job.

Listen to our episode with Bronte now! All the episodes of the Total Waterpolo Podcast are available on all major Podcast streaming services, such as Spotify, Apple Podcasts and YouTube.
Don’t forget to head over to www.wearwaterpolo.com and use our discount code ‘PODCAST10’ for 10% off your next order!
Follow us on Facebook, Twitter and Instagram