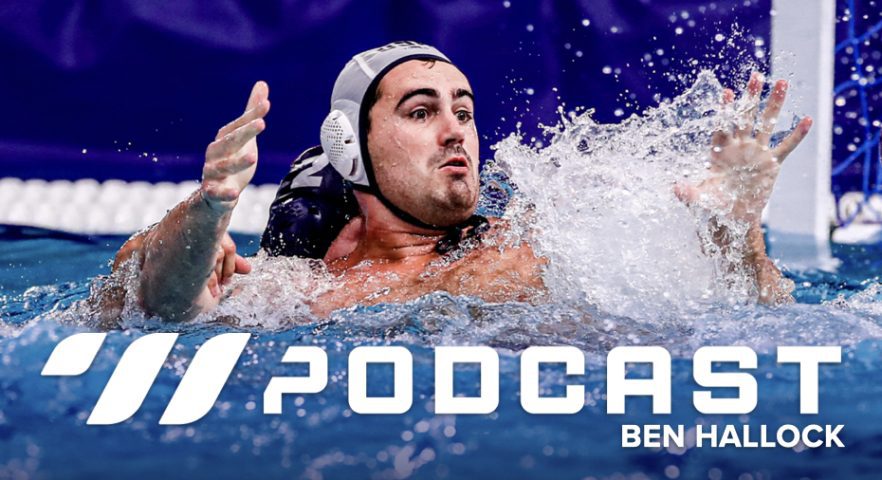 This week on the Total Waterpolo Podcast, we sat down to talk with the man considered to be the best centre forward in the world, the captain of the United States, and player of Pro Recco, Ben Hallock. Here are a few things we talked about!

On the podcast with James, Ben described the importance his time at Stanford had on his personal and sporting development:

“Playing a sport at a university pushes you to so many different limits. It’s similar to high school, but it’s a whole other level. It’s obviously the first time moving away from home, and now you’re part of a team. t’s just such an interesting time in your life and so much responsibility that you have to take on, which I think is just awesome, and it helped me grow so much as a person, especially being at a place like Stanford. I mean, the academics, the professors that I had, the people that I was just in the classroom with, was sometimes a little intimidating. It was more intimidating walking to a classroom than walking into the pool at Stanford. But it was just an incredible growth period for me; being able to practice with some incredible athletes every day and the facilities were unbelievable; probably the best facilities that I’ve known in the world that I got to use between 18 and 22 years old, I wish I still had access to them! But it’s something that you’d appreciate in the moment and something that helped me grow  tremendously as a player. “

The 25 year old centre forward then revealed his feelings before being selected for Team USA for Rio, admitting he was not expecting to make the roster:

“If you had asked me three to four months before the Olympics, I would have said no. But then, as I finished school and as the summer progressed, I would say I surprised myself a little bit, and probably some other people as well. And by the end of the World League, I believe we got second at that World League in Huizhou in China, I would say at that point, I probably expected it. But again, it was still extremely unsure; I had never really made a senior team at that point. So it was definitely a little bit of a surprise, but by the end of it, I would say I expected it myself a little bit. There was a sense of relief and also a sense of added pressure. You have just accomplished a life goal, but at the same time, you know, one of the trickiest things is making an Olympic team is accepting that you have just hit a goal of yours, but you have a bigger one in front of you.”

Hallock then shared his view on the biggest difference between the Olympic Games and other major competitions:

“You are just introduced this whole other level of intensity. I played in the World League before and I had been training with the national team against these other teams. And you just saw this new level of physicality, of energy, of attention to detail. I would say that the biggest thing is, even though you’ve played against these guys before, the level of the game, the level of their play always gets a lot higher. And that was something that was helpful going into the Tokyo games and understanding that, not to be surprised by it, you learn a lot more from when you lose than when you win. Sometimes I still pull up some of those games to watch, and I know it was six years ago and I was 18 years old, but sometimes I still pull them up to look at them to remind myself of what I did.”

An interesting moment in the Podcast was when Ben discussed the impact COVID had on his move to Pro Recco:

“I wouldn’t have been in Europe for the 20/21 season if it wasn’t for COVID. Maybe I would have been in Europe for the second half with a different team, but there is no way I would have ended up at Recco. It just didn’t look like the season, which happens in the fall in the US, it didn’t look like it was going to happen. No one knew if it was ever going to happen. I ended up getting a call from Gabi Hernandez and he was like, “Hey, what’s up, what’s the deal with school? When are you done?” And I was talking to him and I said, look, I don’t know when the season’s going to happen. Everyone’s finishing school online, that’s an option, and it eventually got to the point where I had to make a decision: if I was going to stay around at school and potentially play a year that would happen in the spring, or decide to sign with Recco and basically not play my fourth year of school, which was a very tough decision. So that was a tough decision, but without COVID, I don’t think there’s any way any of that happens. I wouldn’t have left early, no way, I would’ve stayed, played my last year.”

Having decided to join Pro Recco, Ben faced a lot of challenges, especially as an American who had never played professional water polo before:

“I would definitely say that European clubs have a European bias, naturally any time you have a non-European, whether it’s an American, Aussie, Canadian, or whatever it may be. I think it’s one thing if you’re an established player and you’ve been around a lot, but when you’re coming as a foreigner for the first time, they expect a lot. They expect foreigners to be some of the best players on the team whatever club you’re going to. A lot of the time, if you do well, it’s fantastic. If you don’t do well, sometimes it’s on your shoulders, and the next year, you’re probably onto the next team, which you’ve seen a lot with, with non-European players. I would say I did experience a stereotype a little bit when I arrived. I wouldn’t say with Recco, but you can just see it when we were playing other foreigners,  how they would talk about maybe a non-European foreigner on another team like, “Hey, we can take advantage of him, he’s not used to this water polo”.

Ben emphasized that with all the success of Pro Recco, comes great expectations:

“I would say the hardest part is also the best part if you relish; it’s the expectation. Every club goes into every year saying, “Hey, we want to win everything” but it’s truly an expectation from the rest of the water polo world of Pro Recco. Recco are like the Yankees; if they lose, then it’s a big deal. If they win it’s like, okay, maybe that was expected – which is a lot different than a lot of other teams: if they win, it’s a huge success. Obviously, for us, winning is a massive success. I’m not saying that it’s just an average year or whatever, but I would talk about the expectations from the water polo community. I would say managing those expectations and sort of relishing it, being able to enjoy it and enjoy the work, enjoying  the games even when the pressure’s on. There is probably a special trait that a lot of the players there have gotten used to, and it’s something that I’ve had to get used to. It’s something that I’ve been able to enjoy, being you being the bad guy a little bit. You can sort of relish in that.”

And of course, as the captain of the United States national team, Ben is optimistic for their prospects going forward:

“I think the most important thing is keeping this group of guys around. Potentially, Paris is probably the most important aspect of that. I think there’s still just one speed bump that we need to get over as far as winning  a crossover game in one of the Olympic or World Championship tournaments. We’ve shown that we’ve always done pretty well in the World League, funnily enough. Since I joined the national team when I was 18, I’ve gotten second place three times, fourth once, and then seventh once. And so I don’t know if that’s because Americans are good at swimming in six games in six days – maybe that’s a thing. I don’t know what it is. But I would say we do have a good group of guys, so many other good players who played really well this year. And a lot of guys who are up and coming can push around the team. Some guys are coming back from Tokyo who took a break last year. So we should have a really good team, a very competitive team, to make, and it should be a lot of fun going forward. I’m really excited about the group for sure.”

Ben also spoke about the differences between the American collegiate system and the professional leagues in Europe, as well as his experiences in Recco being coached by Sandro Sukno. You won’t want to miss Hallock views about the Paris Olympics, his Total7, his role models growing up and his hobbies outside water polo.

Listen to our episode with Ben Hallock now! All the episodes of the Total Waterpolo Podcast are available on all major Podcast streaming services, such as Spotify, Apple Podcasts and YouTube.
Don’t forget to head over to www.wearwaterpolo.com and use our discount code ‘PODCAST10’ for 10% off your next order