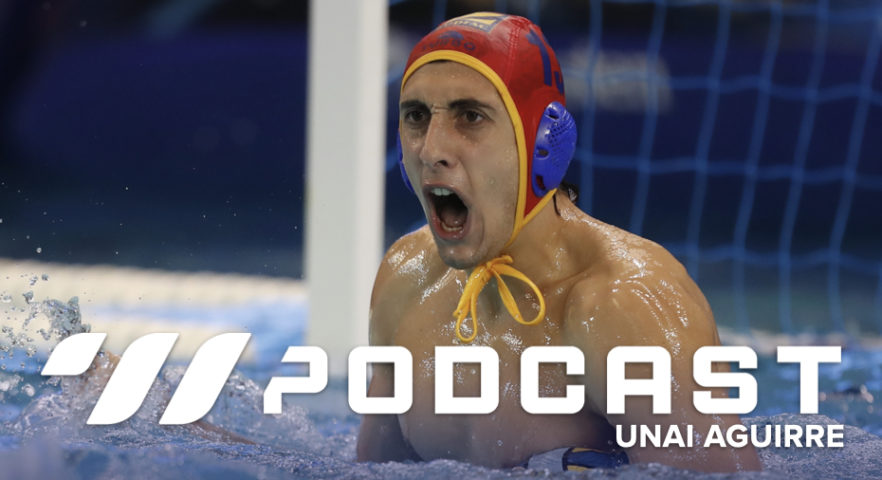 We were thrilled to have Unai Aguirre, the goalkeeper for Barceloneta and the Spanish national team, on this week’s episode of the Total Water Polo Podcast.

This week’s episode is all about goalkeeping, with Unai sharing his best insights into life between the sticks!

It was a wonderful year for the Spanish national team, as they won gold at the World Championships in Budapest, their first such title in two decades. For Unai, he believes Spain deserved the gold medal:

“An amazing tournament from the beginning, we know that we are one of of the best teams in the world for sure”

Aguirre is only twenty years old, but he is quickly becoming one of the best goalkeepers in the world. According to him, his strengths are his patience and his natural ability to react quickly:

“I’m so fast and I think that  my capacity to see the ball going is like ‘0. Something’. I work on that and I based my style on that. I’m waiting all the time for the shot you know and I’m waiting for the ball signs. If the ball is not out from the hand of the player, I’m not going to move. Some goalkeepers like to anticipate the shot they think “oh he’s going to shoot here or he’s on a shot or he’s gonna pass”. No. I’m waiting all the time. And that’s one thing that I would work a lot.”

Unai is an extremely passionate and emotional player who wears his emotions on his sleeve. During our talk, however, Barceloneta’s starting goalkeeper emphasises the importance of remaining calm and having a realistic outlook on the position:

“It’s so important I think that to mature as a goalkeeper you have to accept that you can’t stop all the goals. It’s impossible! You can’t stop everything. Once you have learned this, you’re going play much better, and enjoy the game. When you are calm in the goal it’s better for your positioning. “

Unai describes how his relationship with his teammates inspires him to make a game-saving saves:

“I think that I play with an advantage because I have played with those guys for four years. And I was with them on the bench I was with in the world. So I know them very well. There is also one point that is very important and they are all my friends. When you see some of your friends committing a foul, in my brain it’s like ‘okay I have to save him because he’s my friend’. You know I have to take his back and sometimes they do the same for me. When it is your friend, you don’t want to see your friends failing”

And Unai responds to a common comparison between himself and the late, great Jesus Rollan:

“ I think every player, every person has his own way to get on the top and I think. But I I said that too many times and I’m Unai Aguirre, I’m not Jesus Rollan. I’m not going to be the next Jesus Rollan, I’m gonna be the next Unai Aguirre. He’s amazing. But I think the most important thing you have to think for yourself is what you know for yourself. Not try to compare with other guys because it doesn’t make sense”

On the podcast, we cover a number of other topics, including Unai’s development as a goalkeeper at CAR, why he watches videos of his matches seven times over, the hardest shot for a keeper to save, as well as some amazing advice for improving a goalkeeper’s skills and mindset.

In part 2, Unai answers your questions that you have sent in on social media .

Listen to our episode with Bronte now! All the episodes of the Total Waterpolo Podcast are available on all major Podcast streaming services, such as Spotify, Apple Podcasts and YouTube.
Don’t forget to head over to www.wearwaterpolo.com and use our discount code ‘PODCAST10’ for 10% off your next order!
Follow us on Facebook, Twitter and Instagram