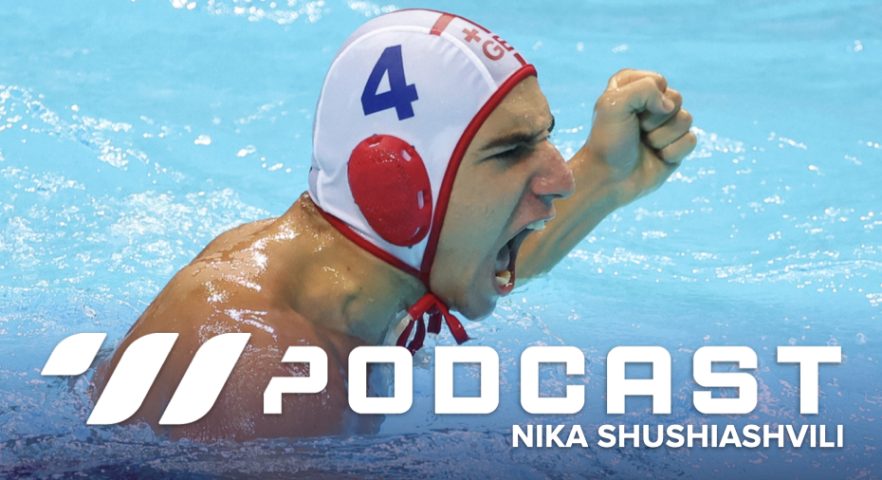 On this week’s episode of the Total Waterpolo Podcast, we were joined by Nika Shushiashvili, one of Georgia’s best homegrown players.

Before his big move to Novi Beograd, Nika spent half a season with Sabac in Serbia and Spandau Berlin. In our most recent episode, the Georgian fondly recalls his initial spell in Serbia:

“It was an amazing experience. It was my first international team, and another player from Georgia went to play there. I had a fully committed season for the first time in my life. We were in the second division of the Adriatic League, but we got promoted into the first league. It was a big success for the club. And so I would not be lying to say that we were the first initial group of people back then to achieve lots of good results with it, and it helped. They have pushed the level and they are still adding on to our success now.”

Nika admitted, however, that he was dissatisfied with the manner in which his time with Spandau ended in Germany.

“Unfortunately, it didn’t go as planned. I had some problems with my visa and I was still looked at as a Georgian guy, a young guy who might be a player for the future, but is still not helping at a certain level to be in the Champions League squad. So I went back to Georgia. Fortunately, Dinamo started its own campaign and I was part of it. They gave me the amazing opportunity to compete at the highest level in the Champions League.”

The 23-year-old then describes his emotions upon being unexpectedly recruited by Novi Beograd:

“Novi Beograd called out of nowhere. It appears to be Petra Kovacevic, my coach in Spandau, who recommended me, saying that I was a good young left-handed player who could help the team, and for me, it was an amazing offer. I could never imagine going over to Belgrade.”

During our podcast, Nika describes how, as soon as he and his wife moved to Belgrade, he was made to feel like a member of a family community:

“But I can only speak highly of them. I felt at home immediately, and I felt like they knew a lot about the sport, and they accepted me as their own and taught me a lot. I was listening to them. I’m still listening to them. I’m trying to improve on some things, and I think this process was a beautiful thing that took a lot of pressure off me, even as a foreigner.”

While Nika is extremely complimentary of all of his coaches throughout his career, he admits that Igor Milanovic was particularly memorable:

“It was only three months, but I think it’s not only my words that we can say that he made an impact, and even now we are remembering him as a great coach and as a great character. He has this energy. Wherever we go, you can’t help but notice that he is there, and you know he is in the room with his aura with him. It’s a great thing for a coach also that you feel the power, feel the support. He turned around a very hard season. We had many ups and downs and were hoping for smooth sailing until the end. I loved the time that I spent with him.”

Despite the fact that Novi Beograd’s summer preparation hasn’t been ideal, Nika is optimistic about the team’s prospects for the upcoming season:

“I think we didn’t have a lot of time to prepare for the season because of having this world championship and European championship back to back. It was not a long preseason. I think we had ten days that we used to the maximum, but we’re going step by step. We’re not thinking about the Champions League final eight or any specific game in the Champions League. We also have tough games in the Regional League and in the domestic championship for now, and we’re focusing on them.  I think we will get our priorities straight and we will set the goals that we need to achieve. But for now, we are just looking forward to our next game, and the hope is high. We believe in ourselves. I think we are an even better team than last season and, we showed that in the games that we played up until now. But the real test will be the serious games that are coming.”

Nika also discusses his upbringing in Georgia, the development of the Georgian national team, as well as some of his habits as a professional player, his hobbies outside the sport and some of his most memorable moments in his career so far. In part two, Nika answers the questions you have sent in via social media.

Listen to our episode with Nika Shushiashvili now! All the episodes of the Total Waterpolo Podcast are available on all major Podcast streaming services, such as Spotify, Apple Podcasts and YouTube.
Don’t forget to head over to www.wearwaterpolo.com and use our discount code ‘PODCAST10’ for 10% off your next order