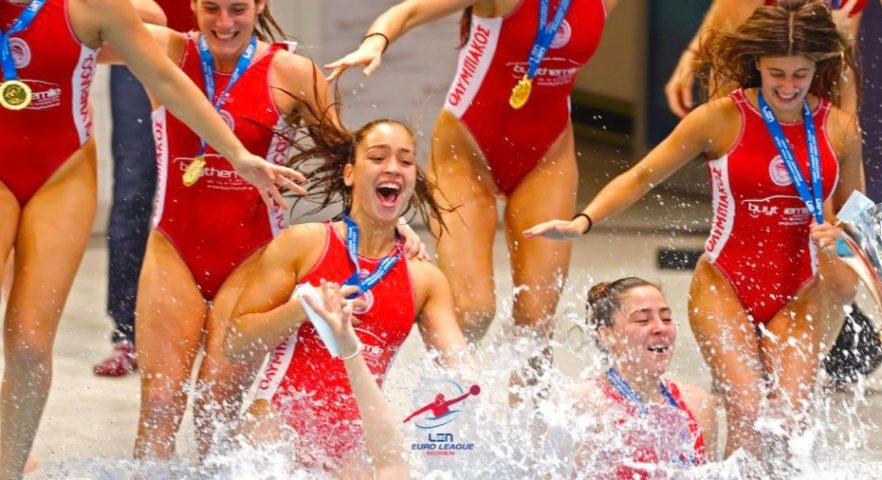 This season, 24 of Europe’s very best will fight to be crowned European Champions, however, 22 will have to first pass the qualification stages – which take place this week (18th November-21st November). The champions from last year, Olympiacos, are granted a by into the next round, as are the runners up, Dunaujvaros, and third-place finishers, UVSE. Kinef Kirishi also gain a automatic place in the next round, having won the LEN Trophy from last season.

The qualification round this week takes place across four of Europe’s top cities – Athens, Rome, Berlin and Porto. There are five teams in Groups A and D, and six teams in Groups B and C.

All the teams will play each other in a round-robin format. The fixture schedule is at the bottom of the article. The three top teams from each group will progress to the next round, meaning 12 spots are available from the qualification round. Adding in the four teams who join in the next round, there will be a total of 16.

A word on the competition…

There is no getting away from the fact this season’s competition is going to be an absolute belter. The standard of the women’s game is ever increasing and the professional club system in Europe is playing a big part in making the women’s game bigger. With 24 teams from 12 different nations, the diversity of clubs and styles participating in this year’s rendition will certainly make for a very entertaining spectacle.

While there is a lot to be excited about for this competition, there are still significant shortcomings that has created a headache for clubs, coaches and players. Principally, you will notice that most teams will be expected to play two games on the same day, which does nothing for the athletes, their performance and their recovery. Due to the compact nature of fixture scheduling, a great deal is being expected of the players physically and mentally. This is not ideal for one of the world’s top club competitions.

Who will be in contention for the title?

It is the question that everyone is asking… who will finish as Europe’s best club this season? Of course there is no crystal ball for us to look into, so we will do our best to analyse who we think is in best shape for a title challenge.

We first start with last year’s champions, Olympiacos. Despite a close 7-6 victory over Dunaujvaros in last season, nobody can argue that Olympiacos were well worth the trophy last year. Charis Pavlidis’s side have seriously strengthened over the summer transfer window, which has really shown in the start to the season they have made. Summer acquisitions include Kyra Christmas, Brigitte Sleeking and Elena Xenaki. On top of their existing stars, including the three Plevritou sisters and Nikoleta Eleftheriadou, Olympiacos look really good for a title challenge. We will see them join the tournament in the next round.

Another one of the teams that will join the party late include Dunaujvaros. They are currently unbeaten in the OB I and their Hungarian superstars, Greta Gurisatti and Dorottya Szilagyi, are in really fine form. Attila Mihok’s side are one of Europe’s hottest sides who can beat anyone on their day, and will definitely aim to go one better than last season.

The second Hungarian side who have earned a by into the next round is UVSE. The Hungarians, who hail from Budapest have been in excellent domestic form so far this season. With the quality of Rita Keszthelyi-Nagy, Natasa Rybanska, Dora Abel-Antal and Alda Magyari in between the sticks, Marton Benczur’s side are definitely in contention to be Europe’s top side. For all of UVSE’s trophies, they have never before lifted the Euro League – something they’ll definitely want to correct this season.

The fourth side to automatically progress to the next round is KINEF-Kirishi, who lifted the LEN Trophy last season. The Russians are unbeaten in their domestic league so far and posses some of Russia’s finest players, including none other than Ekaterina Prokofyeva. They have some key absences for the time being with Anastasia Simanovich being pregnant and Krimer Kseniia being injured, but the supporting cast include Daria Soboleva and Evgenia Ivanova. Anna Karnaukh got married on Saturday so is a doubt for this week. Kinef will be looking to add to their 2 previous European titles (2017 & 2018).

Who can win from the Qualification pool?

The four teams who join the competition in the next round are all well placed to challenge for the Euro League, but they aren’t the only teams in contention for the title. There are a number of teams who have the quality to become Europe’s top club.

Sabadell will certainly have their sights on European glory and possess some of the world’s top players. First of all, they have the talent of the all-time Olympic goal-scorer, Maggie Steffens, but they also have the squad depth of Sabrina Van der Sloot, Maartje Keuning, Maica Garcia Godoy, Judith Forca Ariza, Brigitta Games, Monika Eggens, Mati Ortiz and Laura Ester in goal. Its arguably the best team in the competition.

Mataro, however, have been sharp since day one of this season and will provide a serious challenge for any club. With the talents of Simone Van de Kraats, Vivian Sevenich, Anna Timofeeva and Anna Espar, their star-studded, potent attacking side is a fear for any defence.

Away from Spain, Greece are very well represented with four teams in the competition this season. Away from Olympiacos, one side from Greece that could go far in the Euro League is Ethnikos. Ethnikos have a really well-put together side with the world’s best goalkeeper, Ashleigh Johnson, as well as Steph Haralabidis, her younger sister, Ioanna, and one of the worlds best centre-forwards, the Hungarian Rebecca Parkes.

Russian side, Dynamo Uralochka, also have a great depth of young Russian talent. Currently third in the Russian league, Uralochka, have the likes of Aleksandra Bogdanova, Yulia Lapteva, Daria Bunakova, Maria Bersneva and the goalkeeper Evgeniia Golovina. While the quality perhaps is not that of some other European clubs, the organisation and energy can certainly win games for Michael Nakoryakov’s side. Another factor that may give viewers a bit of context for how good this Uralochka side is, is that they recently defeated KINEF-Kirishi in the Russian Cup final.

Who make up the rest of the competition?

We have already mentioned two Spanish and two Hungarian teams who could win the title, but in truth there are two others from each nation who will compete very well against anyone.

From Spain, we have CE Mediterrani and CN Terrassa. Mediterrani are certainly not too far off the pace of the best in Europe with a great squad including Paula Crespi, Clara Espar, Debby Willemsz, Iris Wolves and Alba Munoz. Terrassa may be slightly further behind the other Spanish sides, but with Bea Ortiz, Paula Leiton, Nina Ten Broek and Pili Pena, it will be interesting to see where they finish.

From Hungary, we have two more clubs from Budapest – FTC-Telekom Budapest and BVSC. Ferencvaros are third in the Hungarian league and have been playing with confidence so far this season. Their squad includes Anna Illes, Panna Petik and Vanda Valyi. BVSC, as usual, are always difficult to beat. They can really hurt teams with Aniko Gyongyossi, Dora Leimeter and Alexa Gemes leading the side to a good start in the OB I.

Greece also have two teams that will be hoping to get out of the qualifiers. The two nautical clubs, Glyfada and Vouliagmeni, will have their work cut out if they are to progress. Glyfada’s squad include Hungarian keeper, Edina Gangl, as well as the young stars, Ilse Koolhaas and Eirini Ninou. Vouliagmeni have a decent team, which has been added to with the recent signings from abroad of the Australian, Amy Ridge, and the Russian, Ekaterina Tankeeva.

In recent years, the Italian national team have been in a period of transition, however four clubs from Italy will participate in this season’s Euro League. The current leaders of the Italian league are Plebiscito Padova, however SIS Roma and CSS Verona are hot on their heels. The most successful women’s team in the history of the Euro League are Ekipe Orizzonte – who have won a record 8 titles. However, their glory days are behind them at present, but do not be mistaken to think any of these four teams will be weak. Players to watch out for are CSS Vernona’s Roberta Biaconi, Ekipe Orizzonte’s Valeria Palmieri, Chiara Ranalli of SIS Roma and Padova’s Russian International, Mariia Borisova.

France have two teams participating this season – Lille UC and Olympic Nice. Both have young but very exciting players – many of whom played big parts in the success of the French teams at the U17 Euros in Sibenik, as well as the U21 World Championships in Israel. Lille have the talents of Juliette D’halluin and Effrosyni Katsimpri to call upon, while Nice can turn to France’s young teenage superstar, Ema Vernoux.

Of the rest, we have ZVL 1886 Tetteroo, ASA Tel Aviv, Spandau 04 Berlin, SK Olympia Kosice, CA Pacense and Sirens Malta all hoping to make history in the competition. Spandau are top of the German league and could cause a shock, while ASA Tel Aviv will be an interesting watch with the talents of young Alma Yaacobi, Ronny Gazit and the two Lichtenstein sisters. ZVL have been very disappointing so far in the Dutch league and are currently fourth. CA Pacense recently lost the Portuguese Super Cup final to rivals Benfica.