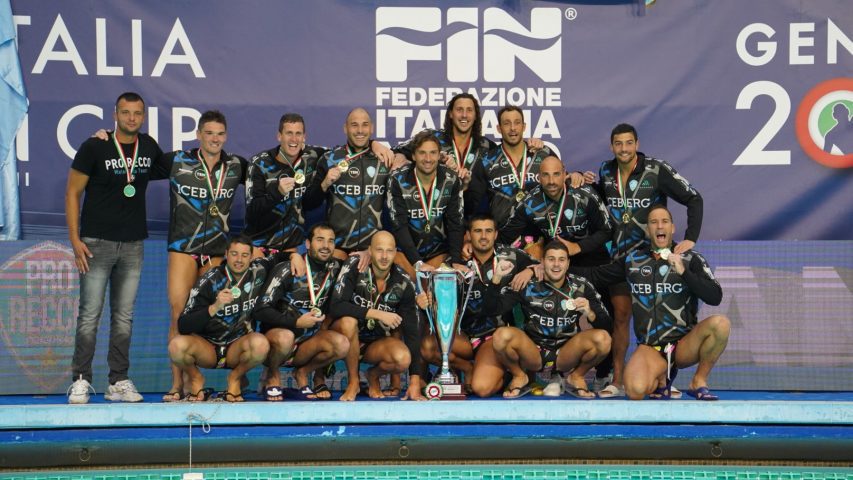 Pro Recco won its 16th Italian Cup, beating its arch-rival Brescia in the final of the 30th edition of the competition.

The European champion defeated the Italian champion narrowly (8:7) in the final in Genoa. It claimed its 9th Italian Cup in a row.

Pro Recco and Brescia have been regular participants of the final match since 2014, and almost each of the gold medal matches was very exciting. Last year, Pro Recco edged out Brescia 11:10 in the final in Palermo.

The finalists started very carefully in defense in the opening minutes. Aaron Younger scored the first goal in the match in the fourth minute. Two minutes later, Djordje Lazic equalized.

In the third period, Recco stretched the margin to three (Younger and Zalanki) -6:3. Gergo Zalanki opened the fourth quarter by converting a penalty shot and Recco jumped to 7:3.

But Brescia didn’t say its last word. The Italian champion produced a 3:0 run in less than two minutes (Vincenzo Dolce scored two, Nicholas Prescutti one goal). It reduced the gap to 6:7 with 04:16 minutes remaining on the clock. But shortly after, Zalanki doubled Recco’s advantage – 8:6. In the next Brescia’s possession, Aleksandar Ivovic committed a penalty foul. The European champion lost its captain (that was his third personal foul), but goalkeeper Marco Del Lungo raised Recco’s self-confidence. He blocked Dolce’s shot from the 5m line. Djordje Lazic made it 7:8 with 90 seconds to go, but it turned out that was the last goal in the match. Brescia had a man-up in its last possession, but it didn’t finish the attack – it lost the ball. Recco kept the minimal advantage in the remaining time.

Recco scored five goals with a man-up advantage (5/14), one from a penalty and two from 6 on 6 attacks. Brescia netted only one action goal and six in extra-man attacks (6/16).

The Italian Cup is the second trophy in the season for the team coached by 2017 Total Player Sandro Sukno. In December, Pro Recco won the LEN Super Cup.

Savona was almost always in front Telimar in the bronze-medal match. Savona opened the match with two goals. Telimar leveled at 2:2. In the next three quarters, Savona built a 3-goal lead three times (5:2, 7:4, 10:7). Telimar scored the last two goals in the match. Occhione made it 9:10 in the 31st minute, but the Sicilians didn’t go further.