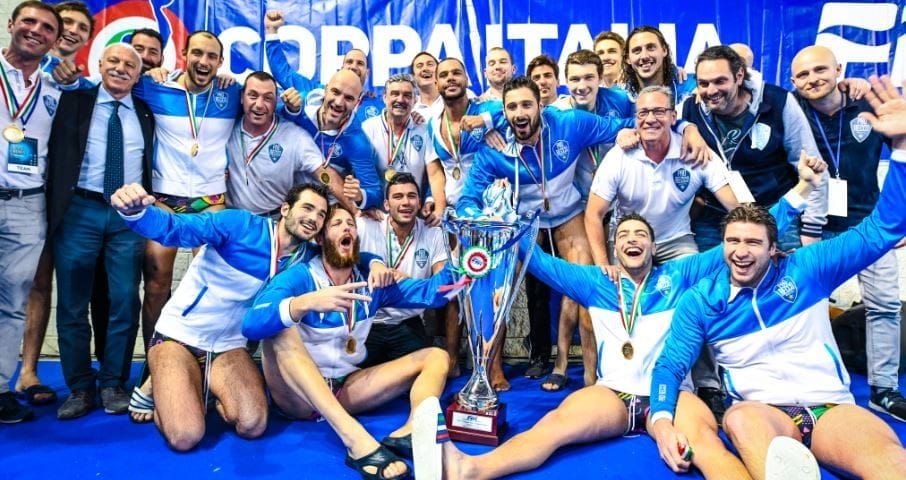 Ratko Rudić’s team raised the cup after yesterday’s win against Brescia. The finale saw a strong game from Pro Recco’s side, which awarded the team with the Italian Cup trophy.

It took Pro Recco less than 100 seconds to take the lead. And from the moment they controlled the score, they controlled the game. Brescia struggled to keep up, but there was little they could do against Recco’s fortified defenses, and Di Fulvio’s and Ivović’s three goals.

14th Trophy in the Italian Cup

“We played one of the best games of the season,” said Ratko Rudić, “we showed maturity and organization in all phases of the game. I am very happy with the defense above all because we have stopped their every opportunity of creating easy attacks and exploit our defense. I’m proud even though we could have done better in the attack. For us, this is a good indication for the future. I’m very happy, every victory is beautiful.”

“This is the first trophy I’m raising as a captain,” said captain Ivović. “It’s a great privilege for me to be able to be part of this group and this great club. Our work has been rewarded and we hope to continue like this in the Champions League. Today we had an extraordinary game, perhaps one of the best since I played in Pro Recco: we were flawless.”

“The best Pro Recco of the season,” added Di Fulvio. “We gave our hearts and we deserved the win. It was a perfect match.”