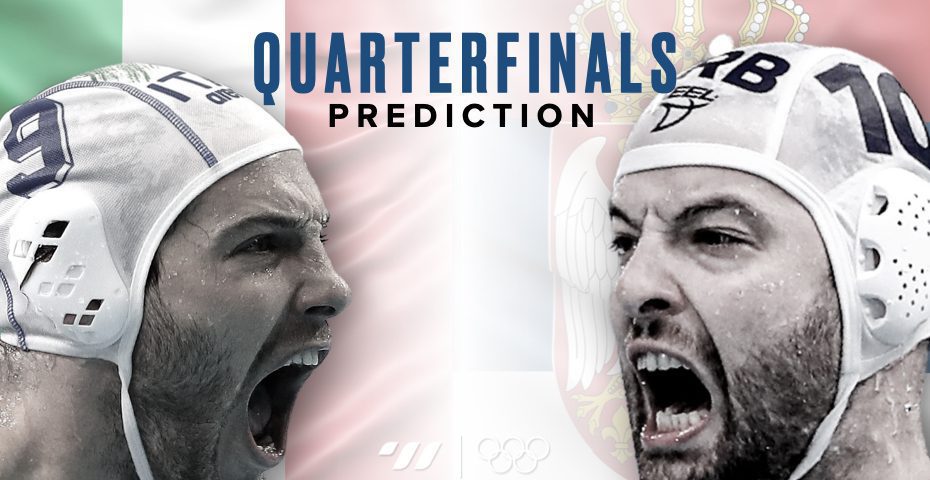 Arguably the most balanced Olympic tournament is coming to its final phase. It’s hard to predict who will win it, even though Spain has a perfect 5-0-0 so far and looks rather impressive. However, the tournament is just starting, while anything can happen in a single match.

One of the most important things in a single-match contest is refereeing, as we’ve seen plenty of inconsistency throughout the last two years. Now, with the new rules, no one is sure when there’s a penalty, while an extra man situation can happen 30+ times per match. It’s quite unclear why there’s lack of refs from Croatia, Serbia, Italy, etc. Even one of the best, Boris Margeta, was left out, while at the same time we see some decision being made which are, simply, ruining this sport as people in front of the TV just don’t understand them.

But back to the matches. 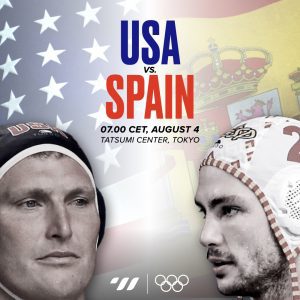 The match with a clear favourite position, as USA is a +3,5 goals underdog. Once again, they came with quite a young team, even though they have players playing in the biggest clubs in Europe. Hallock (Pro Recco) is one of the best centres in the world, or even the best according to his coach, Dejan Udovicic, while his partner Alex Obert is playing much better in this tournament, than he did the whole season in Jug. Plenty of fire power from the outside where (especially) Bowen, Cupido and Daube can make a lot of damage. Their main problem is inconsistency, as they’ve shown throughout the tournament they can compete with strong teams for 3 quarters of the match, but not until the FT.  Lack of a proper left-handed player.

Spain has played some great tournaments in recent years but missed out on gold. They’ve adjusted to new rules much better than anyone else, as they prefer a lot of swimming, while at the same time their centres De Toro and Tahull playing rather well. Granados is the best scorer of the tournament and is continuing to evolve his play as he was projected to be one of the world’s best. I also must mention Sanahuja, who was ‘Granados’ of his generation as has shined here. Munarriz is a world-class, while in Perrone they have a playmaker who will change the course of the match when needed. Pinedo on goal is making the difference, while we’ve also seen he will have a decent heir in Unai Aguirre. Maybe even better to say that Aguirre reminded us of a late Jesus Rollan with his gestures after each save. These are all individuals, but Spain is playing as a team, as most of the players are together the whole season in Barceloneta. They really can go far, especially if their (M) zone defence will continue to create issues for teams such as Serbia and Croatia, which are more oriented to static play.

Clear outcome of this match would be Spain to advance, but if USA manages to extend their good play from 2-3 quarters to a full match, we might see some surprise. Udovicic has rested the team in last match and has surely prepared them for what’s going to happen. Main thing will be to be extra precise with an extra man situation, as well as not to allow Pinedo to get easy saves. In defence they will probably try to neutralise Munarriz and keep him away from goal, but not sure they can do it full match. Granados and Sanahuja will have plenty of chances to score, as Holland wasn’t so successful vs top opposing players so far. Might even be the right match for Mallarach to showcase he’s still here. Our pick would be Spain to advance with a 1-3 goals difference win. Depends on the refereeing pair, we’d probably opt for over 7,5 team goals for USA, or over 17,5 combined. We’re aware of Spanish defence, but plenty of fire power on both ends, whit (expected) plenty of extra man situations. 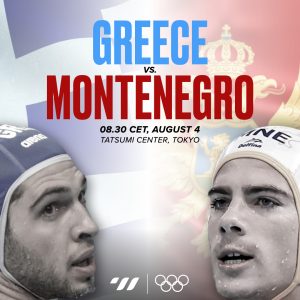 Greece finished the group in the first place, with 4 wins and only one draw against Italy. Again, as last couple of years, they’ve shown a lot, with some world-class players in Fountulis, Genidounas and Vlacholopoulos. This time, their goalkeeper came to tournament, as that wasn’t the case always. Zerdevas was, arguably, the best GK of 1st phase of the tournament. Same as Spain, Greece also has some youngsters that are shining on an international scene (Papanastasiou, Giokuvetsis), but unlike Spain, they do lack consistency. In one match they can beat anyone, but also lose to anyone. Their center pair is well known for years with Mourikis and Kolomvos, but somehow, I tend to believe it would be even better if Kakaris was here instead of Kolomvos.

Montenegro intentionally lost the last match to Serbia, as they’ve seen Greece like an ideal opponent for them. We can’t say we blame them, even though sport is about something else, but then again – everyone’s here for a medal, especially Montenegro which lost some ‘already won’ matches in the past. In Montenegro everything starts and end with Ivovic who is more than 50% of this team, either with scoring, defending, or pushing team beyond limits. They’re missing Lazovic on goal, but Tesanovic proved to be solid here. Ukropina, as a only left-handed player is playing rather good, finally living up to his talent. It’s a pity there’s no Djuro Radovic here, as that would open some more possibilities for them. Perkovic on center position is very young, but also talented and with plenty of experience so far. However, their main strength is that everyone knows what they’re doing, and that a team play is on a high level. They can beat anyone on a given day.

These two teams met 4 times this year, and Montenegro winning all four of those meetings. Two wins in World League, and two on Olympic qualification, where they’ve beat Greece in both finals. Tomorrow is going to be a bit different match, as stake is much higher, but Montenegro has shown they know how to play with Greece. However, pick and choosing opponents is something that can backfire now and then. It should be a close contest, so I go for a draw here. Iwill, probably, also take under 18,5 goals, but I want to see the refs pair before deciding so. Twice this year it was 12 goals, and twice 19. 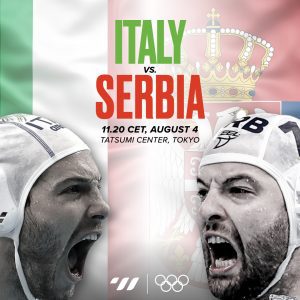 Olympic Champion against the World Champion, which says enough about this encounter. Both teams know each other very well, as main players have been on the scene for quite some time now. Neither Italy nor Serbia (apart Jakisic) have introduced some new player in recent years, even though the main players are world class.

In Serbia everything starts with Prlainovic on the left and Filipovic and Mandic on the right. If they get in the match as expected, with some goals scored, then their confidence goes sky high. They’re very strong in defense, especially centre backs, as they have 3-4 players in rotation, while all of them, beside Randjelovic to a certain extent, are quite dangerous in attack as well. They haven’t changed much, only Rasovic replaced Cuk and Lazic came instead of Vico. Strenght is pretty like 2020 when they beat Italy for 5th in EC.

Italy with the same style under Campagna from day one – pressing on the verge of exclusion across the pool, hooping that refs won’t sanction too much. Di Fulvio, on the left,  is the main standout in a team, as he can do what ever he wants, same as Figlioli on the right. Them two combined didn’t have play at the highest level together on this tournament yet, so maybe tomorrow is the chance. I was expecting more from Chalo Echenique as he’s the only left hander in the team, but he’s been quite reserved s far. They rotate quite a bit on center back position, while in center they have two very strong individuals, Bodegas and Aicardi, but both didn’t show much so far. They came back against Greece with winning 4-0 the last quarter (down 2-6) and against Hungary despite being -2 the whole match. Those two matches showed plenty of impotency in attack, as they couldn’t score in 6on6. They depend too much on individual quality of Di Fulvio and what referees will do on a given day. Del Lungo as a goalkeeper has been very solid so far, and due to

If Italy could have chosen, they would, most definitely avoid Serbia, even though they had some fine moments against them in last decade. However, Serbia has great individual quality where Mandic and Prlainovic can create chances for themselves even when the team is not playing that well. Both teams didn’t show much so far, so it might be another great battle, where we’re closer to choosing Serbia to advance. Italy will need to be (more than) good in defence, especially with Serbian extra man, as at the same time they will need to close the posts, while knowing how much damage can Filipovic, Mandic and Prlainovic do – all of them made significant portions of their trophies in Pro Recco. Again, same as in the match Greece-Montenegro, we’ll take some money on a draw. 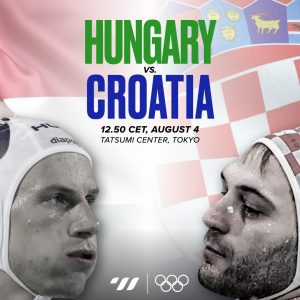 Both teams with plenty of ups and downs during this tournament, but if I have to underline, then Croatia has shown a bit more probably, despite the loses vs Spain and Australia.

Marcz as a Hungary coach decided to take a very experienced team here, bringing Hosnyanszky instead of young Vigvari. So far, it’s not clear this has been a good move. Hungary lacks attacking options, as, if we take our Varga who is half of the team, Vamos and Zalanki have been out of form. Manhercz is shooting rather poorly against stronger opponents, while Harai, and, especially Mezei have done nothing in center position.

Croatia played some extraordinary matches agains Montenegro and Serbia, and some poor ones against Australia and Spain. Australia was probably just a bad day, while Tucak was resting players for quarters, without making even giving any chance to win the match. The team is almost the same as in last competitions, with a return of Obradovic who made a huge difference in his last match vs Serbia. He has some issues with his ribs, so he missed the match vs Spain. Ever since Sukno retired, Croatia has been struggling with the outside shooting, especially if Jokovic is marked from the opposing team. Fatovic on the left has his ups and downs, same as Bukic, while Milos and Garcia haven’t shown that they’re a constant threat from the right. Both centers, Vrlic and Loncar, do play rather good, but that’s not exploited so far, especially when there’s much more movement than static play – or better to say, Croatia has problems with teams like Spain who chose to play ‘M Zone’. Bijac on goal has been sensational so far, and that’s the main reason for optimism.

I don’t expect a fast pace of the match, as both teams will play a ‘chess game’. Croatia is much stronger in center position, where Hungary centre backs just can’t cope with Vrlic and Loncar. At the same time, Mezei and Harai shouldn’t pose that much of a threat if referees won’t have an odd criterion. Main thing for Croatia is to close down Varga, and not to allow Vamos to have his day. Zalanki hasn’t shown so much so far, not just in scoring sense, but also in creating the opportunities. With the emphasise on defence, and strong Bijac on goal, I expect Hungary not to score more than 10 goals, so under 10,5 is our choice. Also, a double chance on Croatia, or +0,5 is something I would recommend.