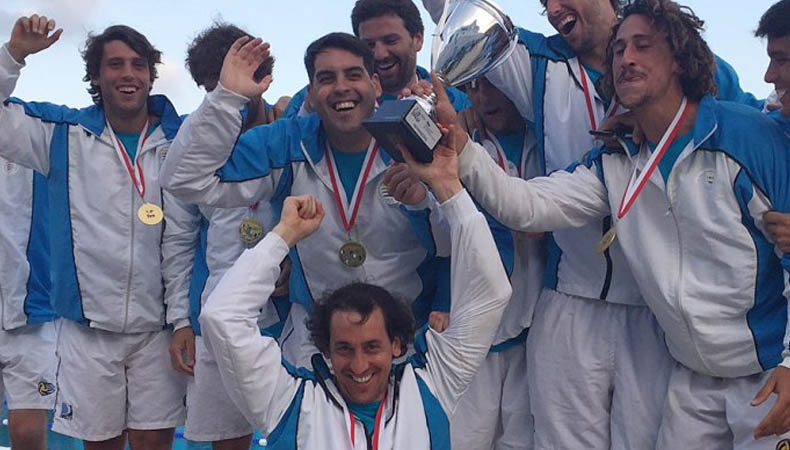 When the coach of Uruguay was tossed to the pool by his players, no one would have guessed that this actually happened to the trophy-winning team’s boss. That time, at the end of the bronze medal match, it was just a great sign of the special value of this tournament. Because it has a special value for those teams who take part.

That was also brilliantly highlighted by the triumphing yells of the Peruvian players while walking in the corridor of the locker-rooms – they had clinched the 7th place in a thriller against Singapore. Or by the height of the jumps of the Austrians at their bench at the very moment when their fifth shooter buried the decisive penalty in the shootout against Tunisia which earned them the 5th place (as it turned out to be a win earning them the bronze medal). Or by the joy of the Uruguayans who simply threw their coach to the pool – usually, it happens after the finals of water polo tournaments, here the feeling of claiming the bronze medal sent them to the seventh heaven, and their coach to the water.

However, it turned out later that this had happened to the coach of the team finally being awarded the gold medal.

It was all about tensions which erupted towards the end of the final between Malta and Iran. Malta led 8-6, the last goal came 44 seconds from time and decided the outcome… Eleven seconds later players started provocating each other – who told what, who began the whole… that part of the story might never be recovered in full. Red cards were shown for two Maltese and five Iranian players but those who had been excluded earlier began a mainly verbal fight outside the pool. While the coaches tried to order their players to refrain from making further insults on each other, witnessing the dry-land happenings first the complete Iranian team left the pool and rushed towards the scene then the Maltese players also came out from the water to defend their mates. There were no punches or serious physical violence, the participants just yelled at each other amidst some pushing. Anyway, that should not be part of any water polo games which are supposed to be decided in the pool and not out of it.

The referees had to cancel the match 33 seconds from time and the FINA Technical Water Polo Committee’s Commission couldn’t do anything else than applying the relevant rule which sanctions disciplinary matters in case more than three members of a team commit serious misconduct during a game. (See the decision in the match report.) That meant that both finalists had been disqualified and Uruguay was awarded the trophy.

In fact, they clinched the gold with ease – as the bronze medal game was the only one-sided encounter of the last session. Uruguay took a commanding lead in the first period and they managed to maintain this 3-4 goals margin until the middle of the last period: there the Saudis had one last surge but after 5-7 the Latin Americans scored a demoralizing goal which was followed by three more to secure the bronze medal for them.

The matches for the lower placements produced some extra excitements as both ended in a penalty shootout. Austria and Tunisia were entangled into battle being full with ups and downs. The last period saw some great twists, the Austrians went 6-8 ahead, the Africans replied with three connecting hits, then a lucky goal helped the European side to go even once more. The last minute saw a goal apiece, the Austrians equalized 28 seconds from time, then their goalie came up with three saves in the shootout.

Peru managed to come back from 2-5 down in the second period and from 6-8 down in the fourth against Singapore to force the shootout. They shut out the Asians in the entire last quarter while netting two goals – here one save was enough to make the difference and it came from the Peruvian keeper.

Though to finish this story in the spirit of sport, we have to add that after an hour or so, the Iranian players reappeared the scene, walked to the Maltese players and shook hands with them – both teams seemed to close down this unnecessary chapter in the only way acceptable. Too bad that peace came far later then it should have.

The final rankings of the FINA World Men’s Water Polo Development Trophy are as follows:

Malta and Iran have been disqualified.

World Championships will be held in 2022