Roma, Plebiscito and Ekipe all win ahead of exciting Champions League battles 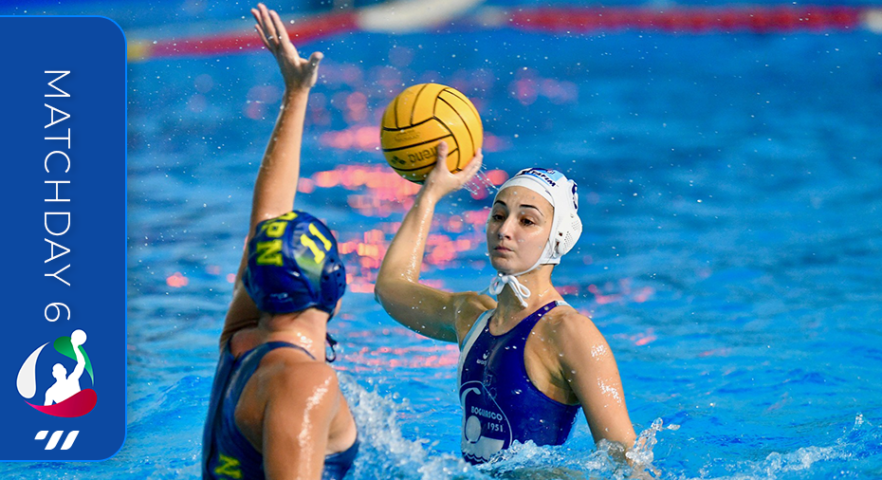 There were no surprises in the sixth matchday of the Women’s Italian A1, with all four top teams picking up three points.

Ekipe defeated Como by ten scores (18-8), while Plebiscito bettered Bologna by eleven scores (15-4). The match will take place in Padova during next weekend’s Champions League action.

SIS Roma stay top of the league by demolishing Brizz 22-3 in Catania. Trieste and Rapallo continue their winning streaks, with both teams picking up points away from home; Trieste outscored Florentia 8-4, while Rapallo edged out Bogliasco 11-8.

While Brizz enjoyed their first win of the season last weekend, their hopes of a second will be put on hold, after a crushing defeat by the visiting SIS Roma, who defeated them 22-3.

Roma have been in truly scintillating form in front of goal this season, scoring 108 goals in their opening six games – more than any other team in the league. They will host Olympiacos, De Zaan and Vouliagmeni in Ostia next weekend in a bid to progress to the quarter-finals of the Champions League.

Another excellent performance from Plebiscito Padova guided them to another three points, with a 15-4 victory over Bologna.

These two sides don’t necessarily have a huge rivalry, but Plebiscito coach, Stefano Posterivo, will have enjoyed defeating a team coached by his cousin, Andrea Posterivo.

Padova and Roma are the only teams with a perfect record in the league thus far this season.

Ekipe Orizzonte got back to winning ways after a damaging defeat to Plebiscito Padova last weekend, by defeating Como by ten scores (18-8).

Martina Miceli’s side controlled the game practically from the start of the match, and shook off Como’s best-efforts into the second half.

It was their U19 Italian International, Aurora Longo, who impressed most on the goal-scoring front, firing home six times in the match (four in the fourth quarter). Senior Setterosa, Dafne Bettini, made four scores in the game.

Despite losing to title rivals last weekend in the league, the reigning Italian champions will have their chance for revenge next weekend, as they have been drawn in the same Champions League group as Padova (as well as Dunaujvaros (HUN) and ZVL 1886 (NED)).

Rapallo have their third victory of the season, and their second in as many games, after a solid 11-8 away victory at Bogliasco.

Roberta Bianconi, a club legend who returned to the team over the summer, scored four goals for Luca Antonucci’s squad in the tight contest between the two Ligurian teams. With 17 goals this season, Bianconi, who is experiencing something of a renaissance, is second on the list of goal scorers.

Both teams performed admirably in their extra-player situations, but the visitors scored the decisive goals in the final frame to secure the victory.

The victory places the newly-promoted team in fifth place in the league, three points ahead of today’s opponents.

Trieste is staking a serious claim in being ‘the best of the rest’ in the Italian A1, with a hard-fought 8-4 victory over Florentia.

Paolo Zizza’s side lost their opening two games this campaign, but have since won four games in a row. Without any European competitions to focus on, they will enjoy a lighter schedule in the build-up to the new year, with their last game of 2022 being against Como next weekend.

Florentia have so far only accumulated three points, but have played all of the top four teams so far this season, so Aleksandra Cotti will not be too concerned at this stage.