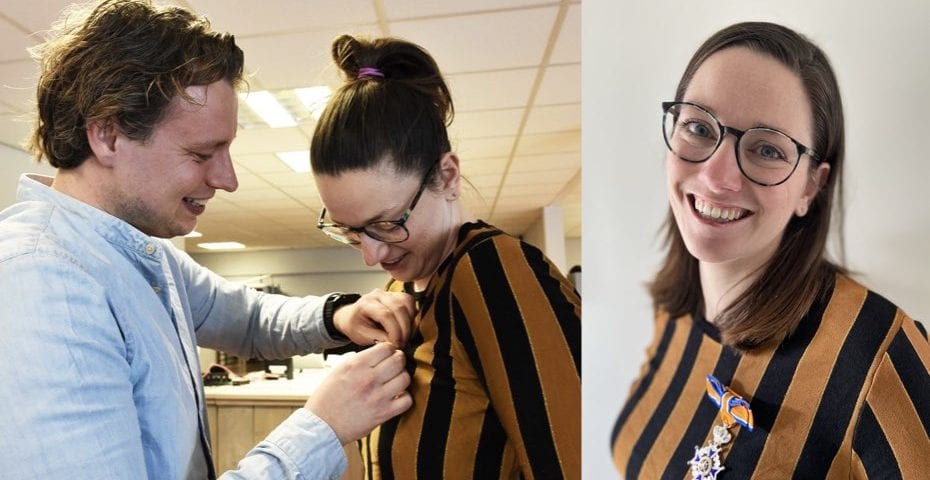 Iefke van Belkum (34) was surprised on Friday 26 March with the royal decoration Knight in the Order of Oranje-Nassau. It is an award for special merits in Dutch society. The Dutch swimming federation (KNZB), the Leiden Topsport Foundation, the Spieren voor Spieren Foundation (a charity to beat muscle diseases by children) and the water polo club ZVL-1886 had submitted the application. The Dutch king gave his approval.

Figurehead in and outside the pool

Part of the substantiation: “Iefke has been the figurehead of sports in Leiden, ZVL-1886 and Dutch water polo for many years. She achieved this award not only for her sporting achievements but also for her unbridled commitment as a volunteer within ZVL-1886 and as an ambassador of the Spieren voor Spieren foundation. She has also been a member of the Leiden top sport ambassadors of Topsport Leiden for years. She fulfills this exemplary role unpaid and with verve, especially among the youth of Leiden.”
Iefke van Belkum retired from playing in 2020 to start as head coach of the women team of ZVL- 1886. The 34-year-old resident of Leiden played for more than ten years for various national (youth) teams, two years for the University of Hawaii, three years for the Greek teams Ethnikos Pireaus and Olympiakos and one year for the Russian Shturm 2002. In the Netherlands, she only played for ZVL-1886.

A selection of her achievements: Olympic champion (2008), two-time winner LEN Trophy (2010 Ethnikos, 2013 Shturm), Greek national championship (2011 Olympiakos) and the Russian Cup (2012 Shturm). Van Belkum also won a lot of prizes at an individual level. She became – often more than once – the best player of the American, Greek, Russian and Dutch (cup) competitions. In 2009 she was the best player in Europe. In our Total Player 2020 award, she took 8th place in the overall ranking for the best female water polo player in the 21st century.

In the summer of 2013, Van Belkum retired from the Dutch team and returned to her beloved ZVL- 1886. Her return immediately resulted in the first national title in club history. After that, the club won several other prizes. In addition to being the head coach of ZVL-1886, Van Belkum is now also a trainer at the Regional Training Center Leiden, where she trains young water polo talents.