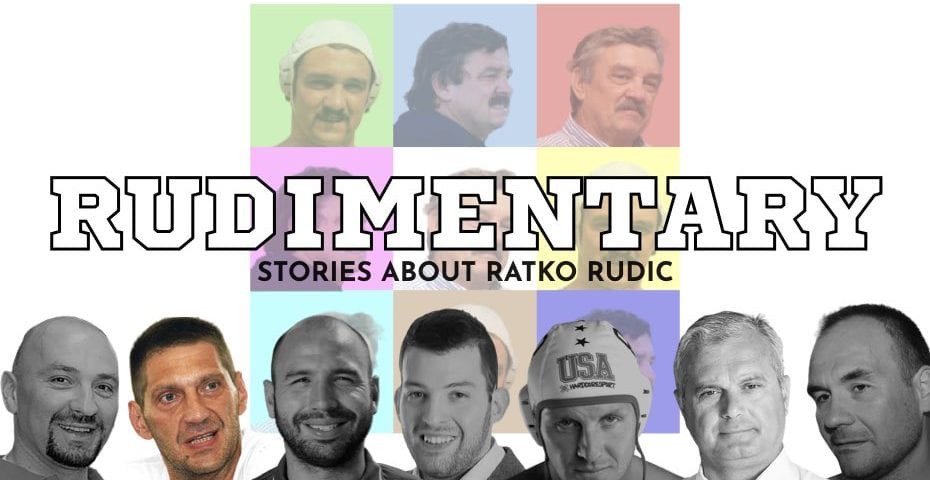 On this occasion, Total Waterpolo prepared several interviews with Rudic’s former players, who evoked the memories of the work with the great coach.

Igor Milanovic is one of just a few persons who won the Champions League both as a player and as a coach, and the only who did it with four different clubs – as a player with Mladost in 1990 and 1991, and with Catalunya in 1996, and as a coach with Partizan 2011 and Pro Recco 2015. He met Ratko Rudic for the first time when he was very young.

“I watched Ratko Rudic when I was in Partizan’s youth team, while he played for the senior squad. He was an excellent player. He was fast physically and had a “fast mind “. He was able to find a solution in the pool very quickly. I even had an opportunity to play along with him. I entered Partizan’s first team in 1981, Ratko Rudic was still a player, but he retired after a few months”

Shortly after the retirement, Rudic started to work as a coach in Partizan, while he became the head coach of the junior national team of Yugoslavia in 1983. A few days ago, Rudic mentioned that the silver medal won at the 1983 World Junior Championships is his favorite success. Next year, the Yugoslavian juniors won the silver at the 1984 World Championships. Milanovic was he member of these silver squads.

“These medals are essential for all of us, for Yugoslavian water polo. Before that tournaments, our country didn’t manage to take a medal at the Junior Championships.”

A lot of players of the Yugoslavian junior team in the early ’80s became great champions later.

Rudic was appointed as a head coach of the senior Yugoslavian team late in 1983. He recognized Milanovic’s potential and invited him to the national team, although he was just 18-years-old.

“I was honored to be in the team together with experienced players, winners of the numerous medals – Roje, Bebic, Krivokapic, Sukno, Djuho…. They accepted me fantastically”

“I was the best scorer at the first competition for the senior national team, at the tournament in Naples”.

Milanovic emphasized that Rudic didn’t have favorite players. All in the team were equal, nobody had privileges, but he also added:

“I have always felt that Ratko and I have a specific relationship. Of course, I wasn’t privileged, but he had confidence in me and my curiosity. He had a benevolent feeling for me.”

Two details from the Olympic Games in Los Angeles, when Yugoslavia won the gold, are confirmation of that trust.

“At the Olympic Games in Los Angeles, everything was well-organized, with a lot of events for the athletes outside the sporting fields, many of these were staged in the Olympic Village. The Los Angeles Games were a great experience for all of us, especially for me. I was just 19-years-old. It was marvelous. I remember a concert by the famous American rock band “The Beach Boys”. I had a  strong desire to listen to the “Beach Boys” live. The concert was held in the Olympic VIllage. But the concert was at the same time as our training session was. I asked Ratko if I could go to the concert. Firstly, he looked at me angrily. But after that, he let me go, and I listened to “Surfin USA”, live in Los Angeles!”

The water polo tournament in Los Angeles was ended with a final group played by a round-robin system. Six teams played in the final group. Yugoslavia and Team USA. were the favorites for the gold medal and they faced off in the last round. They were equal in points. Yugoslavia had a better goal difference. So, it needed a draw to keep the 1st place and win gold.

“Tomislav Paskvalin and I played at the center-forward position. During the tournament, I played some of the matches excellently, some not. On the last day of the tournament, we faced the USA. in front of 10.000 spectators. We came back, after we were three goals down (2:5) in the third quarter. Milivoj Bebic equalized three minutes from the end – 5:5. We have the gold medal in the pocket, but the crucial moments were yet to come. I was in the water when Bebic scored and I expected that Ratko would replace me by Paskvalin, who was experienced than me, in the final minutes. But Rudic didn’t do that. I played until the end. I was delighted because Rudic had confidence in me. His move gave me additional motivation to do everything to don’t let myself a mistake until the final buzzer. He trusted me, and that was a big stimulus for me in my further career.”

At the 1986 FINA World Championships in Madrid, Yugoslavia won the gold medal for the first time in the history of the WCH. The Yugoslavs beat Italy in the epic final, with four overtime periods. Milanovic became the hero of the match. He scored a winner, just 0,3 seconds before the end, for the final score 12:11.

“Yes, the tournament in Madrid was another important springboard for me. That goal marked our big success and my career. We fought a hard battle with the Italians. In the last attack of the fourth overtime period, Dubravko Simenc was preparing for the shot. Ratko shouted from the bench: “Pass the ball to Igor, pass the ball to Igor!”. I got the ball and scored a goal  for history.”

After the World Championships in Madrid, Yugoslavia, led by Rudic, won the silver at the 1987 European Championships (the second consecutive European silver, after 1985). Meanwhile, Milanovic became one of the key players of the national team.

Rudic’s squad arrived in Seoul, at the 1988 Olympic Games as the title-defender. But, it wasn’t easy to retain the title. Still, Yugoslavia managed to clinch the second gold in a row. The biggest rival was the USA again. The competition formula was changed comparing to the 1984 Games. After the group stage (in which the USA defeated Yugoslavia 7:6), the knock-out round was played. Yugoslavia and Team USA faced in the gold medal match. The game was very similar to the encounter between these two teams in Los Angeles. The USA led 4:2, while Yugoslavia equalized, and after the regular time, the score was 6:6. In the overtime period, Rudic’s squad was better for a 9:7 win.

“The Olympic Games in Seoul was the most important competition in my life. We were title-defenders, but the team was very changed in the previous four years. Several experienced players, like Bebic, Sukno, Krivokapic… retired from the national team. A new generation had a task to continue the successful row. And we managed it. We won the title, and Ratko Rudic finished his career in the national team of Yugoslavia with the gold medal.”

Coaching work with no compromises

Milanovic has been working successfully as a coach for more than ten years. Have you implemented in your coaching work something you have learned from Ratko Rudic?

“Yes, of course. In the first place, it is uncompromising ness. Ratko had no compromises. I work in the same way. I have never liked compromises. For me, the team is in the first place. Everything I work, I work in favor of the team. As a player, I also felt Ratko’s uncompromising ness. He didn’t let me leave training if I didn’t feel well, because he believed that I could work. Once, in 1985, I finished in a hospital, after the training. But, I learned a lot when Ratko coached me.”

Milanovic’s and Rudic’s paths separated late in the ’80s. They haven’t worked together again.

“I’m always glad when I meet Ratko Rudic. We always have a lot of topics to talk, and evoke memories. I wish him all the best – Milanovic, who is Red Star’s coach today, concluded.