Sabadell beat Terrassa while Boadilla win the derby in Madrid 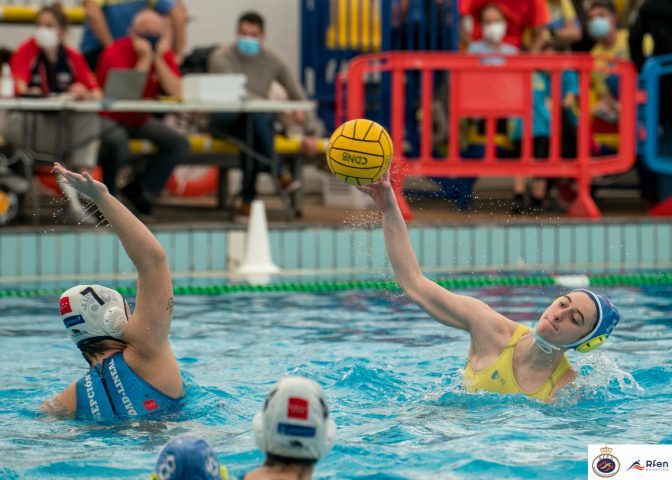 There were just the four games in Matchday 17 of the Women’s Spanish Division de Honor. In the clash between two of the top 4 teams in the league, Sabadell won fairly easily over Terrassa. Elsewhere, Mediterrani beat Rubi, Andreu won well in Zaragoza and the East side of Madrid will be happier than the south-east with Boadilla beating Concepcion

Sabadell made no mistakes today at Can Llong as they relatively comfortably saw off the challenge of CN Terrassa. Maica Garcia Godoy netted a hat-trick to take her season tally to 40 goals in 6 games, and only her left-handed team mate, Judith Forca Ariza, has more goals this season (43) as she also bagged two more in today’s game. The match itself was even as far as half-time, but halfway into the fourth period, Sabadell amassed a 6 goal lead thanks to goals from Gonzalez (3), Van der Sloot, Steffens,  and Perez (2) to put the result beyond doubt. Xavi Perez may not have expected to secure the win today, but its the sort of game they needed to get something from if they are hoping to catch Mataro in 2nd place – who are three points better off with a game in hand. Both sides, however, will be confident of a win next, as Terrassa host Zaragoza, and Sabadell travel to the capital to take on Concepcion.

Mediterrani stay fourth in the league with a solid home win over Rubi. Clara Espar led the scoring for Maria Diaz’s side with three goals, while there were double scores for Julia Cereijo, Paula Crespi and the American, Ashley Grossman. Elena Ruiz was unsurprisingly on target for Rubi (4), amid reports earlier this week that she may leave for Sabadell at the end of the season. Mediterrani next face a trip to CN Catalunya, while Rubi have a tough assignment at Mataro.

In the Madrid derby, Boadilla ran out winners courtesy of five scores from Marta De Quinta Ramirez. Concepcion were holding their own, but a nightmarish three minutes in the second period, where they conceded four in a row from Raquel Clemente, Sara Gonzalez, and Marta De Quinta (2), set a pace that Concepcion could not ultimately keep up with. Boadilla are 9th, and now level on points with Sant Feliu, although Feliu do have a game in hand. It just so happens that Boadilla’s next game is against Feliu, which will be all important for those two teams to climb out of the bottom 4.