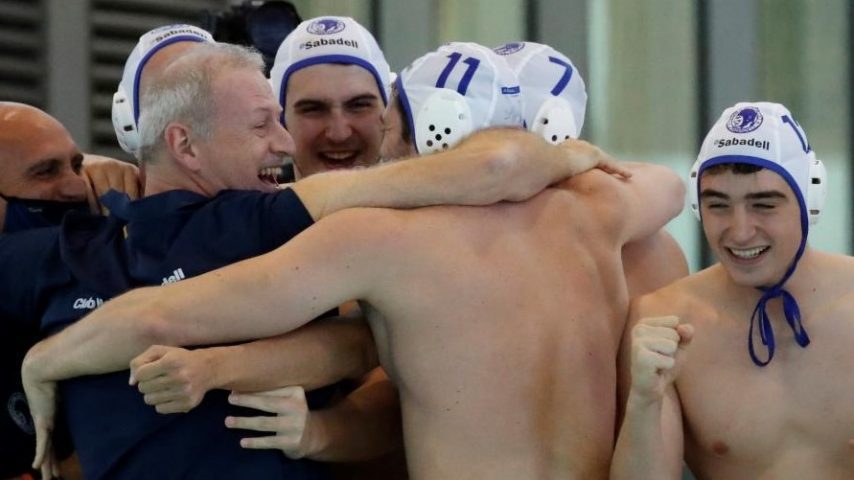 The Spaniards beat Telimar Palermo (Italy) in the return of the Euro Cup final – 11:5 and overturned a two-goal deficit (7:9) from the first match in Sicily.

The final score says all. An outstanding defense, especially in the first half, led Sabadell to the trophy. The Spaniards didn’t concede a single goal in the first 16 minutes. One of the heroes of the victory was their goalkeeper Edoardo Lorrio. At the middle break, they led 4:0. In the remaining two periods, Sabadell increased the margin to six.

This is the first-ever European trophy for the male team Sabadell (the female squad is one of the best in Europe). Sabadell’s men have played in the European finals twice. Ten years ago, they lost to Savona in the LEN Euro Cup final.

Telimar debuted on the international stage this season. So 2nd place in the first European season in the club’s history is a fine success for the Italians.

Both teams entered the match carefully. They focused on defense. Kanstantin Averka broke the deadlock. He scored from the perimeter 62 seconds before the first break to give Sabadell a 1:0 lead.

The hosts dominated the second period and built a 4:0 lead by halftime.

Telimar finally got on the scoreboard in the 18th minute – Andrija Basic netted for 1:4. But, Cabanas responded immediately converting a man-up (5:1).

Still, Telimar cut the deficit. Max Irving scored two back-to-back goals (both from the penalty shots) and the Italian side trailed by two goals (3:5) in the 22nd minute. However, shortly after, Sabadell doubled its advantage. Banicevic scored from 6 on 5 (6:3). A minute and 20 seconds before the last break, Telimar’s goalkeeper Gianmarco Nicosia committed a penalty foul. Kanstantin Averka didn’t have a difficult task (a field player replaced Nicosia for that penalty) and made no mistake from the 5m line for 7:3. Andrija Basic closed the third period and narrowed the margin (4:7). Everything was still open before the final eight minutes.

By the middle of the fourth period, Sabadell went to 9:4. Telimar didn’t surrender, but it wasn’t able to come back. Max Irving scored his third goal to reduce the gap in the 29th minute (5:9). Sabadell netted two in the remaining time for an 11:5 victory.