Serbia and Italy battle for gold at World Junior Championships

Serbia and Italy will battle for the World crown in Prague tomorrow.

The national teams of Serbia and Italy advanced to the final of the 21st World Junior Men’s Championships in Prague.
Serbia defeated Hungary 10:7 in the first semifinal. The winner in the second semifinal was decided after a penalty shootout. The encounter between Italy and Montenegro was ended in a 10:10 draw. The Italians were successful in the shootout. They recorded a 14:12 win. For the second time in two days, Italy survived a penalty drama. Yesterday, they beat Spain in the quarterfinals in a penalty shootout.

Serbia and Italy were among the medal winners at the 2019 World Championships. Two years ago, Serbia won silver and Italy bronze in Kuwait.

Hungary and Montenegro will face off in the bronze medal match. Montenegro still hasn’t won a medal at the World Junior Championships, while Hungary hasn’t climbed the podium since 2015 when they were 3rd. 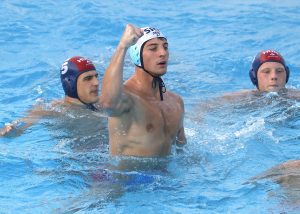 It took a while for the first goal to be scored. Szeghalmi broke the deadlock in the 6th minute. Less than a minute later, Molnar converted a man-up to double Hungary’s lead. Radovic put Serbia on the scoreboard shortly after.

Szeghalmi opened the second period for 3:1. The Serbs tightened their defense after that and started finding ways to break Hungary’s strong defense. And they succeeded. Serbia scored four goals in a row (three with an extra player and one action goal) to turn around a 2-goal deficit to a 5:3 lead (13th minute). Vince Vigvari scored with an extra player for 4:5.

The third quarter was a hard defensive battle. Goalkeepers Gyapjas (Hungary) and Misovic (Serbia) played leading roles. Vince Vigvari added his second goal in the 19th minute to level at 5:5. Defenses dominated in the following minutes, but even four goals were scored in the last 74 seconds of this period. Radulovic found the net from the distance to put Serbia in front (6:5). Konarik replied immediately for 6:6. However, the Serbs netted twice in the last 39 seconds (Martinovic and Pljevancic with an extra player) and entered the fourth quarter leading 8:6. 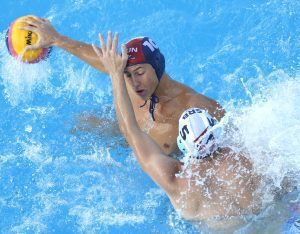 Serbia kept the momentum gained at the end of the third quarter. In the first possession in the 4th period, Radulovic, who was picked the man of the match, scored one more nice goal from a distance, and his team earned a 3-goal lead for the first time (9:6). Konarik reduced the gap to 7:9 in the middle of the quarter, but Serbia controlled the match. Twenty-five seconds before the end, Milojevic found the net from the right-wing and closed the contest. Serbia secured the final game.

“This was a tough battle. We opened the game badly, but we found our rhythm on time and took control. We played like one. The team effort was a key to the victory. We don’t think much about our rival in the final. The most important will be to fulfill our tasks, given by our coach, as we did today”, Serbia’s goalkeeper Vladimir Misovic told Total Waterpolo immediately after the game. 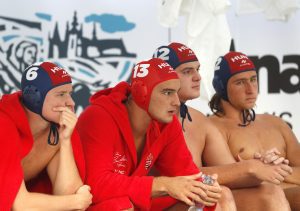 Hungary will play for bronze 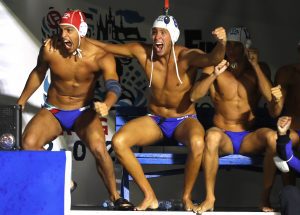 Italy dictated the pace for most of the time. The “Settebello” even had a 4-goal lead. Still, Montenegro managed to erase the deficit and had a chance to win, but it fell in the shootout.

Mladossich scored an opener in the first minute, and Occhione doubled Italy’s advantage midway through the first period. The Montenegrins only found the net for the first time in the 7th minute, while Draskovic equalized 25 seconds before the middle break.

Italy dominated the second period. They scored two quick goals in the first two minutes of the quarter to regain a 2-goal lead (4:2). Three minutes before the middle break, Korac converted a man-up for 3:4. However, Parella responded immediately in the same way, from 6 on 5, for 5:3. Iocchi Gratta gave Italy a 6:3 advantage at the finish of this quarter.

Montenegro’s Perkovic opened the third period with an action goal for 4:6. However, Italy’s advantage increased to four goals shortly after. Occhione found the net from 6 meters and made it 8:4. The “Settebello” had a 9:5 advantage (21st minute), and then Montenegro started coming back. The Montenegrins came very close when Stanojevic scored for 8:9. Occhione replied with a man up for 10:8. However, Montenegro finally caught up with the rival in the 29th minute, when Draskovic found the net after a counter-attack for 10:10.

In the following minutes, both teams had chances to score a winner, but both defenses, commanded by goalkeepers Spinelli (Italy) and Isljamovic(Montenegro), were up to the task, so the match entered the shootout.

Just like in yesterday’s shootout against Spain, Italy’s scorers made no mistake. Four Italians found the net in the series. On the other end of the pool, Spinelli managed to block two shots (from Korac and Vucurovic). Just like yesterday, his saves proved crucial for Italy’s victory. 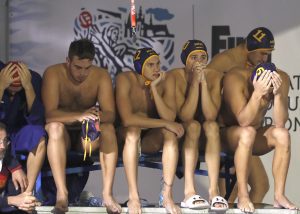 Montenegro produced a comeback, but it wasn’t enough for a win 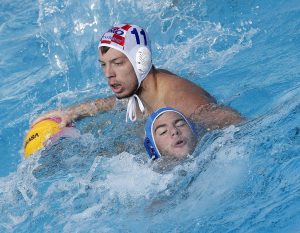 Croatia beat Greece, the World champion from 2017 and 2019, easier than expected. The first half offered a flood of goals and a few twists and turns, but after the middle break, the match turned into a one-sided contest.

The Croats earned a 3-goal lead already in the first quarter (4:1 and 6:3), but the outgoing champion managed come back. In the 15th minute, the Greeks went in front (8:7). Even four goals were scored in the last 80 seconds of the first half. Greece had a 10:8 advantage 33 seconds before the middle break, but Roko Akrap closed the second quarter by converting a man-up for 9:10. 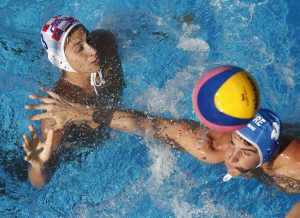 Early in the third quarter, Pouros doubled the Greeks’ advantage (11:9). Shortly after, the Croats’ domination started. Croatia, led by Penava, Zuvela (the MVP of the match), and Brubnjak, responded with six goals in a row and jumped to a 15:11 lead in the 26th minute. Kechalaris broke Croatia’s series ( he converted a man up for 12:15), but not for long. Croatia added five goals in the last five minutes for a convincing 20:12 victory. 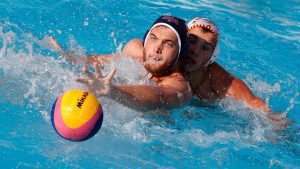 Spain ran over the USA for the second time at the 21st World Junior Championships. Five days ago, Spain thrashed the USA in the group stage (20:10). On Monday in Group B, the USA kept up with Spain until 3:3. Today, the Spaniards dominated from the first whistle. They built a 4:0 lead in the first quarter. Team USA got on the scoreboard in the 9th minute (Tierney 1:4). However, Spain didn’t let the USA go further. The Europeans netted six unanswered goals for a 10:1 lead. Already in the 22nd minute, they reached a double-digit margin (14:4). Unai Biel Lara,who netted five goals, was voted the man of the match. 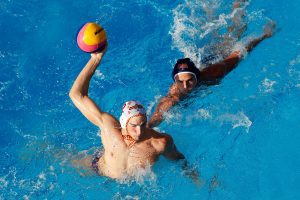 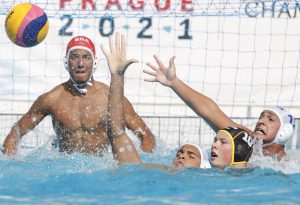 The Germans can be satisfied with 9th place as this was the first U20 World Championships for Germany after 14 years of absence. Brazil was 17th two years ago, so the South Americans shouldn’t be disappointed. Today’s 9th-place match was the second encounter between Germany and Brazil in Prague. Germany demolished Brazil in the group stage (14:5), and it achieved a more convincing win today and proved that it was much better than the rival. The Europeans, led by Zoran Bozic, who had an excellent percentage of shots (8/10) , dictated the pace throughout the match and didn’t let Brazil surprise them. 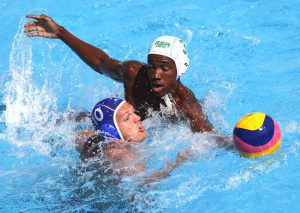 Russia proved too strong for South Africa, which kept up with the Europeans until the middle of the first period and 2:3. In the following twelve minutes, the Russians netted eight unanswered goals to gain an 11:2 advantage and played relaxed in the second half of the game. Each of the two teams made two steps ahead, comparing to the previous championship. Two years ago, Russia defeated South Africa 20:10 in the match for 13th place. 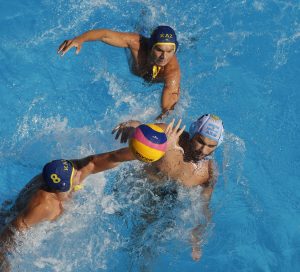 Argentina defeated Kazakhstan for 13th place thanks to a comeback in the final minutes. The first quarter belonged to the Kazakhs. But, they missed many chances with a man-up in the second period. The South Americans managed to turn around the deficit to a 6:5 advantage by halftime. Still, the Asians leveled at 7:7 before the final quarter. Kazakhstan earned a 9:7 lead with two goals by Gruzintsev early in the fourth. Argentina found its rhythm, produced a 4:0 rush for an 11:9 lead with 49 seconds left on the clock, and secured the win. 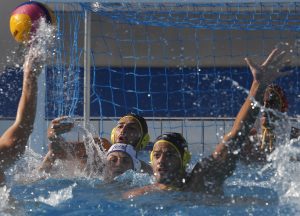 Seven players made the scoresheet in the game which saw 19 goals. Mohamed Ezzat was the best scorer with five goals, but the Slovaks, led by Varga, Adamec, and Tisaj, recorded a narrow win and finished in 15th place. Both teams had ups and downs. Slovakia grabbed an early 3:0 lead, Egypt had a 4:3 advantage in the second period, but the Europeans had a 6:5 advantage at halftime. Egypt dominated the third period and entered the final quarter with a 2-goal advantage (8:6). Slovakia was coming back step-by-step during the last period, and Tisaj scored a winner in the 31st minute