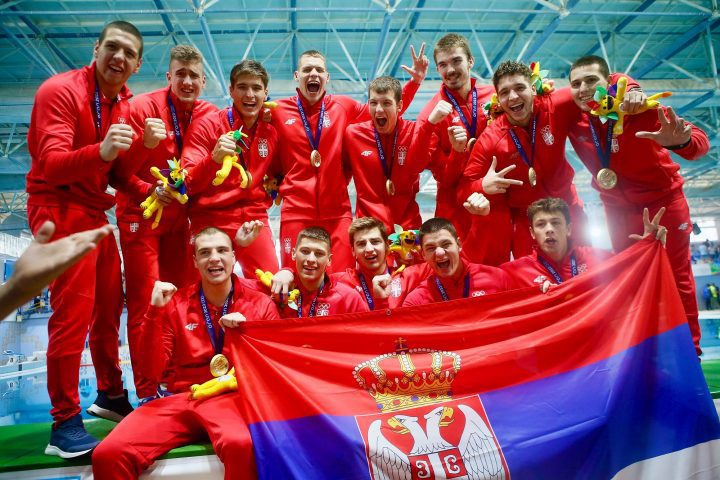 Serbia won the gold medal at the 19th Mediterranean Games in Oran (Algeria). Serbian juniors defeated Montenegro narrowly – 9:8 in the final. Bronze goes to Spain, which beat Italy convincingly in the third-place game (16:8).

The final match was the second encounter between Serbia and Montenegro in Oran. Interestingly, the results of both games are the same. Serbia, coached by Uros Stevanovic (Radnicki head coach), edged out Montenegro 9:8 in Group B. The head coach of Montenegro’s Mediterranean team is Milan Cirovic.

Today, Montenegro started better and earned a 2:0 lead. Serbia got on the scoreboard only seven seconds before the end of the first quarter (1:2). That goal opened Serbia’s series, which jumped to a 4:2 lead (14th minute). But new twists were yet to come. Montenegro responded with a 5:1 series and earned a 7:6 advantage (23rd minute). The Serbs leveled before the last break (7:7), while Kovacevic gave them an 8:7 advantage early in the final quarter. Lazar Kovacevic equalized with a man-up (8:8) but Urosevic responded immediately with an action goal. Serbia earned a 9:8 lead with 02:33 minutes to go and kept the advantage until the final buzzer.

Serbia defended the title of the Mediterranean champion won at the previous Games, held in Tarragona in 2018. But, the water polo tournaments in Tarragona and Oran can’t be compared. Four years ago, the senior teams competed. The U18 water polo squads represented their countries in Oran, while the seniors are in Budapest at the World Championships, where Serbia and Montenegro will face tomorrow in the match for the 5th-8th place classification.

There was no female water polo competition at the 2022 Mediterranean Games.

Spain defeated Italy by six goals (14:8) in the group stage. Today, the Spaniards recorded a more convincing win, although Italy opened the bronze-medal game very well. The “Settebello” built a 2:0 and 4:1 lead. The Spaniards leveled at 4:4. Italy went in front once more – 5:4. However, Spain had a 6:5 lead at halftime. The Spaniards added four unanswered goals in the third period to build a 10:5 advantage. After that 0:6 series, there was no way back for Italy.

Articles about the Mediterranean Games