Serbia, Italy, Hungary and Montenegro jump into semifinals in Prague

Serbia, Italy, Hungary, and Montenegro will play in the semifinals of the World Junior Championships in Prague tomorrow.

Serbia, which won silver in 2019, will play in the semifinals of the World Junior Championships for the 8th time in a row. The Hungarians return into the last four after four years (they won 4th place in Belgrade in 2017). Italy, which has won many medals in this competition, as well as Serbia and Hungary, played in the semis in 2019 and won bronze. Montenegro has played in the semifinals of the World U20 Championships as an independent country just once so far. It won 4th place in 2009.

Hungary and Serbia will face off in the first semifinal. Italy will play against Montenegro.

Today’s program at the Podoli Swimming Complex lasted for more than 12 hours. All 18 teams were in action. The first game started at 8:00 AM, and the last one was finished after 9:00 PM.

Duels between Croatia and Serbia are water polo classics in all age categories. Today’s encounter between the juniors from these two countries didn’t disappoint water polo fans. There were a lot of twists and turns in this great battle. Still, Serbia led for most of the time and prevailed in the end.

The Serbs earned a 3:1 lead in the first eight minutes. All three goals for Serbia were scored by Vasilije Martinovic, while Tomasovic netted for Croatia in the first period. 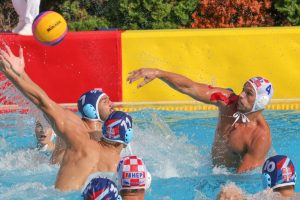 The Croats had a great start to the second quarter. They scored three action goals in 70 seconds and went in front (4:3). But that wasn’t the end of their series. In the 11th minute, Burburan converted a man-up for 5:3. However, the Serbs came back quickly and equalized – 5:5 (13th minute). Both sides scored a goal each in the last minute of the first half, and the rivals were tied at 6:6 at the middle break. Early in the third quarter, Serbia regained a 2-goal lead (8:6). The Croats caught up with the Serbs in the 23rd minute (8:8). Still, Serbia’s Stanojevic closed the third period with a goal from an extra to give his team a 9:8 lead. 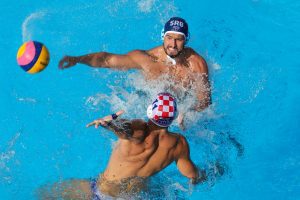 The Serbs produced a 3:0 series in the first three minutes of the final quarter, which proved vital for their win. They jumped to 12:8 and maintained a four-goal difference for a while. Croatia managed to half the deficit. A minute and a half before the end, the Croats trailed 10:12. Everything was still open, but Serbia’s defense worked well in the remaining time. After a wrong pass by the Croatian team 43 seconds from the end, it was clear that Serbia would keep a win.

Vasilije Martinovic, who scored four goals, and won three swim-offs (only in the first quarter a Croatian player was faster), was voted the MVP of the match. 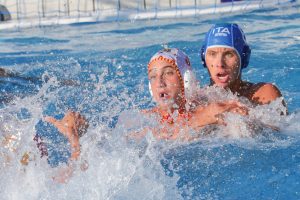 Italy and Spain were in a neck-and-neck race throughout the game. The lead was constantly changing the side, while the distance between the teams was never more extensive than a goal.

Italy led twice in the first half (2:1, 3:2), but the Spaniards had a slim advantage (4:3) at halftime. After a balanced third period, Iocchi Gratta leveled at 6:6 in the 27th minute, and he put Italy in front with 02:30 minutes to go (7:6). Both goals were scored from the 5m line. Interestingly, three of Italy’s four goals in the second half came from penalty shots. The Italians were keeping a 2-goal lead successfully for two minutes. Still,30 seconds before the buzzer, Ponferrada scored on an extra for 7:7, and the match entered the shootout. 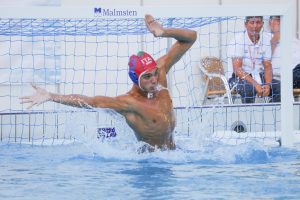 The Italians made no mistake in the shootout. Four Italian shooters found the net. On the other side, Spain’s Ponferrada hit the post in the first series of shots, while Italy’s goalkeeper Roberto Spinelli saved a shot from Casabella in the third round and sent Italy to the semifinals. Everything was over after the 4th round of shots. Italy’s captain Filipo Ferrero, who scored three goals in the regular time, and one in the shootout, was the man of the match. 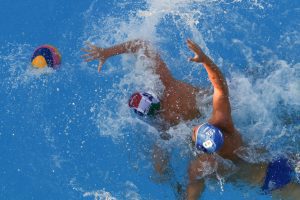 After two gold medals in a row (Belgrade 2017 and Kuwait 2019), Greece will return home from the World Junior Championships empty-handed. Hungary secured the win in the middle of the game by earning a 4-goal advantage. Greece put a lot of effort into a comeback, but the Hungarians controlled everything in the pool.

The game was an even contest in the first ten minutes. The Hungarians, supported by a group of fans in the stands, took the lead three times, while Greece managed to equalize on each occasion. In the 9th minute, Greece Myrilos converted 6 on 5 for 3:3.

However, the Hungarians ruled the field in the following eight minutes. The Hungarian team, which had an excellent percentage of the power play shots, started breaking the opponent in the second period. Led by captain Akos Konarik (the MVP of the game), and Vendel Vigvari, the Hungarians built a 5:3 lead before the middle break. 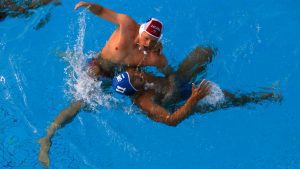 Hungary added two goals in the first two minutes of the third quarter and stretched the margin to four (7:3). That 4:0 series was decisive for the outcome. The Greeks couldn’t come back. They cut the deficit to two goals three times in the last three minutes (7:9, 8:10, 9:11), but it was too late. Hungary celebrated a well-deserved victory. 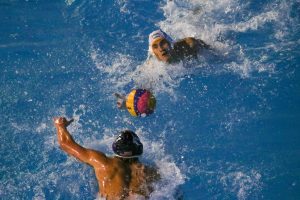 Montenegro killed all the suspense quickly. The USA managed to equalize just once (1:1), but the Montenegrins were four goals ahead of the rival already at the end of the first period (6:2). Danilo Radovic found the net for 7:2 from a counter-attack in the 10th minute. In the middle of this period, Team USA scored its third goal (3:7), but the Europeans replied with three by the end of the first half for 10:3. Miroslav Perkovic opened the third period with a goal for 11:3 and there was no way back for the Americans, but the Montenegrins didn’t slow down and recorded a very convincing win. Jovan VUjovic, who scored five goals, received the award for the MVP of the match. 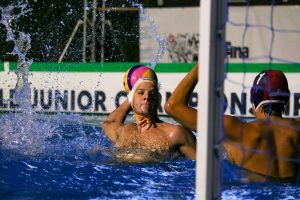 Brazil and Germany will play for 9th place.

Brazilians, who committed only three personal fouls in today’s game, beat South Africa with ease. The Brazilians opened the match with a 3:0 lead. However, the Africans managed to equalize (4:4) early in the second quarter. After that, Brazil, led by Bruno Chiappini, responded with seven straight goals, earned an 11:4 advantage, and cruised to a win. 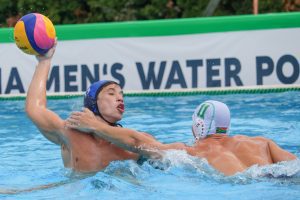 Germany led throughout the match against Russia. The Russians were chasing Germany all the way but failed to equalize and secure a penalty shootout. In the 11th minute, Germany built a 3-goal lead for the first time (4:1). Russia managed to cut the deficit (3:4). Germany netted two goals in the last 47 seconds of the second quarter and entered the third period leading 6:3. Russia was the better team in the second half of the game and reduced the gap to one goal three times (5:6, 6:7, 7:8). Their seventh goal came three and a half minutes from the end. In the remaining time, Russia missed two man-ups and had the last possession, but Germany kept a slim advantage. 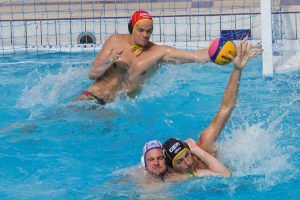 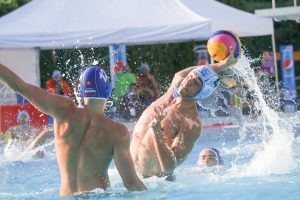 Argentina and Kazakhstan advanced to the 13th-place match.

Argentina’s defense was superb in the first match of the day (that started at 8 AM). Both teams needed some time to wake up. The first goal was scored just 40 seconds before the first break when Argentina’s Marquez converted a man-up. The South Americans went to 5:1 by halftime. The Slovaks found their rhythm in the third period, but Argentina dominated the final eight minutes. 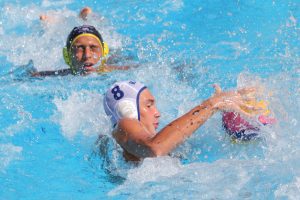 In the middle of the 2nd quarter of the encounter between Kazakhstan and Egypt, the score was 2:2. After that, the Asians scored four unanswered goals for 6:2, and Egypt couldn’t come back. 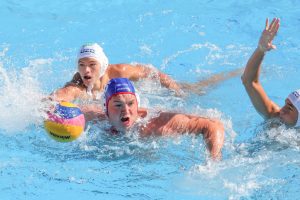 The Czech Republic recorded its first-ever win at the World U20 Championships. The hosts debuted at the World Junior Championships. They suffered four defeats in the group stage. Yesterday, Egypt was better than the Czech. Today, the home side was too strong for Uzbekistan and scored 19 goals. The hosts opened the match with a 4:0 lead. Uzbekistan came close in the second period (4:5). But, the Czech Republic built a 10:5 lead by halftime, and their win wasn’t in danger. 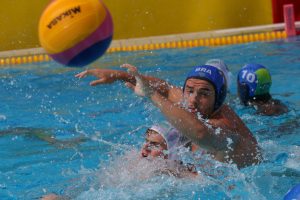