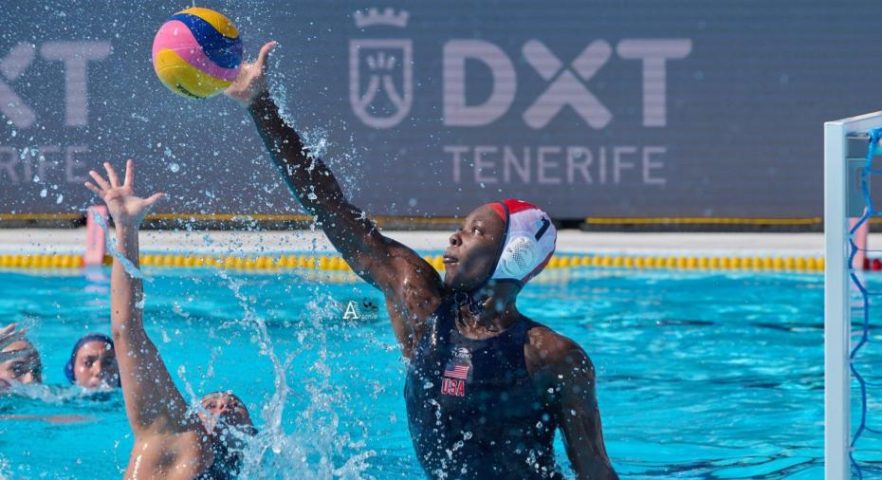 The Olympic and World Champions have won bronze at the World League Super Finals after a penalty-shootout victory over the Netherlands.

The game was tied 11-11 in regulation time; Ashleigh Johnson made a good save to keep out Marit Van der Weijden’s penalty to secure the victory in the match.

Hungary and Spain will face off later in the gold medal match. Earlier today, Italy and Canada secured victories over Australia and New Zealand to finish 5th and 7th respectively.

The United States will take home a bronze medal at the World League Super Finals after defeating the Netherlands 5-4 on penalties. The game was tied 11-11 after 32 minutes.

The teams were very even in the game, far more even than the 9-6 win for Team USA on the first day of the competition.

The reigning World League Champions, who later today will lose their crown to either Spain or Hungary, were the more composed in the shoot-out. As for the Netherlands, it was the second time this week that they lost a penalty shoot-out, having been defeated the same way against Canada in the group stage.

Jordan Raney put in a world class performance, netting four goals in normal time, and dispatching a penalty in the shootout. It wasn’t just the number of goals, but the type of scores from Raney that lifted her side when they needed some inspiration.

The Netherlands showed excellent character in the game, regaining momentum after trailing by two goals on two occasions. Marit van der Weijden missed the crucial penalty in the shoot-out, but she had a great game in normal time. Van der Weijden, Keuning, Rogge and Moolhuijzen all netted braces in regulation time.

Compared to the United States’ very high standards, a bronze medal is nothing to shout about. But with a much changed squad, with a relatively inexperienced group of players, Adam Krikorian can be satisfied with the way his side played this week.

The two teams were level after eight minutes (3-3). The United States found the net via  perimeter shots by Jenna Flynn and Denise Mammolito and a penalty shot from Ryann Neushul. The Dutch looked threatening from the centre, with Viviane Sevenich and Marit Van der Weijden (penalty) working well for the oranges. Maartje Keuning also netted from a well-worked extra-player scenario, towering above her defender to fire home, off a nice pass from Brigitte Sleeking.

Some classy attacking play put Team USA out ahead in the second. Jordan Raney’s shot kept Britt van den Dobbelsteen rooted to the spot; winger Jewel Roemer confidently put away a near-post slam; and Tara Prentice could hardly miss when left totally unmarked in the middle. An excellent penalty by Lola Moolhuijzen kept the Dutch within two, but a strike with a second left on the clock by Bayley Weber gave the USA a deserved three-goal lead at halftime (7-4).

The third period was really a tale of two halves.

The Netherlands were absolutely outstanding in the first four minutes, with some slick attacking play drawing them level. Viviane Sevenich scored a vintage backhand before Marit Van der Weijden pulled off a cross-cage screamer moments later. After some silky build-up play, Nina ten Broek finished the action off well on the left side (7-7).

In the second half of the third quarter, it was some magic by Jordan Raney that gave the United States back their two-goal lead. Both goals were on the right side; the first was an absolute cross-cage rocket past Dobbelsteen before the second was planted down the channel in the bottom right corner.

Penalties were beckoning in the last, as the Dutch recovered from a two-goal deficit. It was two mistakes by Ashleigh Johnson that allowed the Oranges back into the contest, with the USA keeper twice fumbling shots that you’d expect her to save from Bente Rogge and Lola Moolhuijzen.

Maartje Keuning briefly gave Eva Doudesis’ team the lead, but scores by Fattal and a hat-trick strike by Raney sent the game to penalties.

In the shootout, Ashleigh Johnson made up for her 4th quarter errors with an excellent penalty save from Marit Van der Weijden’s shot.