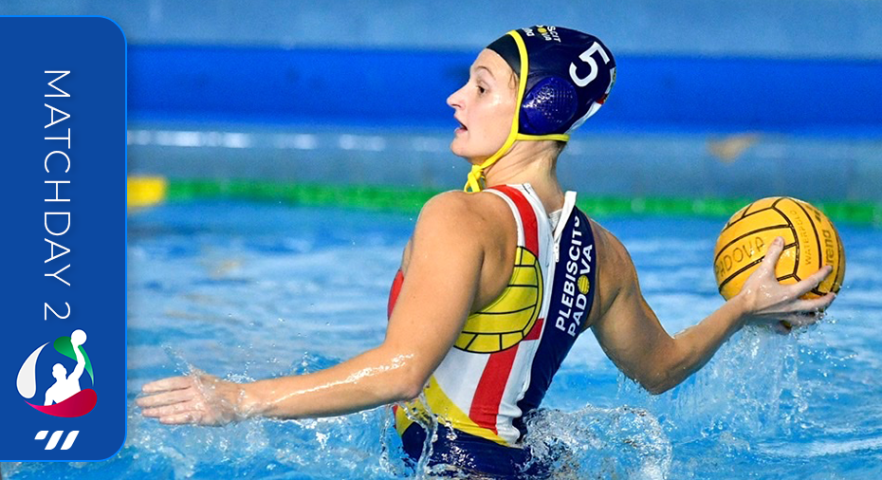 There were four games in the women’s Italian A1 this weekend, with healthy victories for the league’s top teams, and tight results lower down the division.

Plebiscito are top of the league, defeating Bogliasco by ten scores (19-9), while SIS Roma are hot on their heels are SIS Roma, who overcame Rapallo in a hard-earned 18-11 win away from home. Como and Florentia both secured their first points of the season with narrow victories against Bologna and Brizz respectively.

Ekipe Orizzonte were not in action this weekend, with their matchday 2 fixture at Trieste scheduled for 16th November – although that game may well be rescheduled further due to the women’s Champions League.

Five goals from Cecilia Nardini and a quad from Sofia Giustini helped Marco Capanna’s SIS Roma pick up decent points on the road at Rapallo.

The first quarter was fairly even, with hat-tricks in the opening quarter for players on both sides. Sofia Giustini, a rising star in the national team, netted three, as did a veteran of Italian water polo, Rapallo’s local legend Roberta Bianconi.

Both of those players scored their fourth goals in the game in the second quarter, alongside Chiara Tabani and Benedetta Carbona, to keep the game on a knife-edge at half-time (6-7).

Roma broke away on the scoreboard in the third, with braces from Chiara Tabani and Cecilia Nardini, both of whom completed their hat-tricks, to help Roma build a six-goal cushion (13-7).

Chiara Ranalli got in on the action in the last period with two quick goals inside the first two minutes to essentially seal the points for Roma.

Despite trailing after the first period, Plebiscito secured a second win of the season with a routine trip to Bogliasco, running out 19-9 winners. Giusy Cition was the most prolific in front of goal with four scores, although Laura Barzon, Vanda Valyi, and Elise Queirolo alltallied up three scores each.

Giulia Millo then gave the hosts a surprising 4-2 lead, but Plebiscito fought their way back into the game, and three of their more experienced players helped to steady the ship; Laura Barzon, Elisa Queriolo, and Alessia Casson all netted to turn the game around at half-time.

In the second-half, Stefano Posterivo’s delivered a killer blow to the hosts, with five goals on the trot (three from Giusy Citino, two from Elisa Queirolo) to put the game firmly in their control going into the final quarter.

In chasing the game into the last, Bogliasco seemed to run out of legs, and the super-quick Vanda Valyi exploited that, scoring a hat-trick in the final eight minutes.

In a really tight contest, Como secured a vital victory against Bologna. In a game where eventually every chance counted, Como were simply more efficient today in front of goal.

Como took a 2-0 lead in the first thanks to goals from Gaia Lanzoni and Maddalena Fisco, and while the visitors found a foothold in the second quarter thanks to scores by Anna Repetto and Martina Lepore, Como took a narrow 4-3 lead into the half-time break.

Bologna stunned Como in the second half with a 2-0 quarter, thanks to Miriam Marchetti and an extra-player score by Elena Altamura.

But whatever Andrea Pisano said in their team talk seemed to work, as a steady flow of three goals in three minutes put Como up by two goals (Lanzoni, Tedesco, and Iannarelli). Despite a tense last period, Bologna could only find one of the two goals they needed to get something from the game (via Repetto).

Florentia sealed their first win of the season, narrowly slipping past Brizz. Florentia twice had to come from behind, including in the last quarter

Letizia Nesti scored twice, and Sara Cordovani scored a hat trick to lead the scoring for their team.

The first quarter followed a pattern of Florentia scoring and Brizz adding one back. Patani, Nesti, Landi, and Cordovani all netted for the hosts, while Mascari, Sapienza, and Giuffrida replied for Brizz.

Brizz then took a 5-4 lead in the second quarter, with Francesca Sapienza adding her second of the game on the man-up, while Ana Milicevic gave Brizz the lead. Sara Cordovani and Alessia Gattini put Aleksandra Cotti’s Florentia back in the lead before the end of the third quarter (7-6).

However, once again, Brizz double scored and took the lead in the last quarter (Giuffrida and Sapienza), but Florentia rallied to bag three consecutive scores, the winning score coming from Noura Fittori, and the last coming from Letizia Nesti with just 50 seconds to play.