Spain and Greece are the first semifinalists of the men’s Olympic water polo tournament.

Spain defeated the USA 12:8 in the first semifinal, while Greece beat Montenegro convincingly 10:4.

Both teams return to the final after a long period. Spain’s previous appearance in the semifinal was in Sidney in 2000. The Spaniards won 4th place in Australia 21 years ago. They have been waiting for a medal since 1996. They clinched the gold in Atlanta. The Greeks reached the semifinals just once – they finished 4th in Athens in 2004.

On the other side, after three consecutive semifinals and three losses in the bronze-medal matches (2008, 2012, 2016), Montenegro didn’t secure a spot in the last four. The Montenegrins had a lot of problems with exclusions today.

It was expected that Spain, the only team that had a perfect record in the group stage, would beat the USA, but the Spaniards had to fight hard to win.

The game was an even contest. The Spaniards made a 4-goal difference in the last few minutes of the game.

The first goal was scored in the 4th minute. Felipe Perrone converted a man-up to give Spain a 1:0 lead. But, in the next possession, Hallock equalized. The Europeans managed to build a 3:1 lead in the 7th minute. However, the USA caught up with the rival before the first break. Hannes Daube netted twice in the 8th minute for 3:3.

Early in the fourth, Daube added his third goal, and the Americans went in front – 4:3. But, Granados and De Toro gave Spain a 5:4 lead. After a few twists and turns, the sides were tied at 6:6 at halftime. 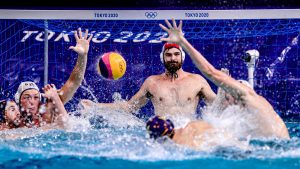 Sanahuja opened the second half with an action goal for 7:6, but it turned out that it was the only goal in the third quarter. The USA missed a few nice chances with a man-up in this period. Besides, Spain’s experienced goalkeeper did a great job (he collected 12 saves today).

In the 27th minute, Munarriz converted a penalty and doubled Spain’s advantage (8:6). Cupido converted a man-up for 7:8 with five minutes left. After that, Spain netted two action goals (Mallarach and Tahull) for 10:7 and broke the tough rival. A minute before the end, Obert found the net for 8:10, but Spain secured a convincing win with two goals in the last 36 seconds.

Greece and Montenegro faced shortly before the Olympic Games. Montenegro convincingly defeated the Greeks in the World League semifinals in Tbilisi (8:4). The Olympic quarterfinals offered a different storyline.

Montenegro lost three derbies in Group A, and reached the quarterfinals thanks to victories over Australia and Kazakhstan.

Greece played excellently in defense. Still, one of the factors that made a difference was that Montenegro’s coach Gojkovic had only10 available players in the second half due to exclusions. 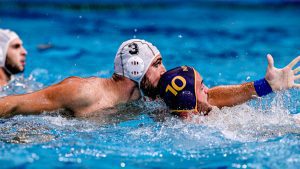 Both defenses worked well in the first quarter. Genidounias gave Greece a 1:0 lead in the 6th minute.

Drasko Brguljan opened the second quarter with an action goal for 1:1. But, Greece found the net twice before the middle break and entered the second half leading 3:1.

After just 20 seconds of play in the third, Vladan Spaic received a red card because of a rough foul. Just 20 seconds, later Montenegro’s captain Drasko Brguljan committed a penalty foul and protested after that. Referees penalized this kind of behavior with an exclusion with substitution, and Brguljan joined Spaic and had to left the pool and the bench.

Konstantinos Genidounias, the man of the match, converted that penalty to a 4:1 lead. He added two goals by the end of this quarter and Greece jumped to a 6:1 lead a minute and 51 seconds before the final break. The 6th goal came from a penalty shot. Marko Petkovic committed his 3rd personal foul before that penalty, so the match was over for him too.

The Montenegrins entered the final eight minutes with only nine players. They tried to come back but with no success.. Cuckovic scored for 3:6. However, Montenegro missed a lot of chances with a man up and ran out of gas, playing with only nine players. They couldn’t catch up with the Greeks, which jumped to an 8:3 lead in the middle of the quarter and everything was decided. In the 30th minute, Genidounias scored his fifth goal to increase the margin to six (9:3). In the remaining time, both sides scored a goal each.