Spain and Netherlands tie, wins for Russia, Hungary and Greece

The big story on the second day of action in Netanya was of a thrilling but low scoring match-up between two of Europe’s top nations; Spain and Netherlands. The two shared a point after a very entertaining 5-5 draw.

Elsewhere, the hosts Israel were in spectacular goal scoring form to keep their 100% record in the competition after defeating Argentina by 16 goals to 6.

France gained their first points of the competition with a well-earned win over South Africa.

Italy put Germany to the sword in the penultimate game of the day, thanks to a six goal haul from Dafne Battini. Germany’s only goal came via Sinia Plotz, twenty-six seconds from half-time.

In the most exciting game of the day, Spain held the Netherlands to a a 5-5 draw in an incredibly low scoring, but exciting affair. The Dutch scored first via Nina Thera Ten Broek with a minute to go in the second period, after a goalless first quarter. Noa De Vries and Laura Schinkel both converted penalties in the third before Lola Moolhuijzen put the Dutch in the driving seat, but two goals from Elena Ruiz and an extra-player conversion in the last minute from Elena Camarena earnt her side a point. 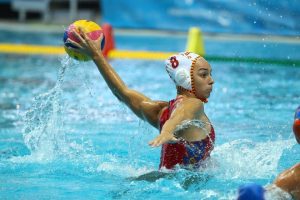 In the other game in the group, France ran out deserved winners against South Africa. Goals from Juliette Dhalluin, Camelia Bouloukbachi and rising star Ema Vernoux sealed an important win for the French,

Israel once again entertained hundreds of their fans inside the Wingate Institute with an inspired performance against Argentina. Maria Mia Bogachenko scored 6 of their 16 goals in the game. Israel are now almost certain to finish top of the group, meaning they have automatically booked their place in the quarter finals.

In the other game, Serbia beat a spirited Peruvian side by 17 goals to 6. Palilula’s Ana Milicevic bagged herself an impressive 5 goals.

Hungary did the business against Brazil as their UVSE duo, Panni Szegedi and Kinga Peresztegi-Nagy, both led the line for the Hungarians. Vanda Baksa, newly of Arizona State University, also made a stellar contribution, with four goals.

Russia enjoyed a glut of goals in their match with Uzbekistan. Yulia Lapteva and Anastasia Panfilova scored four each, and there were hat-tricks for Ekaterina Zashmarina, Daria Bunakova, Regina Galimzianova and Tatiana Cherkasova.