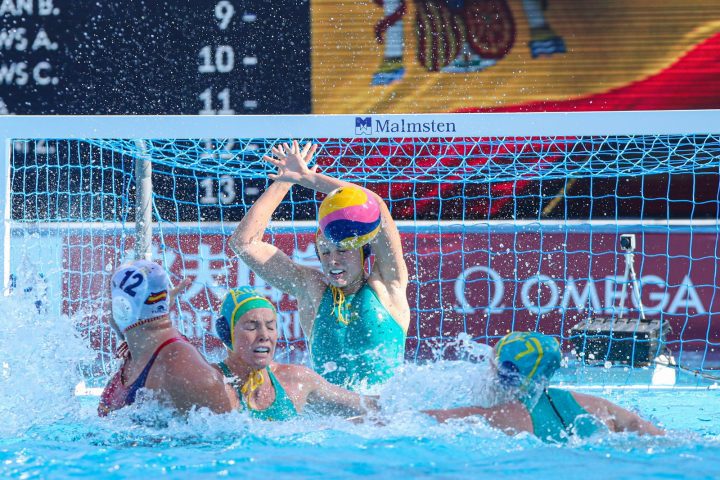 Spain beat Australia today to secure fifth place at the World Championships. The Spanish were clinical today, with some really silky attacking moves.

Both of Spain’s centre-forwards (Leiton and Garcia) were really sharp, with both securing a number of exclusions, and scoring two goals each. Elena Ruiz also scored twice, as she once again stepped up for her national team.

A big problem for the Aussies today was putting the ball into the back of the net – it seemed to be down to a mix of poor decision-making and a good defence from Spain. Australia’s keeper, Gabi Palm, once again had a special game, saving two penalties.

Sixth is not a bad result for the Aussie Stingers. They have a young team, newly refreshed after the Tokyo Olympic cycle, and a new coach. The group of players Paul Oberman has at his disposal is yet to reach their full potential.

There was very little to separate the two sides in the pool after eight minutes, but Spain came away with a 2-0 lead. While Australia put early pressure on the Spaniards, they couldn’t find an opening. Zoe Arancini, the Stinger captain, came the closest for her side, calling Laura Ester to make a great diving save.

After five minutes the deadlock was still to be broken, but Paula Leiton changed that with a powerful backshot off a neat and tidy entry pass from Anni Espar.

Ninety seconds later, Spain doubled their advantage with a swift set-play. Hayley Ballesty, who plays her water polo in Spain, was excluded, and Elena Ruiz ploughed the ball home to the bottom left corner. VAR later came to Australia’s rescue, as a scramble on the line nearly embarrassed the onrushing Gabi Palm.

But if Palm looked uncertain, she was immediately back to her best, saving a penalty within the first attack of the second quarter. Espar’s penalty was not bad, but Palm – who saved a penalty against Greece in the Classification Semi-finals, once again made an important save for her team.

The rest of the second period was not particularly exciting. Both sides hit the post (Forca once and Arancini twice). Australia were knocking on the door with shots from Abby Andrews and Bronte Halligan. Only an acrobatic save from Gabi Palm in the Stinger net prevented Ruiz her second of the game.

But with a minute to go in the third, Ruiz did have her second in the match. On the right, she fake menacingly, before dispatching into the top-right hand corner of the stinger goal.

Without doing too much wrong, certainly in defence, Australia found themselves three goals down, and with that, Bronte Halligan took it upon herself to lift her side, opening the Aussie account on the scoreboard with a beautiful shot off the post and in.

While Australia added their second goal in the match through an Abby Andrews 6m foul, Spain turned up the heat and showed supreme quality. Maica Garcia rampaged at centre-forward, earning many exclusions – and that is where she netted her first of the game, when her Sabadell team mate, Forca Ariza, picked her out on the post.

Paula Leiton was also playing with confidence. She first finished off a really splendid team move on the back post from a Bea Ortiz pass. Leiton then tried to return the favour for Ortiz, by giving her a penalty that she could find the cross-bar with.

While Spain seemed to be coasting in the match, the Aussies closed the gap into the fourth quarter, with scores from Tilly Kearns on the post, Amy Ridge from distance and Zoe Arancini with a clever finish on the left.

But when you give Judith Forca time and space to walk in on goal, invariably there is only ever going to be one outcome, as Spain’s best left-hander restored her team’s two goal buffer.

Once again, Gabi Palm saved another penalty for the Spanish, bailing out Tilly Kearns who was the guilty culprit. But when Bridget Leeson-Smith was excluded on the counter-defence, Maica Garcia linked up well once again with Judith Forca for an easy tap in, and the game.

Miki Oca (Spain) – “They were a good team, a strong team, with a very strong defence. We have five goals only in defence, and that is very good for us. Now we will have a little bit of rest, and then after we start again. In two months we have the European Championships. We want to be in the Semi-finals. What is important is when you get out of the medals, that you keep on fighting, to keep on going, and we did that. We are not satisfied with this result, but we get up after losing the quarter-final.”

Paul Oberman (Australia) – “Lets say we didn’t have our best shooting game. Plenty of chances, but we didn’t convert. But this has been a great experience for the girls, really good learning. We had three good hard games to finish. We played a good first week at the tournament, and I am still proud of how we played in the second week”

Anni Espar (Spain) – “After the loss in the quarter-finals, we knew we had to get the fifth place, so this goal is achieved. But our goal was getting the medals, and we didn’t accomplish that. But we are a group of young girls, we need to have more time together, to work better, and obviously get in the medals next time.

Tilly Kearns (Australia) – “We trained against Spain for a whole week. We knew what they were going to offer, we knew their strengths and weaknesses. We were a little flat, a little tired, still getting over that quarter-final defeat. But we weren’t putting our shots away, and we weren’t as aggressive as we should have been in attack. We have a young team, a solid team that really anyone in our team can step up to the plate and deliver. Its really exciting for the future, not just this cycle, but all the cycles to come, so its all very positive.”