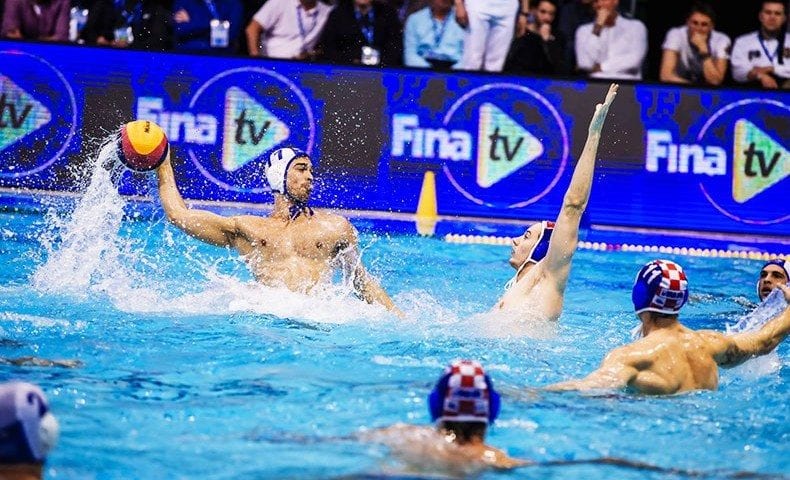 Spain produced the biggest upset of the season so far as they stunned the Olympic title holder Serbian team with a convincing performance in the quarter-finals of the World League Europa Cup finals in Zagreb. The Spaniards are to meet host Croatia which downed Greece in the second half. The other semi-final will feature a golden oldie with Hungary and Italy. The Magyars managed to take some revenge against their nemesis Montenegro while Italy had to come back from 6-8 down against the Russians but a 5-0 rush put them back on track.

The opening day was right away the most crucial one at the FINA/LEN World League Europa Cup as for four teams the ‘beneficial part’ of the journey ended right here on Friday in the famous Mladost pool. The losers in the quarter-final couldn’t dream on grabbing the first Olympic berth on offer – only the winners kept the chance to fight on for a place in the Tokyo tourney (except for the Serbs, as the hosts of the Super Final in June).

In the first battle, Hungary and Montenegro put up a brilliant fight. The Hungarians took control towards the end of the first period with a quick double and soon enjoyed a three-goal lead but their rivals came back and trailed by one at half-time and before the third period (7-6) too. Still, the equalizer never came and at 8-6 the outcome was virtually decided when Vladan Spaic punched his defender and referees immediately threw him out with a 4min suspension for brutality. Playing 6 on 5 for four minutes with 5:20 to go secured the Magyars’ win who staged a 3-0 rush during this period.

Next came the re-match of last year’s European Championship final between Spain and Serbia. Back then the Serbs edged out their rivals in a penalty shootout but this time the favorites fell to the Spaniards who offered a sparkling display of attacking water polo while the Serbian players struggled in the back and also with adapting to the new rules. Still, after being four goals down at 13-9 with 5:46 to go, the Olympic title-holder had a late surge and after 13-12 they had four shots in two possessions to save the game to a shootout but this time luck wasn’t on their side.

Italy had fond memories from Barcelona when they trounced the Russians 11-1 in the Europeans quarters – however, this time it was a totally different ballgame. The Italians lacked the edge for a while and even if they led 6-4 late in the second period, deep into the third they looked a bit hopeless as Russia went 6-8 up. However, the Russians faded in the fourth, couldn’t score for 10:29 minutes and during that phase, the Settebello netted five goals to win the game.

In the fourth match Greece kept up for a while against Croatia, it was tied after two periods but the host side managed to take the upper hand in the third as they jumped to a three-goal lead and never looked back.

Since Serbia enjoys a guaranteed place in the Super Final as the host, only the winners of the Saturday semis will secure their SF berths while the bronze medal match on Sunday shall be a heated battle for the last spot.

In the first game the Hungarians faced their nemesis: apart from beating Montenegro in the 2013 World Championship final, they have been on the losing streak at the majors ever since, including a painful QF defeat at the Rio Olympics, two SF defeats at Europeans and a shootout loss in last year’s World League final at home in Budapest.

The Montenegrins opened the scoring though they could net only one goal in their first three man-ups while the Magyars immediately equalized from their first one. Soon a fine center-shot from Balazs Harai put them ahead and even though Aleksandar Ivovic leveled the score again, two extra-man goals in the last 76 seconds gave the Hungarians a 4-2 lead. Soon they went 5-2 and 6-3 up but in the second quarter, Montenegro had the better finish, this time they netted two extras in 25 seconds.

They couldn’t go to even, though, as they missed four more 6 on 5s early in the third – Viktor Nagy came up with some big saves – and Denes Varga’s brilliant shot reset Hungary’s two-goal lead. It didn’t last long as Duro Radovic put away a 6 on 4 for 7-6. Since their rivals wasted two man-ups in the same possession, plenty of excitements were in sight for the closing period.

Denes Varga netted his third from an extra for 8-6 early in the fourth, then after some ‘field-work’, a sudden move closed down the game prematurely. Vladan Spaic punched his defender deliberately while swimming back, the referees noticed it and immediately called the 4-minute expulsion for brutality. Though Gergo Zalanki’s penalty was stopped by Dejan Lazovic that slim hope faded soon.

Playing permanently with a man less, the Montenegrins faced an uphill battle they couldn’t win. The Magyars played with a cool head, scored three more goals and secured their place in the semi-finals.

The second game offered an outstanding fixture: the rematch of last year’s European Championship final. In that game, the title-holder Serbs were forced to a penalty shootout by the host Spaniards who came up with an electrifying performance. Still, Serbia clinched that title and was also considered the favorites here.

However, they didn’t seem as sharp and powerful as in the past seasons when they had claimed seven straight titles at major events. Though as the host of the Super Final they have a guaranteed berth, and that might have had an effect on their appetite here – still, the Spaniards’ dominance from the second period was unusually strong.

The first period offered action-packed eight minutes, the Serbs led 1-2 but the Spaniards netted three connecting goals and from 4-2 they started controlling the game. Though their opponents came back twice to one goal but with a double in 39 seconds they jumped to an 8-5 lead at halftime.

Dusan Mandic pulled one back early in the third but then came a man-up goal and a penalty and Spain led 10-6. Serbia was in trouble but netted quick and fine action goals and had a man-up to reduce the gap to one but missed it. It was a decisive moment as the next Spanish possession ended in another penalty – the new rule was applied that an attacker’s arm cannot be hit from the back even if he holds the ball – and Spain reset the three-goal cushion (Alberto Munarriz was 4/4 from the 5m line). Filip Filipovic’s blast found the back of the net with 22sec to go, but Spain was still 11-9 ahead before the last break.

And the beginning of the fourth showed the difference: the Spaniards buried their first man-up while the Serbs missed two, then Blai Mallarach let the ball fly from 6m to hit the top corner. With 5:46 to go at 13-9 it seemed it was over – but it wasn’t. At 13-10 the young Spanish Alvaro Granados chose a rather nonchalant finish in a one-on-one. That would have finished off the match, instead, the Serbs came back to 13-12 and had two possessions to save the game to a shootout. However, Andrija Prlainovic, who decided many big matches in the past, blasted the ball twice to Dani Lopez so Spain survived the late surge.

With the favorite Serbs falling, teams in the semis face some tough games as only the top three will make the Super Final.

Last July Italy thrashed the Russians in one of the most one-sided quarterfinals in the history of the European Championships. They won 11-1 and many thought that another easy one cruise was awaiting the Settebello.

Instead, they found themselves in the middle of a dogfight as the Russians stunned them with a superb performance. Italy took the lead twice but the Russians netted two for a lead and Zeno Bertoli just beat the buzzer (0.2sec remained) to equalize for 3-3 at the end of the first. Soon after Ivan Nagaev missed a one-on-one and that seemed to have been a costly mistake as the Italians jumped 6-4 up in a minute. Nagaev didn’t break down and pulled one back 12 seconds before the middle break.

Then in the third, the real misery started for the Italians. They missed three 6 on 5s in a row – Petr Fedotov was quite solid in the goal – and the Russians punished them heavily. Sergey Lisunov buried an extra, then Roman Shepelev netted an outstanding action goal and Nagaev added one more from a counter to go 6-8 ahead. Italy’s troubles would have got deeper but Daniil Merkulov’s lob from another counter landed on the post. Instead of +3, soon it was 7-8 as Gonzalo Echenique scored from a man-up.

And Italy came back to even quickly in the fourth with another man-up goal. In this phase, the Russians seemed to be running out of gas, missed an extra, then a clear center-shot and soon that hit back as Italy managed to regain the lead with 4:03 to go after a nice set-up goal from Nicholas Presciutti. They doubled the gap soon as Matteo also netted a 6 on 5 for 10-8, with 2:36 to go and there was no way back for the Russians. With Echenique’s the Italians completed a 5-0 rush while Ivan nice action goal came way too late, after a 10:29 minutes long draught in front – these two data determined the outcome.

Croatia Outpowers Greece in The Second Half

The fourth QF served up the expectations as well, Greece kept up with the world title-holder Croats for quite a while before they bowed to a better opponent.

Konstantinos Mourikis opened the scoring but Setka equalized from a fine counter. Then the Croats wasted four man-ups in a row – in fact it’s interesting to see that the Balkan teams struggle in the frame of the new rules since their most lethal weapon was destabilize the defenses by passing around and taking the killing shot in the 22-23rd second of the possession when the excluded player was still swimming back. With the possession time expiring parallel with the exclusion, this tool can no longer be used.

In the second period, the Greeks looked to have a better spell, took the lead four times but couldn’t hold it. Once the new approach helped them to earn a penalty – even if the center had his hand on the ball, he was fouled from the back – but then a silly mistake cost them the opportunity to double their lead, instead, they faced a man-down and the ensuing equaliser (while the used the flying exchange, their players forgot to touch hands which compulsory).

Whatever problems the Croats might have with the new rules, they found the right schemes in their man-ups and managed to bury three in succession in the third period. The Greeks struggled at the other end, needed 5:51 minutes before Alexandros Papanastasiou’s bouncing ball found the back of the net again. The Croats responded well with a fine one-timer from Loren Fatovic 0:07min from time so they turned into the last period with a comfortable 7-10 lead.

With a fast counter, they went 7-11 up and from that they just had to maintain the gap carefully. Though after 8-12 the Greeks came back to 10-12 with 2:00 minutes remaining – the Croats missed a penalty in the meantime – but Javier Garcia’s great blast blew away the last hopes of the Greeks in a game bringing 39 major fouls, nine players were fouled out, perhaps a bit more than expected when neither sides played with extreme toughness.