Spain too strong for Hungary; Stingers brush aside New Zealand 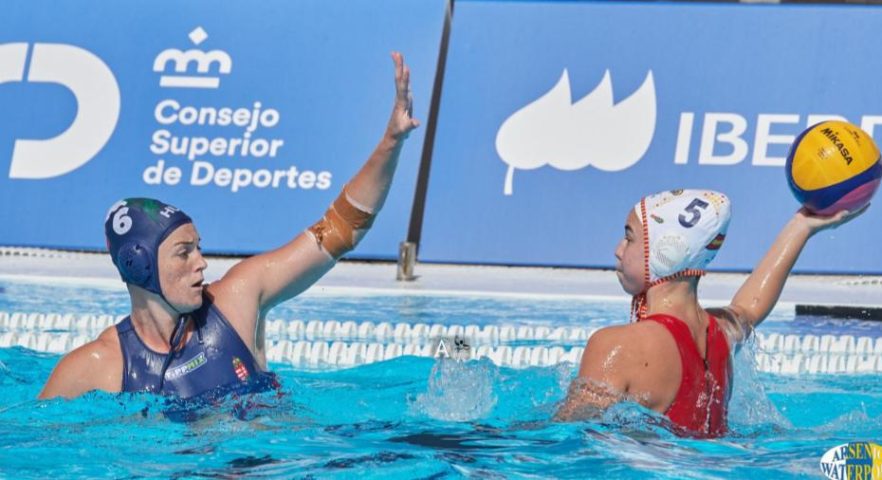 Spain and Australia both secured reasonably comfortable victories in Group B at the World League Super Finals in Santa Cruz de Tenerife this afternoon.

In the last game of the day, the hosts Spain, overcame Hungary 15-11. Miki Oca’s team didn’t reinvent the wheel, but could call upon the experience and quality of in-form players such as Bea Ortiz, Anni Espar, and Maica Garcia to lead the way.

In the earlier game in Group B, Australia never looked like losing to their local rivals New Zealand, running-out 14-5 winners, with Bronte Halligan netting six times in that clash.

Spain face the Stingers tomorrow, while Hungary will face up to a winless New Zealand.

Read the report of the earlier games in Group A between United States 11- 5 Canada, and Netherlands 18-17 Italy.

Spain produced an all round impressive performance to overcome Hungary and top Group A. The European champions looked really good in the advanced positions today and frustrated Hungary in defence.

There were some noticeably strong individual performances from the Spanish, with Bea Ortiz finding four more goals, and Anni Espar (2) and Elena Ruiz (2) hitting excellent shots from off the top.

Hungary started the game with good intensity and a physicality that might have troubled the Spanish, but once Spain had netted four goals in a row in the second quarter, Hungary lost their footing, and a bit of belief. 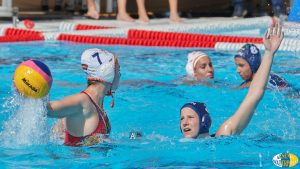 Spain have essentially secured the top spot in Group A, and the pressure will be off tomorrow against the Stingers. They have looked pretty good so far this week, with a consistent level of performance, and will hope they can take that momentum into their semi-final, which will most likely be against the Netherlands.

Hungary won’t be too disappointed with their performance today. Resting Greta Gurisatti and Dora Leimeter seemed to indicate that Attila Biro considered this game to be a free-hit. With the bigger picture in mind, the loss will likely not affect Hungary’s status as a semi-finalist, but with Spain topping the group, a semi-final with the United States beckons.

Despite a tentative start from the Spaniards, they ended the quarter with a 3-2 advantage. Rebecca Parkes netted the first goal of the game for the Hungarians after she and Rita Keszthelyi were left completely unmarked in Spain’s half for a 2 on 1 counter-attack score.

Spain took the lead though with two powerful strikes from Bea Ortiz and Anni Espar, either side of the perimeter. Judith Forca made it three with a mighty effort into the top right-hand corner of Alda Magyari’s goal. Rita Keszthelyi’s driven shot ensured the difference at the break was only a single score. 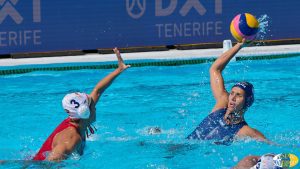 Into the second, Spain took control of the game with three excellent strikes: Maica Garcia moved well from the post to pop out and fire past Magyari, Anni Espar was picked out well by Paula Leiton for a simple close-range finish, and Bea Ortiz, with so much class, rocketed the ball into the roof of the net on the buzzer.

Kamilla Farago netted two similar scores from the left wing, deceiving the Spanish defence on both occasions, but a double from the unstoppable Bea Ortiz, and a second goal of the game for Anni Espar put the Spanish 9-4 up at the turnaround.

An impressive conversion by Panna Pocze and a third goal for Kamilla Farago gave Hungary a bit of spirit early in the third period. But a double from Elena Ruiz on the right-hand side, and strikes on either wing from Nona Perez and Irene Gonzalez meant Spain was holding all the cards going into the last. 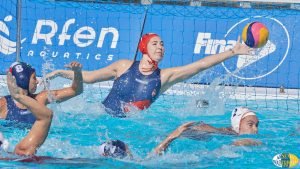 Spain seemed to have settled for the victory in the last eight minutes and were happy to run down the clock. They gave away a few more exclusions than might have been expected, and Krisztina Garda and Zsuszanna Mate both took advantage of that. Kata Hajdu, the youngest player at the tournament, scored a wonderful shot, taking the Magyars to double figures (14-10).

But Spain netted twice in the last period, first via Judith Forca, before Paula Leiton found the back of the net inside her own half, beating the young Boglarka Neszmely in the Hungarian goal with a second left on the clock.

Bronte Halligan led the scoring for Australia with six goals, while there were braces for Ruby Swadling, Amy Ridge, and Tilly Kearns.

There was a bit of a gulf in class, but Australia still made sure they were doing the right things. They were stronger in the tackle, limiting New Zealand to very few chances, and with the attacking options at their disposal, the Stingers were able to find the goals they needed with style.

New Zealand had moments of brilliance, putting away some tidy finishes. But like yesterday against Spain, they couldn’t maintain that level for any sustained period of time.

The Stingers now have a chance of making the semi-finals if they can somehow defeat the hosts Spain, while New Zealand will face Hungary tomorrow, before bidding to finish as high as they can in the classification matches. 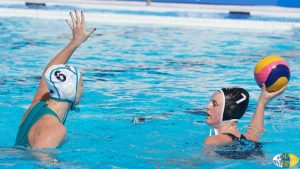 The Stingers enjoyed a comfortable start to the match against their continental counterparts, taking a 5-0 lead. At first, the Aussies could only net from the 5m penalty mark, with two Italian-based players, Bronte Halligan and Abby Andrews, hitting the target.

A driven shot from Hayley Ballesty, a backshot from Tilly Kearns, and Ruby Swadling’s near-side conversion made it 5-0 before the break. 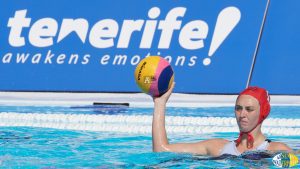 Emmerson Houghton got New Zealand off to mark in an improved second quarter for the Kiwis. Millie Quin doubled New Zealand’s tally with a solid finish on a timeout set play. But a second quarter hat trick for Bronte Halligan clipped the Kiwis’ wings for an 8-2 halftime scoreline.

In the third period, nothing changed in terms of the rhythm of the game: Australia found the net four times; VAR helped rule that Tilly Kearns’ shot had crossed the line; Amy Ridge hit one from 7 m; and Bronte Halligan turned the ball over to convert on the break. Swadling grabbed her second. For New Zealand, Millie Quin’s near-side shot beat Genevieve Longman for pace, while there was an excellent strike from the centre forward position by Emily Nicholson. 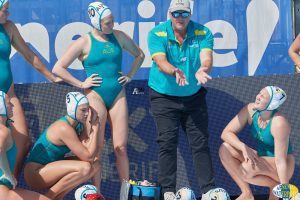 While Gabrielle Milicich scored a nice man-up conversion on the right for New Zealand early in the last quarter, a score from Amy Ridge and Bronte Halligan’s sixth of the day wrapped the game up nicely for the Stingers.