The fifth day in Netanya did not disappoint as we have our four semi-finalists: Greece, Hungary, Italy and Spain.

Hungary came from behind to secure a huge win against the Dutch – they will face Greece in their Semi-Final after Alexia Anna Kammenou’s side demolished Serbia. On the other side, Spain have defeated the double reigning champions, Russia, in a match of high quality, while the Italians broke Israeli hearts to reach their first U20 World Championship semi final.

Two South America sides, Brazil and Argentina, will battle it out tomorrow in an exciting derby to determine who will finish 9th and 10th. Other local rivals, France and Germany, will also fight for 11th and 12th classification tomorrow.

In the lower-ranking play-off matches, Uzbekistan have finished 13th after beating South Africa 12-9, while Slovakia, who finish 15th, ensured Peru would return to South America winless from their 5 games after beating them 15-7.

Hungary had to come from behind twice in the last quarter to beat the Netherlands in a game for the ages. The Dutch started the better side, with Moolhuijzen, De Vries, Ten Broek, Schinkel and Meijer putting the Oranges ahead. But Hungary clawed their way back into the game in the second, in a large part thanks to the hat-trick of Kamilla Valentin. Another goal for Valentin in an extra-player situation followed by a goal from Kinga Peresztegi-Nagy put the Hungarians back on a parity. However, Evangelos Doudesis’s Dutch side would not easily give away their chance to make the final, as they did two years ago in Funchal. Nikki Meijer and Lola Moolhuijzen both put away key shots to put all the pressure on Hungary. But again, Hungary pulled through, firstly through two Baksa Vanda goals, before their player of the match, Kamilla Valentin, got her fifth of the day, sending her side through to their first U20 women’s semi-final since 2011. 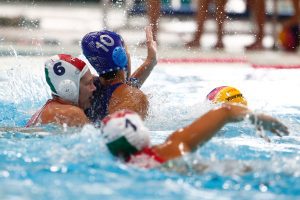 Russian hopes of a third U20 World Championship title in a row were dashed by a hugely impressive and clinical display from Spain. Jordi Vall’s side are in the Semi-Final of this competition since 2015, and will be the favourites to secure what would only be their second ever title.

While the first quarter of the match was level with goals from Elena Ruiz, Gisel-La Farre and Paula Camus for Spain, and goals for Daria Chagochkina and Anastasia Panfilova for Russia, Spain put in a massive shift in the second period to score three unanswered goals. The first came from Paula Camus, the second from a man up by Ariadne Ruiz, and the third, 12 seconds from time, from Paula Prats Rodri. Two Aleksandra Bogdanova goals in the third kept the reigning champions in the contest, but more goals from Elena Ruiz, Paula Camus and an important finish from Nona Perez put Spain through to a Semi-Final against Italy.

The Israeli fairy-tale at their home games was ended by an impressive Italian outfit as Italy have now progressed to their first ever women’s U20 World Championship semi-final. Italy got off to a decent start, with Sara Cordovani finding the back of the net twice in the opening two minutes . Further Italian scores by Morena Leone and Sofia Guistini later in the quarter gave their side a deserved lead. Israel’s two goals from in the quarter were courtesy of Maria Bogachenko, who was keeping her side in the contest

Dafne Bettini then added two goals to her impressive tournament tally as Leone added her second of the game, to kep Italy ticking over at half-time. Bettini then couldn’t help herself but to fire home two more in the third period from an extra-player situation and a penalty to give the Italians one foot in the semi-final. Then, in the last quarter, Sofia Guistini made it 5 for her in the match, scoring a fourth quarter hat-trick to send her side through to the semi-final. 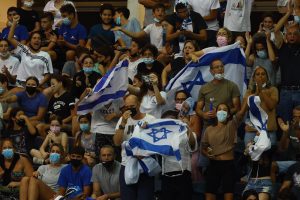 Greece were the first team through to the semi-finals in the first quarter-final after a comprehensive victory over Serbia. The Greeks stormed to a 6-1 lead after the first period thanks to three goals from Ioulia Kontoni, and supplementary scores from Effrosyni Katsimpri and Maria Myriokefalitaki. Serbia showed some character to keep the game somewhat competitive in quarters two and three, but ultimately Greece never looked like losing. An outstanding last quarter, capped by two finishes from Eirini Ninou, booked Greece’s place in the semi-final against Hungary tomorrow.

It took a tense and nervy penalty shoot out to separate Brazil and France after an epic contest during the 32 minute regulation time. In a goal-scoring frenzy, France’s Ema Vernoux bagged 9 goals, while her teammate Juliette Dhalluin scored 5. Brazil, however, also had some sharp-shooters of their own with Leticia Belorio, their captain, netting 7 times, and Rebecca Helena Moreira converting 5!

France looked  to be in control of the game, having maintained a four goal lead after the first and second quarters. However, goals from Belorio, Cavalcante, Ferreira and Santos brought them right back into the game going into the last. Two Belorio goals in the last three minutes, followed by a last-gasp goal from Brazil six seconds from time by Rebecca Morreira took the game to penalties.

Belorio, one of the competitions best scorers, missed her first penalty in the shootout, as did another of the competitions big shooters, Juliette Dhalluin. But at the second time of asking, Belorio put her penalty away – something that Dhalluin yet again could not do. Her agonizing and unfortunate miss means her side will play for 11th place tomorrow.

In a totally contrasting, but an equally as entertaining 9th-12th Semi-Final, Argentina held off a resurgent German side which means they will compete for 9th place tomorrow against Brazil. The South American’s looked the brighter in the first period thanks to two extra-player conversions from Florencia D’Onofrio and Ludmilla Ianni. However, Germany hit back with a score from Anne Rieck and two goals from Jamie Julique Haas. With the scores level, Argentina then took a two goal advantage going into the last period, but Germany once again came back and equalised through Elena Ludwig. Germany then had a wonderful chance to win the game when Florencia D’Onofrio gave away a penalty with three minutes to go, but Emma Koch’s penalty shot only found the post of Lola Canales’ goal. Then, in a final twist, Argentina won the match off Lucia Ruiz’s man-up goal 90 seconds from the end of play.

Slovakia have finished the tournament in 15th place after a solid display against Peru. The Peruvians could not recover from a nightmare first quarter, despite a spirited performance that saw Rebeca Rodriguez Pinto score 5 goals in the match. Slovakia took a commanding lead in the first period thanks to scores from Katarina Grezdova, Anastasija Halocka, Nela Mesterova, Katarina Kozakova and Monika Sedlakova. Peru, however, twice cut the margin to four goals in the third and fourth quarters, but four unanswered conversions in a row for Slovakia (Sedlakova 2, Halocka & Kiernoszova) saw them over the line to finish 15th in the tournament. Peru have finished last, without registering a win in the competition.

Uzbekistan just had enough in the tank to hold out against South Africa in the 13th-14th play off. The game was a tight affair into the second quarter, when two goals from Ugiloy Abdulkhaeva, as well as scores from Madinabonu Shermatova, Yana Drozdova and Valeriya Muratova put the Uzbeks ahead by four. The momentum swung in South Africa’s favour when their Olympians, Yanah Gerber and Jordan Wedderburn (2), scored to bring them within two at 8-10. But the African’s couldn’t quite complete the comeback as Nino Gavashelashvili and Madinabonu Shermatova sealed the win in the last period.