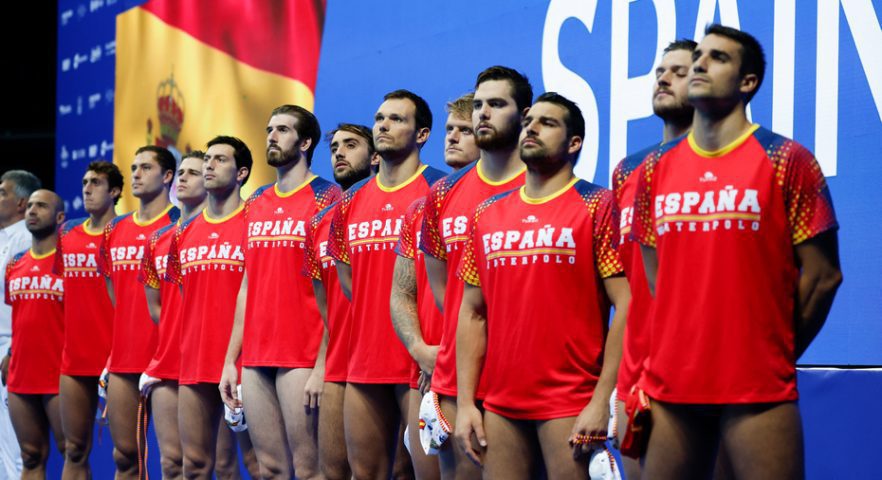 Spain finished a very successful season with the third medal. After the gold at the World Championships and bronze in the World League, the world champions took bronze at the European Championships in Split.

The Spaniards beat Italy in a low-scoring third-place match 7:6.

Even before the final, it was clear that a winner would become the most decorated male national water polo team this summer. Only Italy and Spain won the medals at both previous competitions in a packed 2022 summer. Spain beat Italy in the World Championships final. Italy won the World League, while Spain took bronze.

In the beginning, the teams exchanged goals quickly. Famera converted a man-up, but immediately after a penalty was awarded to Italy. Dolce sent the ball into the net from the 5m line for 1:1. In the following minutes, the defenses were very tight. In the middle of the quarter, Bustos was in the right place and found the net after a rebound. Barroso made it 3:1 with 18 seconds left in the first period. There were no action goals in the first period, Spain scored three with a power play advantage, and Italy one from a penalty.

The game followed the same pattern after the first break. It was challenging for attackers to find “holes” in the opponent’s defense.

But, Italy handled better in the second quarter. Italy’s leftie Luca Damonte was the author of the first action goal in the match. In the middle of the second, he netted from a nice lob for 2:3. He hit the post, but the ball deflected to the net. Cannella scored from a 6 on 5 to level at 3:3 in the 16th minute and the teams were at a new beginning. 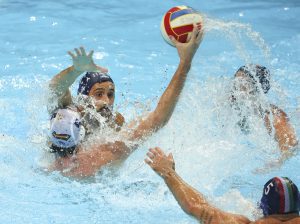 Spain’s goalless phase lasted for 10 minutes. It was broken by Marc Larumbe, who found the net from the deep left and Spain went to 4:3. That was one more power-play goal.

Less than a half minute later, Spain earned another man-up. After a nice action, Alvaro Granados scored from a close-range shot to make it 5:3. Until the end of this period, each team scored a power-play goal apiece and Spain kept a 2-goal advantage.

Italy’s leader Francesco Di Fulvio opened the final quarter with a goal from a penalty shot and halved the distance to 5:6.Then Spain missed a great chance. Roger Tahull hit the post with a man-up, but the ball went to him. Del Lungo saved his shot, but Tahull got the ball for the third time, and Del Lungo saved again. The Spaniards paid for this missed chance. Italy earned a man-up at the other end of the pool. Bruni scored for 6:6.

Three minutes and 19 seconds before the final buzzer, Spain, finally scored an action goal. The Spaniards missed a chance with a man-up, but they kept the possession, and Perrone fired the ball from a distance -7:6. 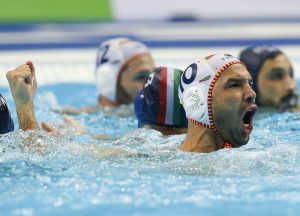 It turned out that it was a winner and the last goal in the game, while the end of the contest was Italy’s last attack. Francesco Di Fulvio had his shot blocked with 28 seconds left on the clock. The Spaniards kept the ball after that and could start celebrating the new medal.

Both goalkeepers did a good job. Aguirre posted 11, and Del Lungo had 9 saves. Extra player conversion was – Spain 6/13 and Italy 2/7.

Felipe Perrone, Spain’s legend and scorer of the decisive goal:

“I am proud of all we achieved this summer. At the start of the preparations, we didn’t think about winning medals at all three competitions. But, our philosophy is always the same – we give out maximum at each piece of training and each game. Sometimes we win, and sometimes we lose. This year, we clinched three medals . As for the bronze-medal game, we all expected the game like this. Italy and Spain always play such matches. Both teams play fast water polo. Tiny details are usually decisive This time we won and can be very happy at the end of the summer.

We didn’t play how we could, not only today but during the whole tournament in Split. Now, we all need a holiday and after that, I believe we will come back stronger. The crucial factor in the bronze-medal match was our man-up conversion. We didn’t play well with an extra man, but we caught up with Spain in the fourth quarter. However, then came Felipe Perrone’s goal, which was a crucial moment of the match.