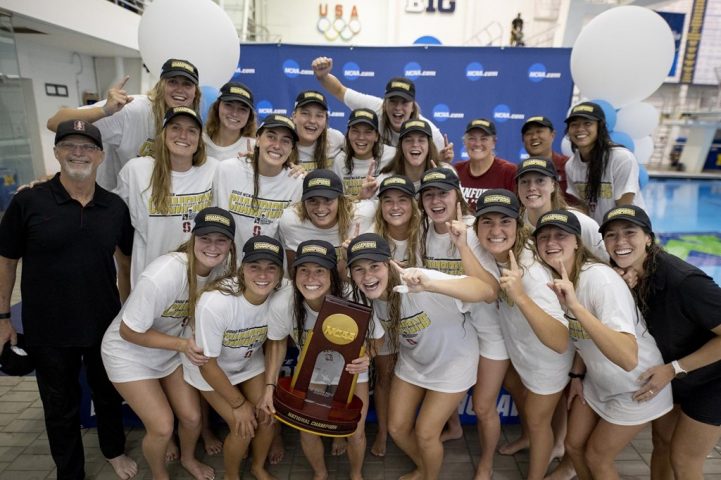 Stanford Cardinal have won the Women’s NCAA title for a historic eighth time after toppling the reigning champions USC with a 10-7 victory in the final at the Donald B. Canham Natatorium in Ann Arbor, Michigan.

Lead by John Tanner, the Cardinal now stand in their own right as the NCAA’s most successful University, with 8 titles. While they missed out on the final last season, Stanford reached all 10 of the previous finals – with that statistic now equating to 11 NCAA gold-medal matches in 12 seasons.

The game itself was a fascinating spectacle, with USC leading for the whole first half of the match. A cagey third quarter saw Stanford take the lead for the first time, before three goals in as many minutes at the end of the fourth saw Stanford take home the win in Ann Arbor.

In her last game for the Cardinal, Makenzie Fischer went out with a bang – netting four goals in the game, two of which were in the all-important 4th period. Ryan Neushul netted a hat-trick of goals, while Aria Fischer supplied her team with a trio of assists. Those three have been so pivotal to Stanford, particularly this season, and really showed their worth on the biggest stage. Aria Fischer will return for her last year next season, while Neushul will remain an important player for Stanford for the next two years.

Mireia Guiral, the young Spaniard, had a particularly good match for USC, scoring the first two goals her side (one of which marked her 100th goal for the Trojans) and chipping in with couple of assists. Tilly Kearns had an impactful last quarter with two goals, while Carolyne Stern had a solid game in the USC net with a number of quality saves.

USC narrowly came out on top from the first eight minutes. The opening score went the way of the Trojans via Mireia Guiral – with a powerful bounce shot into the roof of the Stanford net.

Makenzie Fischer equalized not long after from a penalty after great work at center from her sister, Aria.

However, Guiral added her second of the game not long after, before USA international, Paige Hauschild, gave her side a two-goal cushion. Only a well-worked extra-player move, finished cleverly by Chloe Harbilas on the post pulled Stanford back within a single score going into the second quarter.

The second period saw both defenses tighten up, which saw the deadlock broken only twice in the period. Paige Hauschild grabbed a second goal, to once more give USC a two goal lead – in transition, Hauschild drove hard through the middle, and a lapse in concentration allowed a long ball from Bayley Weber to reach Hauschild – who was never going to miss.

But again, Stanford stayed focus and pushed to get get back on a parity. Aria Fischer forced an excellent reaction save from Carolyne Stern from close range to keep USC 4-2 up, but Stern could do nothing to prevent Ryann Neushul’s first goal of the match. The ball was fizzed out to Aria Fischer on the left-hand side, and with a measured loop past to the back post, Neushul finished well.

Into the third, Stanford took the lead for the first time in the game. After Makenzie Fischer’s equalizer within the first three attacks in the period, Ryann Neushul gave her side a 5-4 lead off the extra-player situation.

Tilly Kearns made her impression felt into the 4th with a backshot of the highest quality, before grabbing another goal a few minutes later to cancel out a Makenzie Fischer’s cross-face score, to put the score at 7-7.

Stanford pressed on for the win hard, but a quite outstanding block on the goal line by Bayley Weber from Chloe Harbilas’ close-range effort may have looked to swing the momentum.

However, Stanford were focused on the prize going into the last three minutes. Carolyne Stern should have probably done better from Jewel Roemer’s effort from range around the block that the USC keeper misjudged, before a quick counter by Stanford, initially defended well by USC, eventually led to a suckerpunch goal – having carried the ball a long way, Makenzie Fischer turned and fired into the near corner of the USC goal, giving Stanford a 9-7 lead.

Stanford then had all the momentum going into the last moments, as Stanford’s keeper, Maya Avital, remarkably denied Grace Tehaney by tipping her shot onto the post.

Wearing down every USC attack, and running down the clock, Stanford knew a long time before Ryann Neushul’s third goal with 20 seconds to go in the game that they had secured a historic 8th NCAA title.