Former World Champion and Olympic Silver Medallist, Antigoni Roumpesi, has left her post as Head Coach of Ethnikos Piraeus by mutual consent, while the club has already named Stefanos Leandros as her successor.

The 38-year-old Roumpesi, who guided the Blue and Whites to LEN Trophy glory this season, is leaving due to personal reasons, according to an official club statement. Many at the club cite Ethnikos’s now former coach as a big reason for their development in the last season.

Ethnikos’ technical director, Dimitris Kolovos, has expressed his thanks for Roumpesi and described her as a ‘jewel of Greek sport and water polo’. His full statement is below:

‘”Representing the whole family of the historic Ethnikos Piraeus, but also personally, I want to say a huge thank you to Antigone Roumpesi for everything she did for the team we love last season. A jewel woman for Greek sports and water polo who shone with her presence and with her we won the European trophy. I will never forget what we went through together and I say it and I mean it, whenever and if the “blue and white” hug decides it will always be open for her. Together we cried and laughed at the LEN TROPHY grand final and together we celebrated the European title. Memories that I will never forget. Antigoni Roumpesi, thank you and thank you personally for everything. See you again!’

New beginnings for Leandros in Blue and White

The fact that Stefanos Leandros has been named almost immediately after Roumpesi’s departure suggests that the club knew about her plans to leave in advance, and that there was an element of planning before the appointment. As one of Europe’s top clubs, they no doubt could have had a pick of a number of quality candidates, but they have opted for their man – a vastly experienced and well respected Greek coach.

Leandros has a fairly solid CV, with notable experience including as the Greek assistant coach from 2011-2015 & 2018-2020. Having been heavily involved with the Greek national teams at junior and senior level, his understanding of the league will have been a big attraction for Ethnikos. 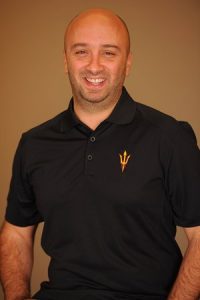 Ethnikos’ new coach has also had club level experience; with eight years at Triton Maroussi (2005-2013) in which he secured back to back promotions to the top division. In 2018, he was the top man at Hydraikos.

Perhaps Stefanos Leandros’ biggest stints in the women’s game was when he twice appointment as Head Coach of the University of Arizona Sun Devils, firstly for the 2013-2014 season, and most recently as last season.