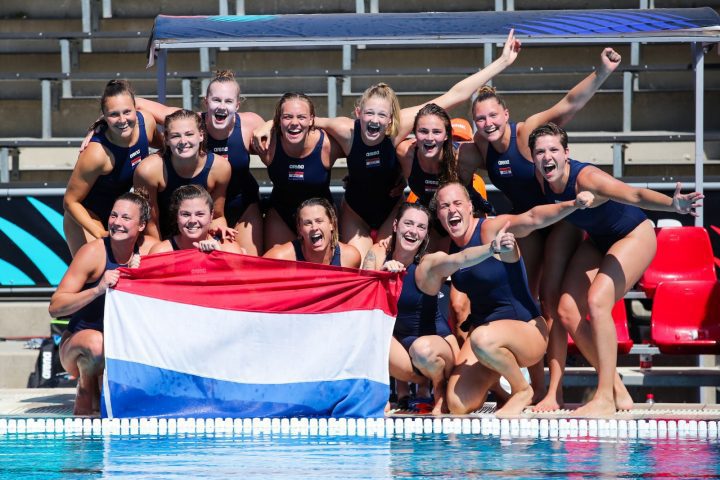 The Netherlands have won the Bronze medal in Budapest after an impressive defensive performance against Italy.

The Italians looked good in the first period, leading by two goals at half-time, but failing to score for the whole of the third period and much of the fourth was the undoing for the Italians, while the Dutch created opportunities thanks in part to the dogged work by their centre-forwards, Kitty Joustra and Vivian Sevenich.

What Eva Doudesis will be happiest with is the way his team stayed calm under pressure, and grinded down the opposition in the last two periods. There were seven different scorers for the Dutch (Sleeking, Van der Sloot, Van de Kraats, Sevenich, Joustra, Koolhaas and Ten Broek), further demonstrating the depth of reliable and quality players they have in their squad. 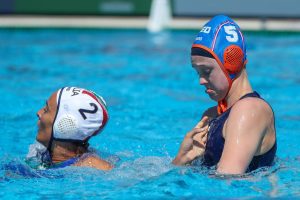 Laura Aarts made a number of good saves in the Oranges’ net, as did Banchelli for the Italians.

Carlo Silipo will be naturally disappointed, but they didn’t show enough in attack to win the game. At times his side seemed hesitant – something you can’t be at this stage of a World Championship Medal match.

In the first game of the day, Greece made sure they finished seventh at the World Championships with a comfortable victory over France.

Maria Myriokefalitaki was in inspired form, scoring five goals from centre-forward in the game, while nineteen year old Christina Siouti, who tomorrow travels to Israel for the U19 European Championships, bagged a brace.

For France, they know they are not yet ready in their journey of development to beat Greece, but they have secured a historic 8th place at the World Championships – which is a positive to take forward as they prepare for their home games at Paris in 2024.

The Setterosa came from behind to lead in the first quarter. Ilse Koolhaas put the Oranges ahead with a clever pop on the post. But when the Italian’s settled their nerves, they started to really threaten the Dutch. Silvia Avegno was in several times on the right, and that was how she equalized – with Laura Aarts only able to fist the ball low into her own net. 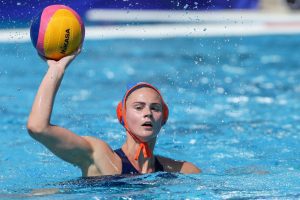 A rocket of a shot from 6m then put Carlo Silipo’s side in the lead,  as Claudia Marletta’s sniped shot clipped the post before nestling in the back of the net.

The Italians were clearly boosted by their goal lead after Q1, as they added two further goals, both from Sofia Giustini. The first was a piece of art on the extra-player move, while the second was a delicate lob.

The Dutch were being frustrated. Moolhuijzen, Sleeking and Van de Kraats were all denied by the Italian goalkeeper Caterina Banchelli. But what the Dutch were doing well was creating chances at centre-forward, and it was Kitty Joustra they had to thank for that, and the goal that made it 4-2. Banchelli seemed to palm the ball away from danger, but only as far as Joustra, who got her well-deserved goal for the Dutch. 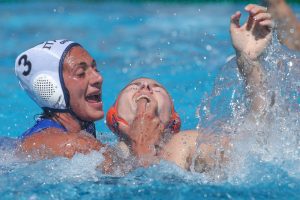 The Netherlands, as expected, came out with real intent in the third. But the Italians soaked up all the pressure well, putting their bodies on the line, and making the steals and turnovers at centre.

The Dutch did eventually find one their centre-forwards though, when Simone Van de Kraats fed her Mataro team mate, Vivian Sevenich, who tucked the ball just under the left-arm of Caterina Banchelli in the Italian goal.

For the rest of the quarter, Sevenich continued to haunt the Italian defence, as they became undisciplined. A double-exclusion from Tabani and Queirolo gave Moolhuijzen an easy assist for Van der Sloot to level the score at 4-4 before the final quarter.

And into the last, the Dutch really took full advantage of keeping the Italians goal-less in the third, as three excellent scores from the Dutch turned the game on its head.  Van de Kraats scored well from a man-up, Ten Broek then rifled a ball against the far post to giver her a two-goal lead for the first time. Brigitte Sleeking then showed her quality with a minute to go, with a bar and down shot to put the game to bed. 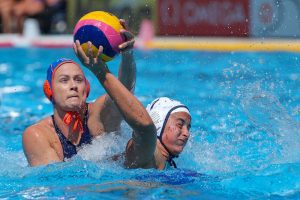 Eva Doudesis (Netherlands) – “we missed the first half, we gave them a lot of opportunities. In attack we were toom passive against their pressing. Later on, we had to invest more time in defence, to be more stable. We showed one thing, our biggest talent of this team is our character. It was not a bad tournament for us, we played some good games. The most important thing today is that we played a game that we weren’t good, and the team showed they have the mental resources and capabilities to win games like this.

Vivian Sevenich (Netherlands) – “Its crazy, I can’t believe it! It was such a tough game, Italy did such a good job in defence and made it really hard for us today. But we kept on fighting, and its really hard to beat a team that doesn’t give up, and today shows us for the team we are. I am really proud of the girls, and we kept believing. It cost a lot of energy, but when you win, you have the energy to celebrate this.”

Greece were expected to be France for a second time at this competition, and they did with ease, as Maria Myriokefalitaki hit five for Alexia Kammenou’s team.

The Greeks came out of the traps well after the first eight minutes. While Estelle Millot opened the scoring for the French with a fiery shot off the bar, two good goals from Olympiacos’ Maria Myriokefalitaki, as well as scores from Maria Patra, Eleni Xenaki put Greece in the ascendency. A tidy finish from Eleftheria Plevritou on the right made it 5-2 at the break.

France stepped up their game, and were putting pressure on Greece with some heavy-handed aggression. It seemed like France may have a spring in their step when Anna Collas made a great save from a Chydirioti 5m penalty. But a gorgeous lob from Athina Giannopoulou and a thunderous post and in goal from Margarita Plevritou gave Alexia Kammenou’s team a five goal lead at the break.

The goals kept coming for the Greeks in the third – Maria Myriokefalitaki secured a hat-trick with a stunning backshot at centre, before Eleni Elliniadi scored from a long way out.

Anna Collas, to her credit, made another heroic penalty save, this time from Vasiliki Plevritou. But she could do nothing to keep-out Maria Myriokefalitaki’s penalty – as the young Greek grabbed her fourth of the contest. It was 13-5 by the end of the quarter, as Ema Vernoux’s first time driven shot was cancelled out by a special lob by Eleni Xenaki.

With the result not in doubt heading into the back quarter, Myriokefalitaki added her 5th of the game, and the young Christina Siouti secured her brace.

Christina Siouti (Greece) – “It was a hard game, we expected that, France is a team that has a great performance throughout the year, for the Olympics in their homeland. It was a great match, but we showed our good face of the team”.

Emilien Bugeaud (France) – “We have played Greece three times in the last two months, and this kind of games, we have improved, so the girls liked this improvement. Greece deserved to win, they played better. We played without our centre today, so it was harder than it used to be. But credit to the girls, they have improved. It was what I was looking for, and a strong mentality.”

Alexia Kammenou (Greece) – “They are a hard team, they are fighting a lot. It was a difficult game for us. We played a good game in all the games except against the Dutch team – and this counts. I am satisfied with what we did, we are a young team, we made only a few training before coming here, and our average age is 21.6. We have to work hard, we have to be better in the critical games and we will work on that.”