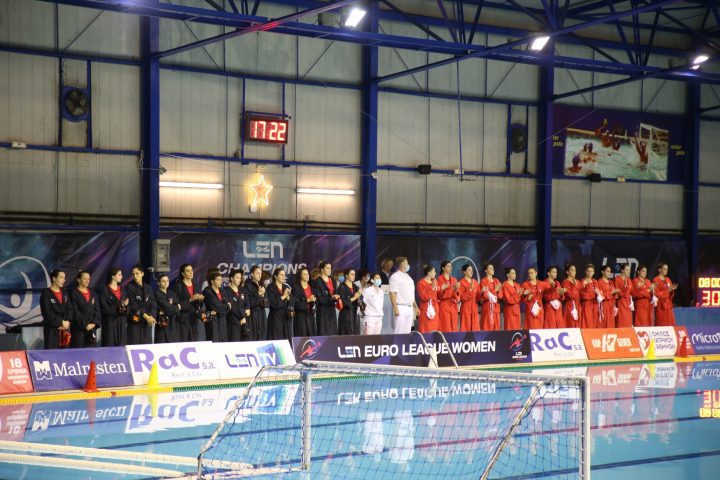 The Second day of the Womens Euro League Preliminary Round was full of exciting fixtures as five teams have already secured qualification to the quarter-finals. In Group E, Sabadell are through thanks to a great victory over Dunaujvaros, while both sides from Piraeus are already through having both won their first two games in Group F (before they face each other tomorrow). UVSE are also there in Group G, as they just about held off Dynamo Uralochka today. Plebiscito Padova have qualified for sure in Group H, but they will need to defeat KINEF tomorrow to determine who tops the group.

Sabadell have made it two from two with a hard-fought, 10-7 win over Dunaujvaros. The Spaniards were always ahead in the game, however Dunaujvaros pegged them back with a gritty and determined display. Only when Judith Forca scored a last quarter hat-trick (5 in total throughout the game) did the game look settled as a contest.

Mataro put their disappointing defeat yesterday to Dunaujvaros behind them as they bounced back with an energetic 14-5 victory over Ferencvaros. The two Spanish Anna’s (Gual 5 & Espar 4) did the damage in front of the goal, while Van der Kraats (2) Morell, Sevenich and Bach all beat Boglarka Neszmely in the Fradi goal. The defeat for the side from Budapest means they have nothing to play for but pride in their last group game against domestic rivals, Dunaujvaros. 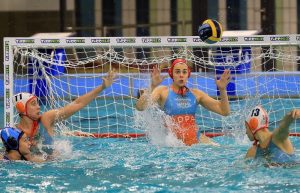 The two Greek sides are certainly making the most of the home advantage they enjoy today as they both enjoyed victories today – with both now securing a place in the quarter-finals of the competition.

Olympiacos beat the Italian side SIS Roma. Maria Myriokefalitaki netted a quad in the game, while Vasiliki Plevritou put away three as Nikoleta Eleftheriadou and Kyra Christmas both converted braces. Two of the best finishers in the Italian league (Cocchiere and Ranalli) scored hat-tricks for Roma, but it was not enough for them to avoid missing out on making the quarter-finals.

Elsewhere, spectators in Athens were really treated to a special match-up between Ethnikos and Terrassa – with Ethnikos only just edging out the Spaniards by 8 goals to 7. The goals for Ethnikos came from Ioannou (2), Haralabidis (2), Elliniadi (3) and Kontoni. 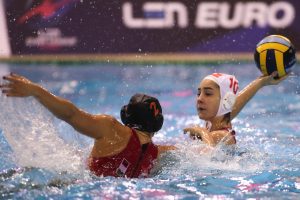 UVSE are top of Group G thanks to following up yesterdays defeat of Vouliagmeni with a narrow win over Dynamo Uralochka. The game was on a knife-edge from the start, but three unanswered goals in the last period from Keszthelyi (2) and Gabriella Szucs ensured that Marton Benczur’s side has one foot in the quarter-final draw. Dynamo will need a win tomorrow against the Nautical Club of Vouliagmeni to guarantee a place in the final 8.

Meanwhile, the all-time record winners of the Euro league, Ekipe Orizzonte, will not progress to the next round after suffering a narrow defeat at the hands to the much improved NC Vouliagmeni. Both teams led at certain times during the game, and the scores were level at 7-7 going into the last. However, Vouliagmeni had the composure and experience to see the game out  – with Stefania Santa and Maria Patra scoring the two winning goals in the last period. Going into the last few minutes Orizzonte perhaps lost their cool which perhaps cost them the game as they had four players wrapped out on three major fouls (Longo, Marletta, Di Mario, Santoro). 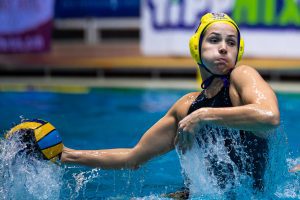 There was an incredible finish to the game between KINEF and Mediterrani as the experienced Russian keeper, Anna Karnaukh, denied the side from Spain to all three points with just 15 seconds to go. In an extremely tight affair, the result was hanging in the balance throughout the game, until Carla Toha Vilanova scored with two minutes left on the clock for Mediterrani. But as mentioned, KINEF’s keeper, dug deep and put away a very rare goal to ensure her side has a great chance of making the quarter-finals. Mediterrani will contemplate on what could have been had they seen out the match, but ultimately, they will not likely make the next round.

Padova, however, are top of Group H and have a 100% win record from their two Preliminary Round games – defeating Glyfada this evening in a enjoyable watch. Padova were deserved winners, but as usual this season, it was Mariia Borisova who really weighed in with an impressive goal contribution (5). NC Glyfada can not make the next round, but they can play for pride tomorrow when they can look to deny Mediterrani a place in the quarter-finals. 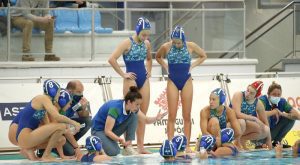