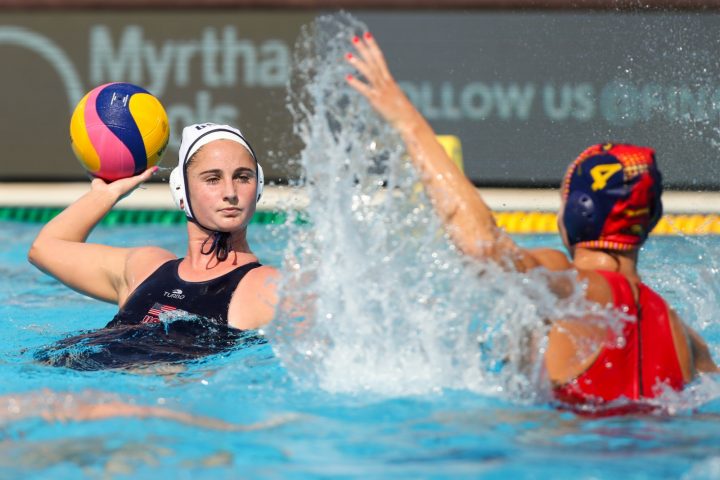 There was no doubt that the six time world champions and three time Olympic gold medallists were the better side today in the pool, as Adam Krikorian’s side worked well to deny Spain for large parts of the game. A scoreline of a game can often be misleading, but the result today perhaps flatters Spain. The United States did have to work for the result, but it was a result that they thoroughly deserved.

One of the great assets to this American side in terms of goals is the fact that on the left, they have Maddie Musselman (5 goals), and on the right they have Steph Haralabidis (6 goals) – who is making herself a leading contender for player of the tournament.

Maggie Steffens was typically solid with some big blocks in defence, and earnt her side a fair few extra-player situations, while Rachel Fattal is the glue that helps stick the national team together. Ashleigh Johnson saved a penalty, and made twelve saves for her side.

Two of Spain’s more experienced players, Judith Forca and Maica Garcia, both converted braces, but many of the other players in the team had very indifferent performances.

But the faces of  the Spanish players at the end of the game said it all. They were absolutely gutted, and yet again, they have been hurt at the hands of the United States. There is no denying that Spain are amongst the top teams at this championships, but it will be a huge disappointment that they will now not medal at the World Championships for the first time since 2015.

The United States drew first blood, and it was a Maddie Musselman shot from range that gave Laura Ester no chance in the Spanish goal. Adam Krikorian’s side doubled their lead as Steph Haralabidis continues to find the back of the net – the Ethnikos left-hander guided the ball well into the back of the Spanish net from Irene Gonzalez’s exclusion.

It took some time for the Spanish to get up to pace with the game, but once they did, they equalized almost immediately. Judith Forca’s accurate driven shot was too powerful for Ashleigh Johnson, while excellently accurate perimeter shots from Maica Garcia and Nona Perez put the score at 3-3 after the first eight minutes.

Into the second period, Spain took the lead emphatically. Bea Ortiz found herself on the left, and rifled the ball onto the bar before it dropped past a helpless Johnson.

But one of the best utility players in the world, Rachel Fattal, perfectly drove infield, and drew the penalty from Pili Pena, giving Haralabidis her second of the game.

Spain took then took a 5-4 lead via Judith Forca. On the right, she had a very narrow angle to drill the ball past Ashley Johnson in the American goal, but she picked her spot in typically clinical fashion.

However, the United States showed extreme calm and resilience, and turned the game on its head once more for 7-5. Both goals came just before the end of the quarter, and both were from the left. A clever bit of movement from Maddie Musselman gave her space to slot past Martina Terre, before Musselman turned from scorer to provider, with a lovely pop pass to Maggie Steffens, who converted from 4m.

Perhaps a big psychological blow to Spain was, after they conceded two quick goals, they then missed a big opportunity to go within a single goal from a 5m penalty. The 17 year old Elena Ruiz bravely swam to grab the ball, but couldn’t beat the flawless Ashleigh Johnson.

Early in the third, the United States made the difference between the two teams four scores, with yet another two coolly taken goals from the left-arm of Steph Haralabidis. Spain’s left-hander, Pili Pena, pulled one back for her side, but two goals in less than a minute, firstly an outrageous post and in goal from Musselman, and then a finish from Tara Prentice, put a real gap between the two sides.

While Spain kept trying to eat into their opponents lead, the United States turned their attention to defending. Perez, Ruiz, Nogue and Pena all had attempts well blocked by a number of American defenders.

Haralabidis though is making a serious bid for top goal scorer at these championships, with another two goals in the last quarter, taking her match tally to six goals.

Annie Espar (Spain) – “I think the third quarter was key, especially in defence. We started playing the game with good offence and we were well organised in defence. But we gave up some easy goals and that’s what gave them the victory”

Ashleigh Johnson (United States) – “It was a tough game. Spain are really worthy opponents and they have a lot of talent. But it was about grinding it out; every play, every possession, finishing it and we were very aware of their best players. Its all about teamplay when you’re playing two really great teams, not trying to win games by yourself. Its always a hard match up when you play against Spain, but team work wins”

Adam Krikorian (United States) – “It was so difficult. I have so much respect for them. They have a great combination of two incredible centres and great perimeter shooters as well, so you really need to be focused every possession, so I was really impressed with how we defended. I really proud of the resilience we showed in a tight game, and how we came out, and the third quarter made the difference. We are unfamiliar with Italy, and I am sure they are unfamiliar with us, so I’m sure it will be a fantastic game. I’m really excited to be under the lights, and feel the incredible atmosphere”