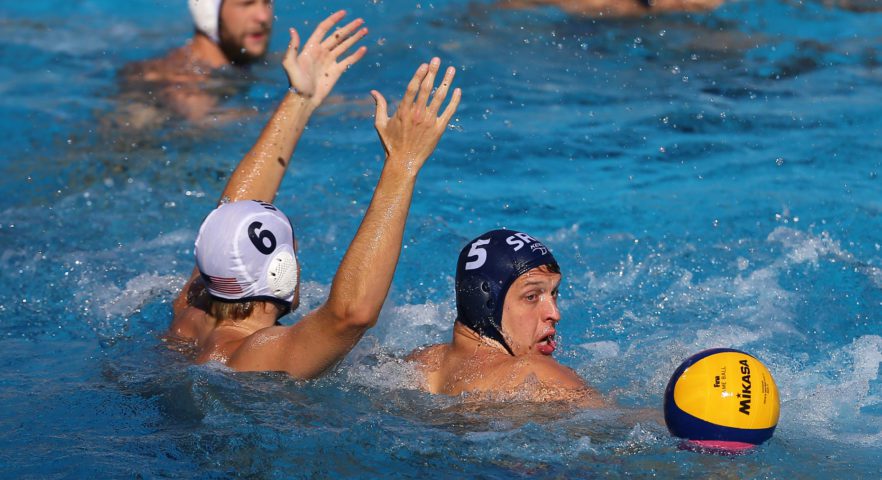 Ehrhardt (USA, 6) and Lazic (SRB) Photo by WPF of Serbia

As usual, a Christmas/New Year break won’t last for long for the best water polo players in the world this season.

The last Champions League matches in 2022 are on December 20/21 (Day 4). The League continues on January 10/11 with Day 5. Meanwhile, many clubs will play domestic matches, while some national teams will start preparing for the challenges in 2023.

Team USA, the reigning Pan American champion, will host World champion Spain and Olympic champion Serbia at the friendly tournament that will be held in Dallas and Lewisville. The three teams will play in a double round-robin tournament between December 28 and January 4.

Serbia’s new head coach Uros Stevanovic will make his debut on the bench of the senior national team in Texas. He announced the list of the players who will go to the USA.

Dusan Mandic will miss the tournament. According to an agreement with Stevanovic, Mandic will get a rest because he had a very active season and will rejoin his teammates in the following actions. Ferencvaros’ center-forward Nemanja Ubovic is after four years on the roster again. Stevanovic picked 18 players, but the list of candidates for the national team is much longer. He says that all players who have the right to play for Serbia are the candidates.

Serbia’s roster for the tournament in the USA –

Serbia and the United States played twice this year in the official games, both at the World Championships in Budapest (in the group and the 5th-place game). Serbia won both matches. Spain and Serbia faced once this year. The world champions defeated Serbia at the World League Super Final, where they won bronze, behind the 2nd-placed USA.
The Americans and the Spaniards didn’t meet in the official games at the major tournaments in 2022.