All tickets for the quarterfinals of the men’s Olympic water polo tournament were booked after the fourth day of the group stage.

There have been a few surprises in the group stage, but the teams that were expected to advance to the quarterfinals continue to battle for the medals: Italy, Greece, Hungary, USA (Group A), Spain, Croatia, Serbia, Montenegro (Group B).

Australia upset Croatia on Day 2, but it will finish the tournament tomorrow. Japan, Kazakhstan, and South Africa will play for their first (and consolation) points on Monday.

However, there are still a lot of open questions before Day 5. Three derbies will be played tomorrow.

Only one thing is sure. Team USA can’t move from 4th place in the group.

Italy, Greece, and Hungary are in the race for 1st place, and there are many possible outcomes regarding the classification 1st-3rd in Group A

Greece upset Hungary on Day 1 (10:9) and had a chance to practically secure 1st place already on Day 2. The Greeks led 6:2 in the match against Italy, but the World Champions came back, and the rivals shared points (6:6),

The fact that several teams can be equal in points complicates the situation even more. The FINA rules for tie-breaking differ from the LEN rules and rules in other sports.

According to the FINA rules, if two teams are tied with equal points, ties will be broken as follows:

1) The winner of the match between the two tied teams will be placed higher.

2) If the game between the two teams was tied, then the results achieved by both teams against the highest placed team (or teams, if tied) in the group shall be considered, based on goal difference, and if still tied, then based on goals scored.

3) If still tied, the results against the next highest placed team (or teams, if tied) shall be used as above, in succession until all results have been considered.

4) If still tied, a penalty shoot-out will determine which team will be placed higher. The penalty shoot-out competition will be held following the final game of the round or at the first practical opportunity.

If Greece and Hungary are tied, Greece will be ahead of the Hungarians because it recorded a win over Hungary. There is a possibility that Hungary and the USA will be tied, but Hungary defeated the USA, and the Americans can’t overtake the European champions.

But the encounter between Italy and Greece ended in a draw (6:6). There will be many possible outcomes if these two teams remain equal in points.

Hungary and Italy will face off in the first match of the last day. After that Greece will play against the USA. Let’s see what can happen.

-If Italy beats Hungary with a two-goal difference or more convincing, Italy will remain atop the group, Greece will finish 2nd, and Hungary in 3rd place.

In any other case, everything will be open until the end of the match Greece – USA.

These are some of the numerous options:

-If Italy beats Hungary 10:9 (the same result was achieved in the match Greece – Hungary) and the Greeks defeat the Americans, the results against the USA will be considered. Italy defeated the USA 12:11. That means that Greece will have to beat the Americans with a two-goal difference or to achieve a one-goal win with 13 or more goals scored to climb to 1st place.

-If Hungary beats Italy and Greece wins a point against the USA, Greece will finish in 1st, Hungary in 2nd, and Italy in 3rd place.

-If Hungary beats Italy and the USA defeats Greece, the final standings will be 1. Hungary, 2. Greece. 3. Italy.

The situation in Group B is less complicated. Spain and Croatia will play in the match that will be decisive for 1st place, while Serbia and Montenegro will battle for 3rd place.

Spain is the only team that recorded four wins in the first four days of the male tournament. Croatia recovered from a shocking loss to Australia (8:11) and beat neighbors Montenegro (13:8) and Serbia (14:12) to secure 2nd place.

The Croats have two points fewer than the Spaniards, and only a win will bring them 1st place. Spain will stay atop the group if it doesn’t lose to Croatia.

Serbia and  Montenegro have won four points each. Montenegro will move to 3rd place only if it beat Serbia. The reigning champion needs a point to keep 3rd place. The results against Spain or Croatia will be considered if Montenegro and Serbia share points. Serbia is better than Montenegro in both combinations: Serbia – Spain 12:13, Montenegro – Spain 6:8 or Serbia – Croatia 12:14 and Montenegro – Croatia 8:13. 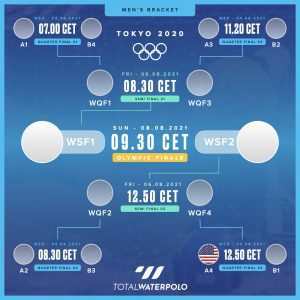 Click for full size (Note: The schedule of the quarterfinals is subject to change upon to requests of TV broadcasters)

The battle for 3rd place in Group B maybe isn’t so important. The third-placed team won’t have a much easier task in the quarterfinals than a team that will finish 4th. Potential rivals to Serbia and Montenegro are Italy, Greece, and Hungary. These three squads are of the more or less same quality, and the results in Tokyo proved that. Accordingly, 1st place in Group A maybe has no big importance. There is no significant difference between Montenegro and Serbia.

But, nobody likes to lose. Each win will be encouragement before the quarterfinal round, which is the most essential phase of the Olympic tournament. Teams that pass their quarterfinal hurdles will be just one step away from a medal.

All in all, seven quarterfinalists are serious medal contenders. The American team is the only quarterfinalist, which isn’t considered as a team that can reach the podium. So, 1st place in Group B might be a solid advantage for Spain or Croatia. But, the USA showed that it had improved its play a lot in the last few years. USA’s games against Italy and Hungary in Tokyo were pretty even contests (Italy secured a win in a thrilling finish). Montenegro recorded a narrow victory over the Americans in the World League Super Final. So, nobody shouldn’t underestimate the USA, the youngest team of the tournament.