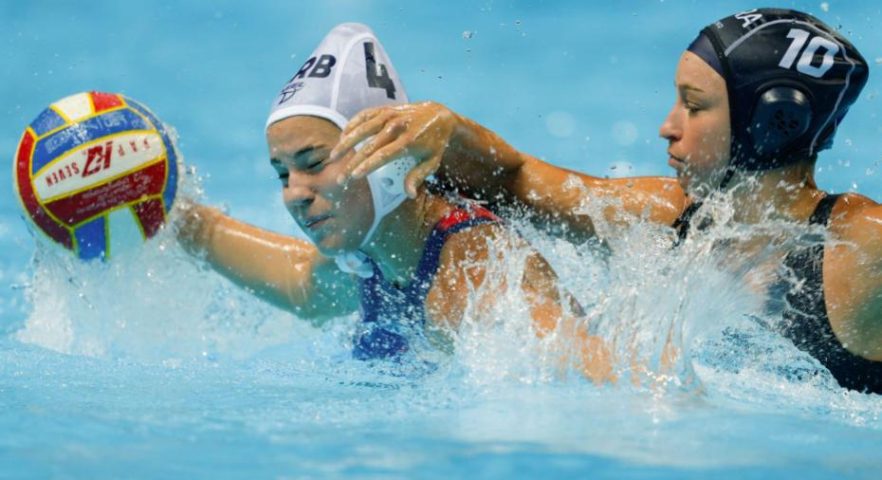 After four matchday’s in the women’s tournament at the 35th European Championships in Split, the group stage of the competition ends tomorrow.

Four teams have mathematically guaranteed their exact places in the quarter-finals; the Netherlands and Italy are currently atop of both pools and will remain there no matter what happens on the final round of pool games. Greece and Spain occupy the second berths in both groups, and also cannot finish lower than this ranking.

But an intriguing situation is presenting itself in group B, with three teams looking to book only two tickets into the final eight of the competition. 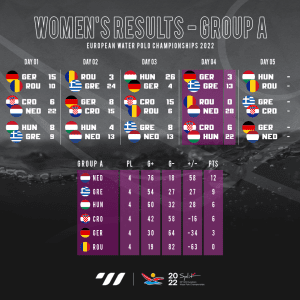 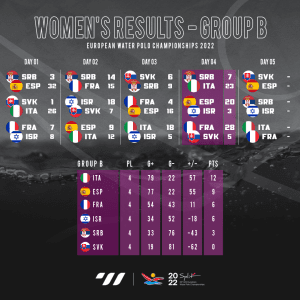 In real terms in Group A, Hungary and Croatia are also safe. Hungary’s 22-6 against the hosts yesterday ensured that Croatia can’t overtake them, while Croatia’s 15-8 victory over Germany on the second day means, even if Germany were to cause a huge upset and beat the Netherlands, Croatia would still progress on the head to head rule.

The final Group A games to be played tomorrow include a daunting contest for Romania against Hungary, before the hosts Croatia will try to get something from their match with Greece. The last game of the day is between a underwhelming German side, who take on the free-scoring and confident Dutch.

Meanwhile, Group B is more interesting. Currently sitting in third is France – who have six points, and who face Italy tomorrow. Below them are Israel (who are also on six points) and Serbia. Both of those teams meet tomorrow. Should Israel beat Serbia, they will progress into the quarter-finals as the third best team in Group B, and France will finish fourth in the group. However, there are scenarios in which any of the three teams could miss out on the quarter-finals.

Theoretically, If Serbia should beat Israel, and France lose to Italy, we will find ourselves in a situation where three teams will be level on six points. The classification is then established based on the following procedures:

i) Only the points gained in those matches played among the teams with equal points shall be decisive.

This essentially creates a mini-league between the three teams in Group B.  For a situation where Serbia beats Israel, this would mean that there would still be an equality of points (each team in the mini league level on three points), so the teams must be separated by LEN’s next procedural principle.

ii) If there is still equality, the classification shall be established according to the goal difference from only those matches played among the teams with equal points.

Looking at the results in the new ‘mini-league’ between the three teams so far (France 7-8 Israel & Serbia 14-15 France), Israel has a goal difference of +1, France 0 and Serbia -1.  So essentially, according to the provision about goal difference from the matches played between the three teams level on points, Serbia simply need to beat Israel to secure a place in the quarter-finals at Israel’s expense.

However, there is a very unlikely scenario where France miss out on the quarter-finals:

iii) If there is still equality, the classification shall be established according to the highest number of goals scored in the matches played among the teams with equal points.

According to rule iii), if Serbia beats Israel by a one-goal margin and with 17 or more goals, then Serbia will go to quarter finals from 3rd, and Israel from 4th place, while France will drop to 5th place. In this scenario, Serbia would have scored 35 goals, Israel 24 and France 23, meaning France would fall into fifth place in Group B.

In summary though, if Serbia win their final game tomorrow against Israel, they will progress to the quarter-finals instead of Israel.

The other two games in Group B tomorrow should be formalities. Spain will see how many goals they can put past Slovakia, and while Italy will have a tougher task against France, they should still get the job done without too much trouble.

Road to the final

The format of the tournament is simple. The team that finishes top in both groups (the Netherlands and Italy) will face the fourth placed team in the other group, while the runners up in each respective groups will meet the third place team in the opposing group (i.e A1 vs B4, A2 vs B3, A3 vs B2 and A4 vs B1).

The bottom teams in both groupings, Romania and Slovakia, will play a final eleventh place classification game, while Germany, who cannot qualify for the quarter-finals, will play in the ninth place play-off, against either France, Israel or Serbia.