Szolnok won its first-ever LEN Euro Cup after a thrilling second leg of the final against OSC in Budapest.

The winner was decided after a penalty shootout. OSC recorded an 11:8 win and caught up with Szolnok in the aggregate score (Szolnok won 14:11 in the first match), so the game entered the shootout. Szolnok’s goalkeeper Viktor Nagy was a hero of the penalty drama. He blocked three shots by OSC’s players. On the other side, Nagy’s teammates made no mistake, they scored three goals in a shootout for the final score – 11:11.

The match was exhilarating. The lead was constantly exchanging, and OSC earned a 3-goal lead in the finish. Both sides had chances to secure the trophy in the regular time. Still, everything was decided in the penalty drama.


Szolnok earned a 2:0 lead with two quick goals in two consecutive attacks in the middle of the 1st quarter (Konarik and Kovacs), but OSC managed to equalize before the first break.

Szolnok took the lead twice in the second period (3:2, and 4:3), but OSC responded with an equalizer after each of the two goals. Balazs Erdelyi converted a man up in the 15th minute to put OSC in front for the first time in the match (5:4). But, Akos Konarik responded immediately, in the same manner. He scored with an extra player to make it 5:5.

The third period was also balanced. OSC’s Kristof Szilardi opened the quarter with an action goal for 6:5. Midway through this quarter, Szolnok netted two goals within 46 seconds (Filipovic and Schmolz) and the visitors regained an advantage (7:6). After that, defenses dominated, both teams missed a few chances with a man-up. Salamon closed this period with an action goal in the 23rd minute for 7:7.

Balazs Erdelyi opened the final period with his 4th goal, this time from a penalty shot to give OSC a new lead – 8:7 after 32 seconds of play in this quarter. Akos Konarik leveled at 8:8 in the 26th minute. However, OSC took control after that. Marton Toth found the net for 9:8 in the 28th minute. Balazs Erdelyi scored for 10:8 with 03:09 minutes to go, and the distance between the sides was two goals for the first time. The game has been becoming more and more exciting. Centre-forward Balasz Harai netted for 11:8 in the 31st minute, and OSC, finally, erased the deficit from the first match. After that, Szolnok wasted a man-up. OSC also had a possession to secure the win in the regular time, but the hosts failed to score, and the game entered the shootout.

Viktor Nagy saved three shots. On the other side Filip Filipovic, Adam Nagy and Akos Konarik found the net, and Szolnok’s celebration started.

There were a lot of exclusions in the match, but not many power-play goals. OSC scored just one goal with an extra-man advantage (1/15), and one from a penalty. Szolnok’s man-up conversion was slightly better (2/14). Viktor Nagy was a hero of the shootout, while he saved nine saves in the regular time. OSC’s Marton Levai collected five saves.

Filip Filipovic is the only of Szolnok’s players who won the LEN Euro Cup before this year’s final. He did it playing for Radnicki Kragujevac in 2013. 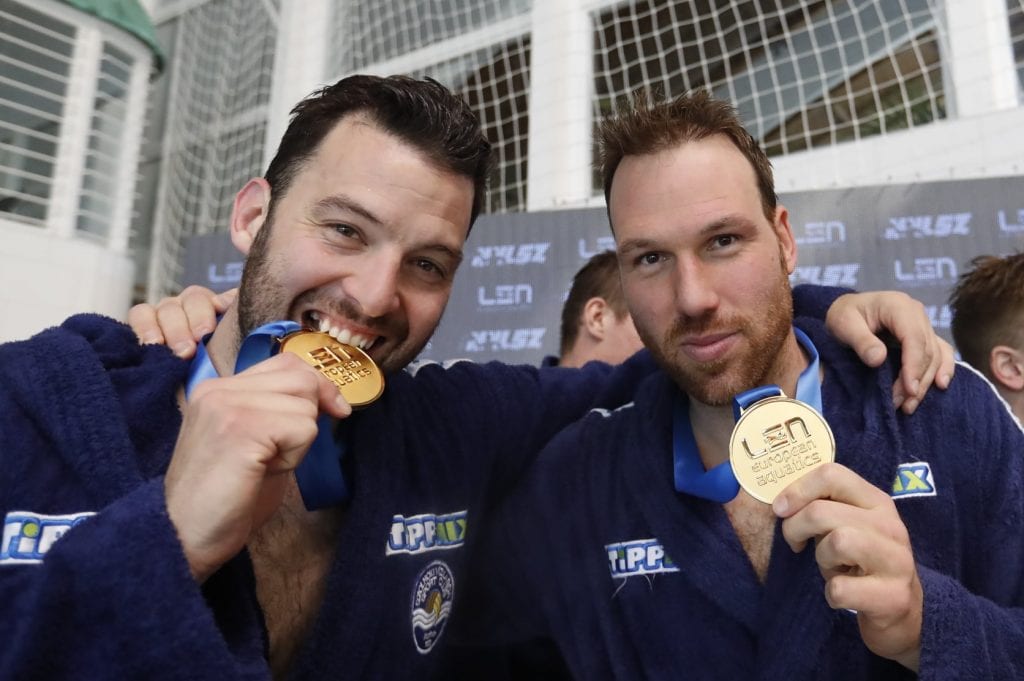 Two OSC players have one LEN Euro Cup each. Marton Toth clinched the trophy with Ferencvars in 2017. Ferencvaros successfully defended the trophy in 2018, and Krisztian Manhercz played for the winning team that year. OSC coach Daniel Varga was a member of Ferncvaros’ winning teams both in 2017 and 2018.

Gocic: You have to work for the luck

“I’m very proud of the team, the players worked like hell since July and now here we are, with a trophy in our hand. It was another tough match, OSC played very well, we just couldn’t score after 7-6, if we went two up that would have ended the match. Instead it was left to the penalties but I don’t agree with those who say that is all about luck. You have to work for the luck, you have to practice the shootout, you have to be ready mentally and Viktor Nagy did a great job in all sense.”

“We can talk about a lot of things if we wish to find out what made the difference. Small things, a block, a fine shot, a bad pass… It was a final of eight periods so we can also recall the last minute of the first leg when we trailed by only one goal but at the end we lost by three – I guess, it would have been a different match today if it starts from a single-goal difference. Anyway, I have to be very satisfied as this team has come here after covering a very long way. I don’t think many people would have said last summer that this team could reach such level by this time. We are now close to Szolnok, we are close to Ferencvaros, the team has a character, a recognisable playing style and that’s a great achievement in my opinion.”