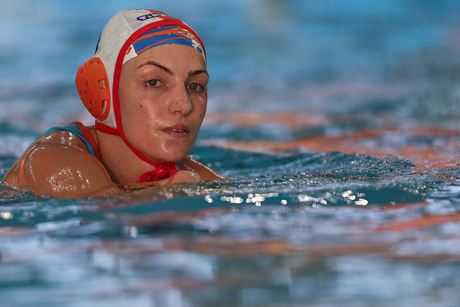 Despite the top two teams in the country remaining unbeaten, matchday 6 of the Hungarian OB I was very entertaining with victories elsewhere for Ferencvaros, Eger and Keruleti. In a battle of goals scored, Greta Gurisatti scored 6 against BVSC, but Rita Keszthelyi-Nagy thought her 7 goals against Szentes would be unassailable. However, Eger’s Dora Czigany netted 8 in her match against Szeged. At Szentes, even Hungarian national team keeper, Alda Magyari, managed to find the back of the net!

Keruleti have lift-off as they secured their first points of the season at home to Tatabanya. It was Gerda Brezovszki, Keruleti’s highest profile player, who made the difference in the match, securing an impressive six goals. Keruleti’s veteran, Dora Kisteleki, netted a hat-trick.

Lukacs Denes’ side will be relieved to secure their first points, but know now is not a time to sit back. They face an away trip to Szeged up next, which could be a very interesting game. Tatabanya, on the other hand, will hope they can take advantage for Szentes’ dip in form, as they host the side from the south in two weeks time.

It is still all smiles for Dunaujvaros as they keep their unbeaten start to this season going with an away victory against BVSC. Hungarian international, Greta Gurisatti, once again proved why she is amongst the top players in the world, with another 6 goals to her tally (26 for this season). Dunaujvaros stay second in the league on goal difference.

Alexa Gemes scored another hat-trick for the home side to continue her good form this season. Dora Leimeter and Kata Meszaros Farkas also both secured two goals each, but this loss drops BVSC to fourth – three points adrift of FTC.

It was another tough day for this young Szentes side as they were beaten by a quality UVSE team – who now look in good shape for their European conquest in the coming week. By far the best scorer in the league, Rita Keszthelyi-Nagy, netted 7 goals for the second game in a row, while there were spoils for Doral Abel-Antal (3), Gabi Szucs (2), Panna Macsai (2) and Kinga Peresztegi Nagy (2).  UVSE’s keeper, Magyari, even got in on the goals, as the visitors won the second half 10-0.

Tamara Kolarova scored twice for Szentes in the second and third quarter.

UVSE stay top of the league thanks to their superior goal difference, but will face their toughest opponents so far this season as they welcome BVSC-Zuglo to Hajos. Szentes, who have handed out many debuts to young players recently, will hope their trust in such players will pay dividends as they face Tatabanya away at 16:00pm on 27th November.

Gyor remain rooted to the bottom of the league after an unsurprising but spirited defeat to Ferencvaros  – who are now up to third. It was a hat-trick of hat-tricks for the green, white and black of Fradi that helped them on their way by Dalma Domsodi, Panna Pocze and Vivien Kovesdi.

With the break in games, Gyorgy Gerendas now has some time to prepare for FTC’s next fixture, a tough one, against the formidable Dunaujvaros. Gyor, who also have thirteen days before their next game, look down the barrel of a seventh successive defeat should they not get anything from their next match against Eger.

A good start in the game and a strong beginning to the last quarter was enough for Eger to see off the visiting Szeged. It cannot be ignored that the twenty-nine year old, Dora Czigany, scored an incredible eight goals in the game.

Reka Miklos, who was playing against her former side, netted four, but that was not enough to seal the points for her side, who sit in 7th place in the OB I.