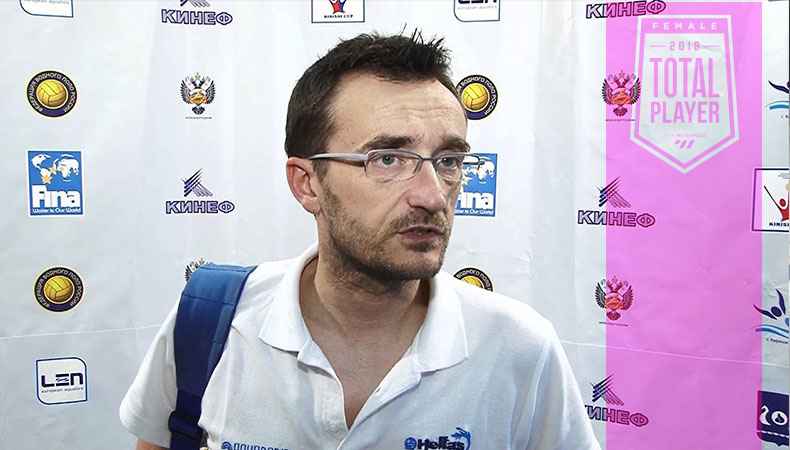 The latest vote for the Female Category comes from Greece and Giorgos Morfesis – the head coach of the Greek National Team.

In 2010, Morfesis made a big entrance into the National Team as a head coach, winning the silver on the European Championships in Zagreb. The next year his success multiplied when Greece went for the for the gold at the World Championships in Shanghai. Also, there are two bronze medals Morfesis got on the 2010 and 2012 FINA World Leagues.

Even though the Greek National Team had some seriously great candidates, I will not be biased in my vote. I think that my players had a perfect season, winning three medals in big competitions (Europa Cup, European Championships, and Mediterranean Games). They played against great opponents to which I’ll give my vote.

It means a lot to me to see the other coaches giving their vote to the Greek players. I can mention Alexandra Asimaki, for example, who is at the top of the water polo world currently, or Chrysi Diamantopoulou, who was the key part of our success last year.

“Prokofyeva is an established player who’s not only intelligent in play and quick in the pool, but she dissolves the opponent in only a few minutes. These are the main reasons she’s the leader of her team and she took them to the top of the Women’s Champions League for the first time.”

“There are many high-level players in the USA at the moment, but Seidemann is the key one for any special situations in the defense. She’s also crucial in any attacks when the team cannot find a solution or encounter difficulties in the pool.”

“Steffens is overall a great player. Besides giving her best as a player, she’s the coach from the water! Her ability to lead training and matches is beyond comparison.”

“The type of player who can carry the team’s troubles on her own shoulders. Her energy led the Netherlands to the gold medal at the European Championships. On top of that, she has great shots.”

“Ortiz is the most improved and professional player in the Spanish Team. With Maica Garcia and Espar, they are forming a trio that can pierce defenses and lead fast attacks across the pool. She’s also an exceptional character in and out of the pool.”