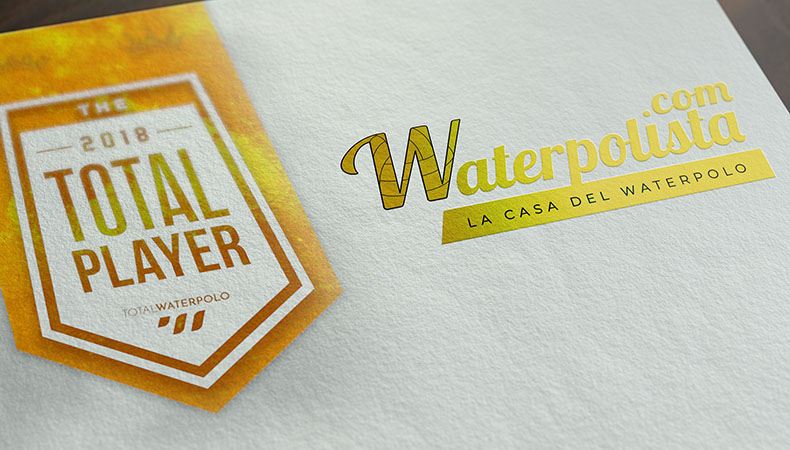 Today’s web portal to join the Total Player 2018 is Waterpolista – a Spanish website focused on regional and worldwide water polo.

The portal started its work in 2014 with an intention to promote the sport in Spain and offer valuable insights for the regional fanbase. Up to this day, they’re keeping up with the best sites, providing their readers with full-on match analyses, interviews, and general news.

Waterpolista joins our Award for the second time, adding the Female Category to their professional pick.

“In these times we must reward the work of the goalkeepers, whose effort is usually set aside. CN Atlétic Barceloneta’s goalkeeper is the pillar for the club (third at the Champions League) and especially for the National Team. At the Europeans in Barcelona, he led the team and became the key figure for winning the silver medal that a few would have ever expected. He is a great person but above all a great professional capable of achieving the unachievable. Without going any further, he was very close to overcoming 80% of effectiveness this summer in Barcelona.”

“Just to speak about Perrone seems unnecessary – the man’s play alone is worth the entire team. He makes the difference, he is one of the best counter-attackers, he is great at assisting and he also scores greatly. All this accompanied with a unique ability to direct his teammates in the water. He makes his team better and that is something that he has proved not only in CN Atétic Barceloneta but with the Spanish National Team, where he had a decisive role during the Europeans this summer.”

“Pro Recco’s star was the best in the whole Serbian team at the European Championships in Barcelona, where he was chosen the MVP, though it was a surprise to a lot of us. Still, he was decisive when his team needed him the most. Additionally, he had a great performance with his team at the club level, especially in the Champions League.”

“Fountoulis has become the classic player of Greek water polo. Although he had a discreet performance in the European Championships in Barcelona, the truth is that his four goals in the Champions League final in Genoa tipped the scales in his team’s favor and eventually allowed Olympiacos to clinch the title.”

“Once again we’d like to highlight the performance of a goalkeeper. The Olympiacos’ captain was named the best goalkeeper in the Champions League Final Eight. And he completely deserved it. He was the great savior for the Hellenic team. He made a difference after he was able to neutralize the main attackers of Pro Recco, who ended up desperate because of Pavic’s great saves.”

“Aarts was one of the key figures that led the Dutch to gold in Barcelona, 2018. With just 21 years, she has skills that can only be found among the top-quality athletes. The Dunaujvaros’ player is a clear example of an athlete with a winning character.”

“Asimaki is an excellent player and for many the best one in Greek history. At 30, she managed to gain a decisive role in the National Team. The buoy is able to turn a game upside down and not throw in the towel at any time. In the European Championships, she was responsible for neutralizing the Spanish National Team, leading her team to the silver medal. She is proof of the great situation in Greek water polo.”

“With 25 goals scored, the Catalan player finished the Europeans in Barcelona not only with the bronze medal but also as the top scorer. She was the best player of the Spanish team at all times. The gift for scoring goals makes her worthy of being in this selected group of players.”

“Hungary is always among the best national teams on the international scene. In the Europeans, they stayed close to reaching the podium, after Spain snatched the bronze medal in the third-place finals. In spite of this, the impressions that Rita left made her worth being among the best five players of the year, and even more if we take a look at her entire water polo career.”

“Despite performing far below expectations in the European Championships in Barcelona (Russia finished fifth), Prokofyeva was not only the most important player in the offense for the Russian national team, but she was also one of the key players in the European success of her club Kinef Kirishi. She was Kinef Kirishi’s MVP, the two-time European champion.”